Skipjack tuna is a medium sized fish with a distinguishing black strip from behind its back to the tail. Found abundantly in most parts of the world ocean, skipjack tuna has dominated the world tuna market. It is marketed fresh, smoked, salted and canned.

The skipjack tuna fish has a distinguishing dark lines extending towards the tail from behind the corselet back. They have a silvery lower flank and belly. It has a deep purplish blue back. Their teeth are conical in a single row.

Skipjack tuna are pelagic species which live in open Ocean. They swim near the surface during the day and descend to depths at night. They form a school based on their size along the drifting object or whales and sharks. Schools of skipjack tunas are often found at the convergence of warm and cold water.

Skipjack tuna reach their sexual maturity in about a year when they are 40cm in length. They spawn throughout the year in the equatorial waters. The female lays eggs depending upon its size and are capable of laying around two million eggs a year. The eggs are pelagic and move to the cooler waters along with the ocean current.

Skipjack Tuna have a life span of about 7 to 12 years.

Skipjack tuna are highly migratory. They originate at the equatorial water and migrate towards north and south forming a school associating either with drifting objects or whales and sharks.

Skipjack tuna primarily feed on fishes, mollusks, lantern fish, cephalopods and crustaceans. This fish feeds near the surface and their diet mostly consist of squids, shrimps, small mackerel, herring, sardines and anchovies. This species has cannibalistic nature. Skipjack tuna are active in foraging during dawn and dusk and are mostly found near convergences of varying temperature due to availability of abundant food supplies.

Skipjack tuna fall prey to larger fishes such as billfish, sharks, larger tunas, wahoo and yellowfin tunas. Seabirds and humans also prey them down. Skipjack tunas are cannibalistic in nature.

Skipjack tunas are found abundantly in many parts of the world’s ocean. In recent times, skipjack tuna has dominated the tuna market. The speed at which they mature and reproduce has lead to a large scale commercial and recreational fishing of skipjack tuna. Skipjack tuna is sold fresh or frozen and is also one of the common canned tunas. It is common in one of the raw fish dishes. Dry skipjack tuna are popular in Japan and is known as “katsuobushi”.

Skipjack tuna is a good source of:

Skipjack Tuna is a very nutritious food. It is a rich source of protein, potassium, manganese, Vitamin B1 and B6 and essential fatty acids.

Skipjack tuna has rich meat and strong flavor. They are canned, smoked, salted and dried. Here are some of the recipes for skipjack tuna:

Skipjack tuna are not considered as an endangered species. According to the World Conservation Union Redlist, skipjack tuna do not fall under immediate threat. However, skipjack tuna in Atlantic Ocean has been showing a decline over the recent years. Harvest and import of the skipjack tunas are regulated by the National marine Fisheries Service.

Here are some of the pictures of Skipjack Tuna. 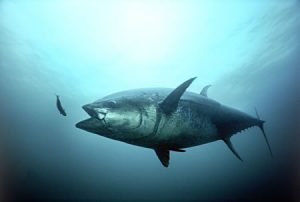 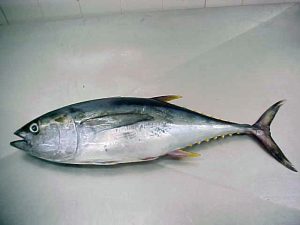