Ocean sunfish is the most odd looking fish species in the world. It is the largest and heaviest bony fish recorded. Though this fish species is not hunted commercially yet they are killed for their meat and liver oil as well as for sports.

Size: An adult fish may grow about 11 feet long.

Weight: This species weigh about 100 kgs in average. Some Ocean Sunfishes have been recorded weighing more than 2000 kgs.

Body: This fish has a round shaped and laterally flattened body with leathery, thick and scale less skin.

Color: Their color is olive-brown, black or grey with silvery reflections. Some carry various kinds of spots on their skin. 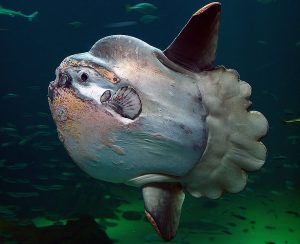 This fish can be found in tropical and temperate ocean waters across the world. Generally, this fish cannot be found in colder oceanic regions, but they have been spotted in British Columbia and Alaska region. They are also found in some parts of the southern hemisphere region except Antarctica. This species have been rarely spotted in the Arabian Sea. This fish is also found in the Mediterranean Sea that has cool ocean temperature.

This fish species can be found in and around the depth of 350 meters from the water surface level. They have been spotted to go down to a depth of as much as 1800 feet in search of food. They can be found several miles away from the shore. This species is generally spotted in small groups.

Ocean sunfish is the most commonly found species of sunfishes.

Their breeding season is not known. This species breed in tropical and subtropical oceanic waters across the world. Female Ocean Sunfish lay the highest number of eggs amongst any known vertibrates, producing as much as three million eggs at a time. The eggs are externally fertilized.

Their larva, which looks like a small regular fish, is about 1/10 of an inch long. Ocean sunfish fry has long pectoral fins. During daytime they have a tendency to stay in ocean depths and come near the ocean surface at nights. 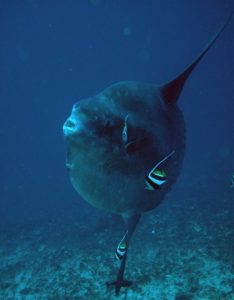 The lifespan of this species has not yet been determined in its natural habitat. But in captivity, Ocean sunfish may live for about 8 – 10 years.

This species do not have too many natural enemies. They are preyed upon by the great white shark and other large shark species. At times, they are attacked by killer whales and sea lions. Generally sea lions hunt them only for sports by tearing off the fin as well as flesh from the body. Young Ocean sunfish is most vulnerable as they are preyed upon by various fish species like mahi mahi and bluefin tuna.

Ocean sunfish is among the least concerned fish in the group of finned fish. It is not yet ranked by the International Union for Conservation of Nature (IUCN).

Here are some pictures of this odd looking creature 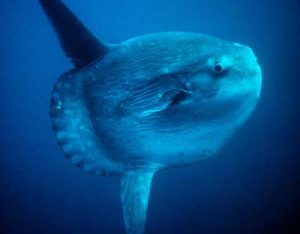 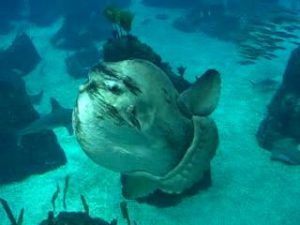