The Moon Jellyfish are found in the tropical waters of the ocean and are known for their beautiful appearance. Also called ‘saucer jellyfish’, it isn’t yet fully understood by the scientists as to how long these jellyfish have been on the earth. These invertebrates are bioluminescent (glow in the dark) and a favorite item in the aquarium pet trade. In some highly populated tourist beaches, they are found in large numbers, while measures have been taken to limit their populations.

Body: The body is translucent, with almost all the internal parts visible from the top. These creatures can be recognized by their four characteristic horseshoe-shaped gonads, having a faint purple hue. Younger individuals often have patterns of spots and streaks. 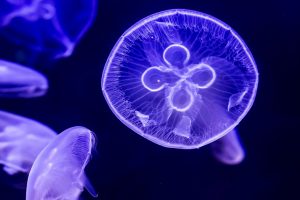 The creatures have several subspecies; however, they look so much alike that it is practically impossible to differentiate between them without taking their DNA samples.

The moon jellyfish will live for about a year (both in the wild and in captivity/marine tanks).

They are mostly found in the warm and tropical waters around the world near the coasts of the Atlantic, Pacific, and the Indian oceans. However, they are more common in the Monterey Bay along the coast of California, and in the open waters close to the East Coast, Japan, Gulf of Mexico, and Europe.

Like most other jellyfish species, the moon jellyfish move around horizontally, swimming by pulsation of the bell-shaped upper part that always stays close to the water surface. This behavior let them keep their tentacles spread over a larger area and help them capture food at ease. They sometimes migrate in small groups in search of food.

A group of jellyfish is termed as ‘smack’, and when several smacks gather together to form a larger group, it is called a ‘bloom’. A single bloom may consist of more than a thousand individuals. However, the formation of bloom depends on several factors, including the water’s oxygen content, ocean currents, nutrients, and temperature. These creatures invade their prey by using their stings and injecting nematocysts present in their tentacles. 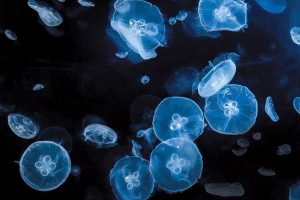 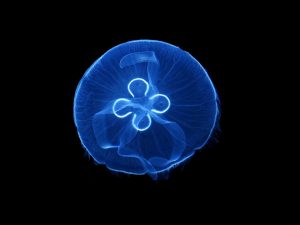 Diet: What Do Moon Jellyfish Eat

The breeding season of the moon jellyfish is during spring and summer. They are oviparous, while the eggs mature in the female jellyfish’s gonads that are the most recognizable part of these creatures since they are brightly colored. These organs are placed inside the pockets that are formed by the oral arms’ frills and are positioned at the bottom of their stomachs. The eggs get fertilized after the female ingests strands of floating sperm released by the male jellyfish.

As the eggs get fertilized, they are released by the female, which eventually transform into larval forms called the ‘planula’. These newly-developed creatures float on the water surface until they find a hard surface to cling to, and finally turn into a polyp.

When the conditions are favorable, the polyp divides, and the tiny jellyfish swim away individually. At this stage, they are called the ‘ephyra’. It is from this stage that the baby jellyfish metamorphose into adults. 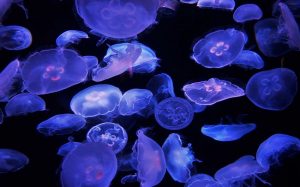 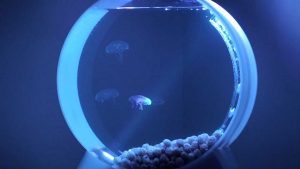 Their primary enemies are the other larger jellyfish, and big-sized open water creatures including the ocean sunfish, spadefish, tuna, swordfish, and the leatherback turtle.

Do Moon Jellyfish Sting (Are they Poisonous/Dangerous)

The tentacles of this vertebrate are poisonous to some extent, but only to the small marine creatures. They are practically harmless to humans. People are not affected by their poisonous bites since the venom (toxin) does not penetrate human skin.

The IUCN has enlisted them under their ‘Not Evaluated’ category. 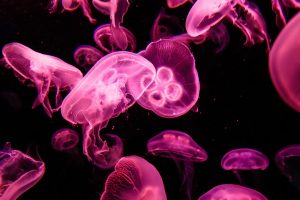 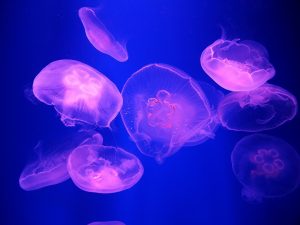