The Manowar Jellyfish is a species of marine hydrozoan that is biologically not a true jellyfish, even though its features make it look like one. These creatures are extensively spread throughout their range and are known for their venomous and extremely painful stings.

Body: The main part of the body (above the tentacles) is soft and sluggish, and the entire creature is made up of four organisms, with each one being responsible for performing individual functions.

Pneumatophores: Also called ‘floats’, this organ is a long bladder, filled with gas, and is formed as an overgrown polyp resembling a closed bag. These are blue in color. The top part of the purple float has a hue of pink running through it. 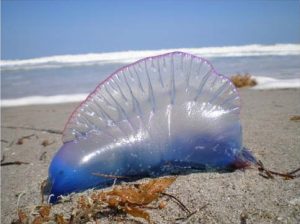 Sexual Dimorphism: Does not exist.

Is a Portuguese Man of War a Jellyfish

As mentioned, this creature does not fall under the group of true jellyfish, though its features make them look like one. They are basically siphonophores. Siphonophores are creatures that may look like one single organism but are basically colonial organisms made up of small individual creatures called ‘zooids’, each one of which has its own function for the survival of the entire cluster.

Similarly, the Manowar is also made of four different polyp types:

They live in the warm, saline waters of the Atlantic, the Pacific, and the Indian Oceans.

The man o war jellyfish has not yet been classified by the IUCN. 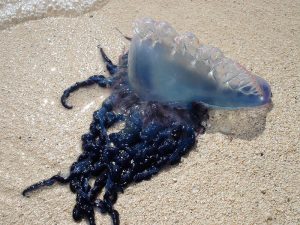 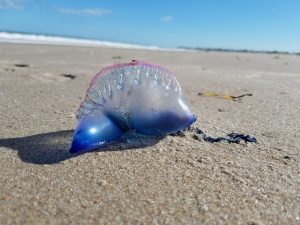 Movement of the Manowar is not self-motivated, but generally passive, as they are driven by the ocean current and wind. These creatures cannot swim but float in colonies with the help of their pneumatophores.

Some Men-of-War are ‘left-sided’, while the others are ‘right-sided’. While the former drifts at an angle of 45° in the right direction from which the wind is blowing, the latter does the opposite. This difference in individual features is important on their part in order to spread more evenly throughout the warm oceans of the world.

Almost 70 to 90% of their prey are fish, both young (fry) and adults. They would also consume shrimp, other crustaceans, as also, other microscopic to tiny creatures like plankton.

The dactylozooids (tentacles) that are usually about 30 feet in length, use venom-spewing cells to deliver painful, neurotoxic stings. The venom is enough to kill most of their prey, and rarely humans.

Ways for medical sting treatment have been highly debated; however, in 2017, a study in the science journal ‘Toxins’ recommended vinegar to wash away the remaining nematocysts, if any, after the tentacles are removed. Finally, the affected area needs to be soaked in hot water with a temperature of 45° C (113° F) for approximately 45 minutes. 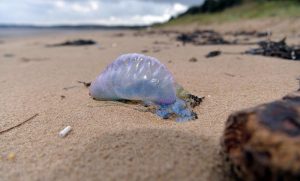 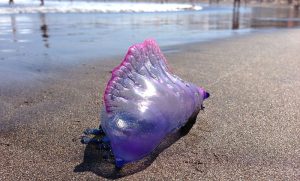 The process of fertilization is external, with the creatures shedding their gametes into the water. The sperm from a colony fuses with the eggs of another colony.  Though, the reason for this process of this spawning cycle is still unknown.  However, this marine hydrozoan would also reproduce asexually by the process of mitotic division or budding.

Manowar jellyfish are the natural diet of the loggerhead turtle and the ocean sunfish. They are also consumed by large octopuses like the blanket octopus. 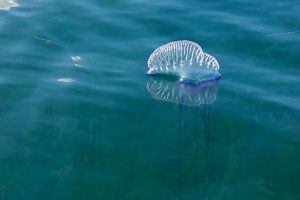 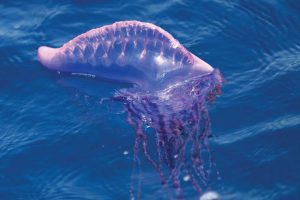