What Is A Gopher Tortoise?

As its name suggests, it is a special species of tortoise. It is a cold-blooded animal that lives for an extremely long time. 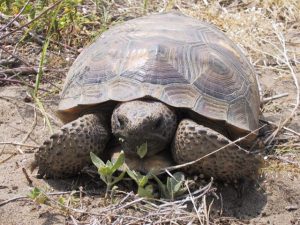 These creatures have a large head and a dark brown body. The color of its skin may vary from light to gray. These are less than a foot in size. A Gopher Tortoise baby is yellowish in appearance. It has long forelimbs that are used for digging burrows. Its hind legs are short and yellowish in color.

An average-sized animal of this species weighs about 29 lbs.

A tortoise of this species lives for about 60 years.

This cold-blooded creature belongs to the genus Gopherus. It is a member of the family Testudinidae and is a part of the species G. polyphemus.

According to a recent study, there are about 1,674,000 animals of this type existing in the wild. They generally get water from what they eat. However, they drink only standing water during extreme drought.

These are herbivores and feed on about 300 plant species. However, the diet for this animal primarily comprises of grasses, peas, pines, beech, spurge and flowers like daisies and asters. They also eat mushrooms and fruits like blackberries and gopher apple. They have also been known to feed on carrion and feces.

For Gopher Tortoise mating season usually begins in April and ends in June. The gestation period is between 80 and 100 days. Female tortoises lay the eggs out in the open. Because of this about 94% eggs are destroyed by predators and adverse weather conditions. The ones that survive for one year or more hatch into tortoises. 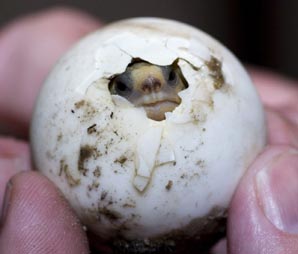 A tortoise of this species reaches reproductive maturity when it is approximately 20 years old. On an average, females of this type lay six eggs. However, the number of eggs depends on the body size of the female. A female Gopher can produce anywhere from three to fourteen eggs. A Gopher annually lays one set of eggs every year. The eggs require about 100 days for incubation.

This species of tortoise is reputed for its capability to dig deep burrows. It spends most part of the day digging long holes that are up to 48 feet (14.5 meters) long and 9.8 feet (3 meters) deep. Such long burrows help Gopher tortoises stay protected from predators, fire, high summer heat and extreme cold. Many other small creatures like frogs, mice and snakes can live in these burrows and protect themselves from harm.

Gopher Tortoise lives in places like Florida, Alabama, South Carolina, East Louisiana, Mississippi and South Georgia. However, it is most commonly found in all the 67 counties of the US state of Florida.

For Gopher Tortoise endangered species is the most appropriate term. The existence of this creature is threatened. The Fish and Wildlife Conservation Commission of Florida has included this tortoise in the list of Species of Special Concern. It is protected federally as an endangered species in all regions where it is found, except Florida.

This creature looks like any other tortoise. But it has stronger and stouter limbs with fat, wide claws that aid it in digging. It has small scales that protect its forelimbs. The protective shell that is found on all turtles and tortoises is also present in Gopher Tortoise. The shell is an extension of its skeleton and gives it complete protection. When the tortoise senses a threat, it can pull its head and limbs into the shell. Very few creatures other than human beings can hurt the tortoise at this time.

Male tortoises of this type can be distinguished from the female ones by their bottom shell and a frontal projection of the shell that can be found under the skin. Female tortoises have a completely flat lower shell surface.

This creature has some outstanding characteristics. The most fascinating of these involve its egg sex-determination characteristics that are temperature-dependant. The eggs, when first laid by this creature, are neither female nor male. The temperatures where the eggs are incubating actually determine the sex of the tortoise to be born. If the temperature is below 30 ° C males will be hatched whereas temperatures above it will produce females.

The creature can usually be found in sand dunes, pine flatwoods and scrubs. The best habitat for this living being is sandy soil. Such types of soil help this tortoise dig deep nests and burrows.

These can also live in man-made environments like fields, roadsides and pastures.

This tortoise requires a sunny environment for survival. It loves places that get a lot of sunlight throughout the day. It also needs places that have small, consumable plants.

Normally, any large animal can be a predator of this tortoise. Dogs, raccoons and birds are the most common predators of this creature. Humans can be a threat to it. Many aboriginal tribes hunt and eat tortoises. Armadillos and alligators are also found to devour eggs of these creatures.

Are you curious about the appearance of this creature? Here are some Gopher Tortoise photos that you may find useful. Check out these Gopher Tortoise images to know how this particular species look like. 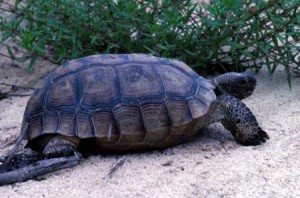 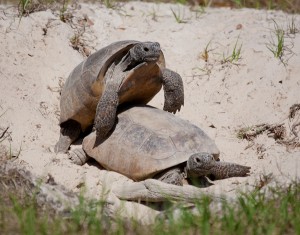