Radiated Tortoise, a species belonging to the family of “Testudinidae,” is a native of southern Madagascar. It is recognized by its distinct carapace which is covered by yellow lines emanating from the center of the dark plates on the shell. The lines make a star-like pattern. It is considered to be one of the finest looking tortoises in the world.

Radiated tortoises have the standard tortoise-like body shape. They have a high dome-shaped carapace with a blunt head and large, mammoth-like feet. The head, legs and feet are yellow in color. The upper portion of the head has a black patch which is of variable size.

The carapace is designed with bright yellow lines which emerge from the center of the dark plates in the shell. These intricate lines form a star-like pattern and shine brightly under the influence of light. The carapace scutes are very smooth. The dark color of the shell fades as individual tortoise ages. This makes the shell of the older tortoises lighter in color. 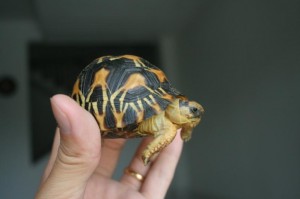 The young ones are off-white and black as they hatch but soon develop the striking coloration that is found in adults. The adults can grow up to a length of 16 inches and weigh almost 35 pounds.

Radiated tortoises have some very interesting behavior patterns. Read on to find out what they are:

Radiated tortoises are herbivores and mostly feed on fruits, vegetables, grasses and herbs. Their diet, however, is somewhat different in captivity rather than when they are in the wild.

These tortoises are mostly found in southern Madagascar. They have also been introduced to places such as Mauritius and Réunion.

The Radiated Tortoises mostly like to reside in dry forests and especially in woodlands and Diderae (thorn) forests of southern Madagascar.

In the wild, they are often attacked by predators like various snakes and birds of prey. However, humans pose as the biggest threat to their survival both through exploitation and habitat destruction.

While attacked by predators, they cannot escape quickly. However, when they are threatened they tend to make a high-pitched noise that scare off their predators. This adaptation helps them to survive from predators.

Male radiated tortoises start mating after they have reached half the size of an adult tortoise, which is almost 12 inches. The females need to be somewhat longer than the males. The males may fight among themselves for the females and roll each other on their backs and ram each other using their shells. 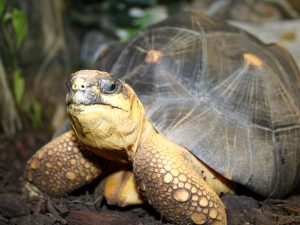 After mating, the female tortoise will dig a hole 6 to 8 inches deep to form a nest and lay anywhere around 3 to 12 eggs. Incubation period for the eggs may last from 145 to 231 days. The hatchlings measure between 3 to 4 cm in length and they develop their carapace quickly after hatching.

Radiated tortoises normally live for around 40 to 50 years but specimens living for more than 100 years have also been found.

The Radiated tortoises are considered to be one of the most beautiful tortoises in the world. It is also very rare. Due to such reasons, these tortoises are highly valued as pets. They are costly and hard to get. Since it is considered to be an endangered species, it is now the most protected tortoise in the world. There is an aura of mystery associated with this animal since it comes from Madagascar, an island of strange and exotic birds and animal species. Due to the mystique associated with this animal, people having these tortoises as pets consider themselves lucky to have a great addition to their collection of pets.

A small box should be located at the corner of the housing area to provide the tortoise with a cool retreating spot.

Lighting Requirements: A 100 Watts lamp should be provided in the tanking environment for aiding artificial basking. The light should be positioned in such a way so as to provide a basking area having a temperature of 32 degree Celsius.

A full spectrum fluorescent light for generating UVB should be provided in the housing area. A UVB source is important for the syntheses of Vitamin D3. Vitamin D3 helps in calcium metabolism.

A mercury vapor bulb can fulfill both the UVB and heat requirements.

Outdoor Housing: An outdoor habitat for a radiated tortoise has got many advantages over an indoor habitat. Outdoor accommodations are especially useful during summer. Some portions of the outdoor home should have a lot of vegetation to provide for a cool relaxing area. These tortoises are also fond of wallowing in muddy areas. Doghouses or hutches can be used as a home for these tortoises. In areas with cold nights, the temperature of the home should be maintained below 16 degrees Celsius with the help of a thermostatic ceramic heater.

Radiated tortoises are listed as critically endangered by IUCN. Loss of habitat has been the primary reason for their decreased numbers. They have also been overexploited as pets and killed for food. These tortoises are listed in Appendix I of CITES. They are now highly protected and any import or export of these tortoises is strictly prohibited under most conditions. These laws are however largely ignored in Madagascar due to poor economic situations. Although there are no such estimations of the number of tortoises in the wild, their numbers are decreasing at a rapid rate. To curb this tendency, captive breeding programs have been adopted which is now showing some signs of improving their numbers.

Here are some images showing radiated tortoises in all their attractive glory. 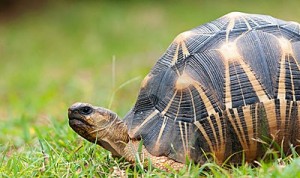 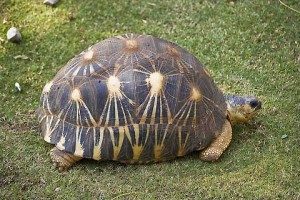 The radiated tortoises form an essential part of the ecosystem in Madagascar. They are known for their beautiful looks and are often termed as the most beautiful species of tortoises in the world. It is thus important for us to save and cherish this wonder of nature.