The red-footed tortoise, also known as red-leg, red-foot, red-legged, and savannah tortoise, is a mid-sized reptile found in Central and South America. 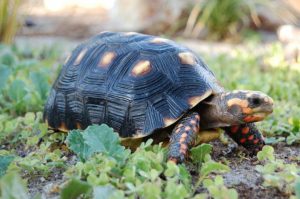 Size: Red-footed tortoises have an average length of 12-14 in (30-35 cm); individuals measuring up to 18 in (45 cm) are commonly found while there have been occasional discoveries of 20 in (50 cm) specimens. Males are larger than females.

Weight: Average weight of these reptiles is around 11 lbs (5 kg).

Color: They have a dark-brown to blackish-brown carapace with structures on them known as scutes. Each scute has a pale color near the center called areolae while the outer portions of the scutes are golden-brown with the edges being dark-brown. The plastron, which is the lower shell, tends to range from a pale to a dark-yellow. The scales on the tail and limbs range from yellow to a reddish-orange while those on the upper surface of the head are brightly colored with dark margins. 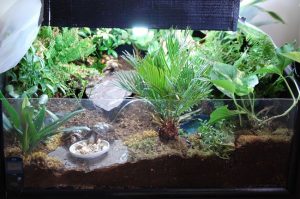 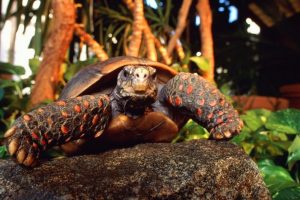 They have an omnivorous feeding habit. It eats fruits during the wet season and shifts its diet to flowers during the dry season. They also consume fungi, soil, foliage, pebbles, sand, and carrion.

They mate around the wet season from the months of June to September. Males start making sounds to drive off competition and attract mates. The sounds made during this period resemble the sounds of chickens. Males engage in head-bobbing to intimidate their opponents before starting to wrestle to win over mates, and competitions are won when one individual flips the other onto their back. Females make several nesting sites and lays between 2 and 15 eggs in each location. These eggs are incubated for 117-158 days. 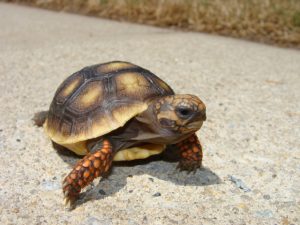 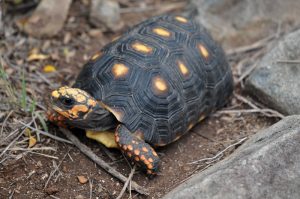 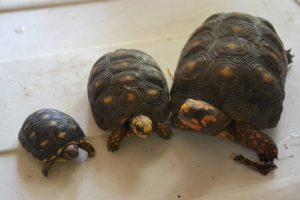 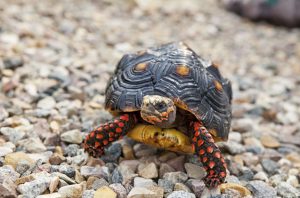 Juveniles, hatchlings, and eggs are fall prey to many predators. Adults are usually protected by their shell but are preyed upon by jaguars, whose jaws have enough strength to break the shell open. 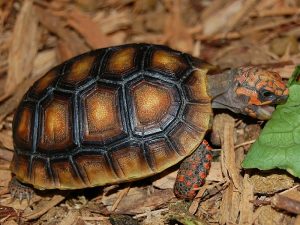 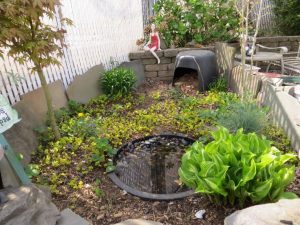 The IUCN currently lists the red-footed tortoise under the ‘Vulnerable’ category. 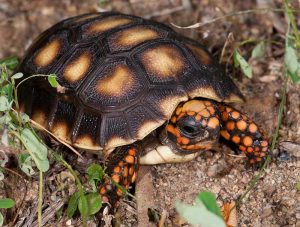 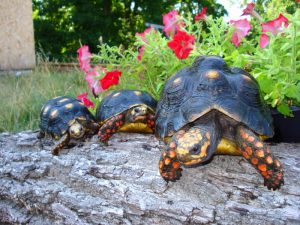