The coconut octopus, alternatively known as the veined octopus, is an intelligent cephalopod widespread in the Indo-Pacific tropical waters. It has derived the name from its tendency of carrying coconut or seashells as its armor. This medium sized octopus is not poisonous. 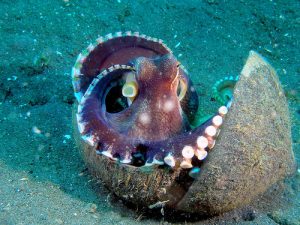 Color: Coconut octopuses have elegant physical characteristics marked by a brown colored body with vein-like lines paired with a yellow siphon.  White and blue colored suckers create a perfect contrast to the dark colors observed on the edge of the arms. A trapezoidal shape area right under the eyes exhibits white shade.

Coconut octopuses are commonly found throughout the tropical Pacific and the Indian Ocean, from Australia to South Africa, Southern Japan, New Guinea, Indonesia, and India. 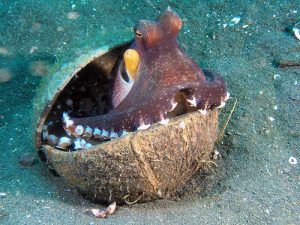 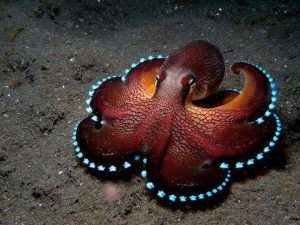 It is a benthic creature meaning it stays at a depth of around 600 ft (183 m) in a muddy and sandy surface.

These carnivores eat fish, shrimp, and crustaceans which they gather from the mud holes. 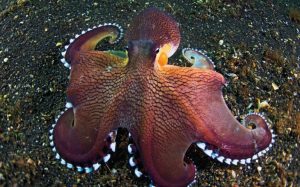 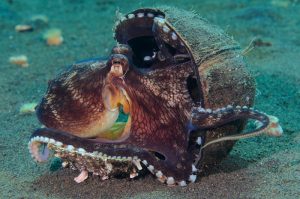 When the water gets warm, the male octopus passes the spermatophore with a hectocotylus (a tentacle) into the female’s mantle area. It is quite a risky affair for the males as females are prone to eat their counterparts during mating. So, males disguise themselves as females in order to have offspring.

After a period of 11 months, a female coconut octopus lays up to 100,000 eggs, each sizing less than 0.24 in (6 mm). She keeps the eggs in a safe corner or crevice and protects them until they hatch.

Offspring exist in planktonic form initially. After hatching, they are usually carried out by the sea current and feed on copepods (aquatic insects) during this period. At the age of 1-2 years, they attain sexual maturity.

These octopuses live for around 3-5 years. 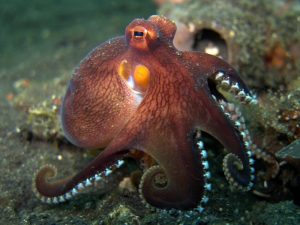 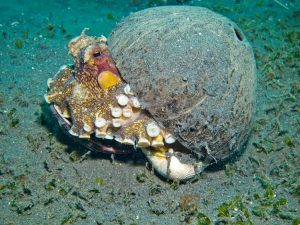 Their conservation status has not been evaluated by the IUCN.