Loggerhead sea turtles are not only one of the most ancient creatures of the earth but are also an amazing species of turtles. Unfortunately today this oceanic turtle comes under the list of threatened species due to commercial exploitation by humans, pollution, habitat loss and many such factors.

The loggerhead sea turtle belongs to the family of Cheloniidae.

Size: An adult loggerhead is approximately 2.5 – 3.5 feet in carapace length.

Weight: On reaching the adult size, this creature weighs around 155 – 375 pounds.

Carapace: The adult turtle has a reddish-brown carapace or shell. The carapace is more or less heart shaped. The carapace of a loggerhead turtle is extremely hard and bony without any ridges; however it has large, rough scutes that partly overlap each other.

The under portions (also called plastron) is generally yellowish brown in color.

Juveniles have a dark brown carapace.

Flippers: A flipper is the flat, broad limb of aquatic animals that enable them to swim. Loggerhead sea turtles have flippers that are short and thick. There are 2 claws in the front flippers; while the rear flippers may have 2-3 claws.

These species mostly inhabit open seas and shallow coastal waters of the great oceans of the world. They can travel over hundreds of miles out to sea in order to feed. However it is rare to spot these turtles ashore except for the females who occasionally visit water shores to nest and deposit eggs. 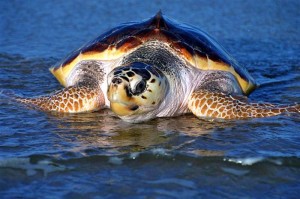 Research and studies reveal a specific pattern in preference of habitat especially in the northwestern Atlantic Ocean; the juvenile loggerheads tend to inhabit the shallow estuarine with very little access to the ocean waters. This is completely contradictory for the non-nesting adults that are mostly found in the sea waters.

In the Atlantic Ocean, loggerheads inhabit the southeastern coast of North America and the Gulf of Mexico. Their concentration becomes much more limited along the European and African coastlines. Florida happens to be the biggest nesting site for the female loggerheads.

The coastlines of Africa, the Arabian Peninsula and the Arabian Sea are frequented by these sea turtles in the Indian Ocean. Oman is the second most popular nesting site. Western Australia is also serves to be a noted nesting site for these turtles.

Loggerhead sea turtles inhabit the temperate and tropical regions of the Pacific. Popular nesting sites include Japan and Eastern Australia. Yakushima Island is by far the biggest nesting site with a record of being visited by almost 40% of loggerheads every year.

The Mediterranean Sea is known to be home to the juvenile loggerhead turtles that migrate all the way from the Atlantic. Adults visit this region during spring and summer. A famous nesting site along the Mediterranean is Greece.

These creatures have been gifted with powerful jaws that make it convenient for them to consume hard shelled prey.

Loggerhead sea turtles basically feed on jellyfish, crabs, shrimp and even fish. However it is not unusual for their diet to include seaweed and sargassum occasionally.

Loggerhead sea turtles make one of the most interesting studies when it comes to their reproduction pattern. The fact that the loggerheads are ready to mate only by the age of 17 to 35 is also quite startling! It is noteworthy that once the mating begins, the process can last up to a whole of 6 weeks. It is equally amazing how the mating process occurs along the migration routes in the sea rather than someplace in proximity to the nesting beach. Ovulation in the loggerhead sea turtles is known to be induced by mating. The eggs that are ovulated by the female are fertilized by the male turtle. Such a kind of ovulation that is caused by mating is indeed a very unique and rare phenomenon outside of mammals.

The females choose their mates; competition between the males for a particular female often ends with the winner getting to be the mating partner.

Male courtship usually includes acts of biting, nuzzling along with head and flipper movements. The male tries to mount the female prior to the actual act of mating. The final mating partner has every chance of being attacked by other courting males during the act of mating. Sometimes the attack can be so severe that it can lead to injuries in his flippers and tail.

The mating season along the Mediterranean starts from late March to early June. June and July is note to be the peak nesting months for the loggerhead sea turtles.

Each clutch may include an average of 4 eggs. The nesting females are not able to produce any eggs for almost 2-3 years after their first batch. The female chooses a nesting site that is typically safe and above the high-tide line. The incubation period lasts for around 80 days. The hatchling’s journey from its nest to the ocean is very risky owing to the fear of predators and the natural evaporation process that occurs wherein they end up loosing up to 20% of their body mass; these innocent creatures navigate with the help of the reflection of the moon and star light off the water surface, towards the direction of the brighter horizon. 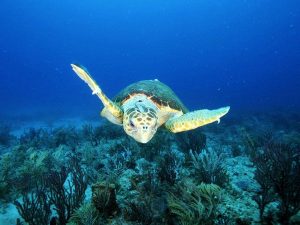 The color of the newborns or hatchlings may vary from light brown to lack. Once in the ocean hatchlings dwell in a pelagic environment till the time they become juveniles.

Most of the adaptations of the loggerheads allow these creatures to adjust to an environment at the sea.

One of the most distinct adaptations of the loggerhead sea turtle is the modification of its forelimbs into flippers that enable it to swim.

It is noteworthy how the necks and limbs of sea turtles are non retractile; they are not capable of being drawn back. Retractile limbs would act a huge hindrance in rapid swimming.

Moreover, the sea turtles also have this special adaptation process wherein they extract water from the food they intake and by metabolizing sea water; as such they can survive in sea water without the requirement of a freshwater or freshwater source.

The loggerheads are deep water divers. As such the lungs of these turtles are designed in such a manner that allows speedy exchange of oxygen and forbids gases to be trapped in these organs, during deep dives. Oxygen gets sufficiently supplied to the tissues of the turtle’s body in spite of the pressure experienced during the act of diving. This body mechanism also allows the turtle to rest or sleep under water for a stretch of several hours.

The loggerhead sea turtle have to live with the fear of a world full of predators. These creatures and their eggs suffer huge threats from humans. Apart from this there also exists a long list of other egg and nestling predators like  ants, oligochaete worms, parasitoid wasp larvae, rats, opossums, armadillos, flesh flies, crabs, skunks, cats, hogs, canids, raccoons, snakes, crows and gulls.

The period of migration from their nest to the sea is one of the prime time when the poor hatchlings fall victims to dipteran larvae, snakes, lizards, crabs, toads, birds and mammals. Life at the ocean awaits even more dangerous predators including sharks, monk seals and killer whales!

The red fox happens to be another prime predator of loggerhead sea turtles. Introduction of these animals in Australia during the 19th century had lead to such a massive impact on the loggerheads population that schemes were laid to destroy the red foxes.

Logger head sea turtles have an average lifespan of 30 years. However some can make it up to 50 years and over.

Let u take a look at some really interesting facts about the loggerhead sea turtle.

Why is the Loggerhead Sea Turtle Endangered?

It is indeed a matter of great concern and a shame up on humanity that the beautiful species of loggerhead sea turtles are now classified as endangered. Among the top most threats that are responsible for the endangerment of these marine reptiles are habitat loss, entanglement and commercial consumption of their meat and eggs.

The scenario of these sea turtles drowning as a consequence of getting caught in fishing gear has now become a common scenario. Moreover coastal developments with artificial lights and houses distract hatchlings away from the ocean. Ocean pollution is another such factor that comes into play; these innocent turtles often confuse plastic bags with jellyfish and end up consuming it leading to their consequent deaths.

Loggerhead sea turtles are enlisted as endangered species by the International Union for the Conservation of Nature. Any kind of international trade involving this species will be considered illegal as stated under Appendix I of the Convention on International Trade in Endangered Species.

Take a look at these amazing pictures of the endangered Loggerhead sea turtle and create awareness about these beautiful sea creatures that deserve to be protected. 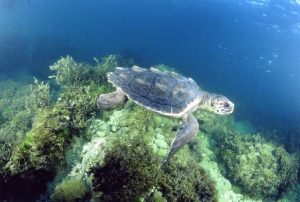 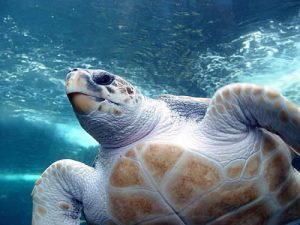