Anemone fish or clownfish belongs to the subfamily Amphiprioninae in the family Pomacentridae. All of them form symbiotic mutualisms with sea anemones. They prefer living in nestled among the tentacles of stinging anemones. These fishes have a special layer of mucus that keeps these anemones from stinging them. They are also known as Clown fishes.

Anemone fish live in pairs and are noted for their association with large sea anemones. They are mainly ornamental marine animals and are also kept in aquariums.

These are beautiful looking species of fishes.

Size: They grow to nearly 4 inches. The largest one can reach a length of 7 inches.

Shape: The body shape of this fish is perch like – oval and laterally compressed with a lateral line.

Color: These fishes are yellow, orange, reddish or blackish in color. Some of them have snow white bar or patches.

Fins: They have rounded caudal fins with black tips.

Mouth:  Their mouth is wide enough. Very easily they capture prey with its deadly stinging tentacles. 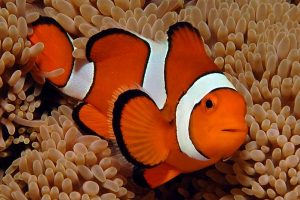 Anemone fish prefer warm water. They live at the bottom of the shallow seas in sheltered reefs or in the shallow lagoons (body of shallow sea water separated from the sea). They usually attach themselves to rocks and underwater structures, though some of them burrow into mud or sand. Mainly they are seen residing on coastal seaward reefs as they feel safe there. They are found in sheltered lagoons at a depth of 1-14m.

Clown fishes are noted for their unique behavioral characteristics.

They are omnivorous. They mainly feed on zooplankton and also they prefer eating bottom dwelling invertebrates. They love eating shellfish and some even like having sea urchins, sea cucumbers, mollusk, crustacea and sea stars. Few of them prey on small fishes or shrimps with pincers on the top of their bodies. Clownfish also eats dead anemone tentacles. They only eat things that they can swallow whole. Algae contribute for 20-25% of their diet.

The orange clown anemone fish are often attacked by sharks, stingrays, and by the other larger fishes. The anemone’s stings keep the fish predators at bay.

They usually have many interesting adaptive features to know about. 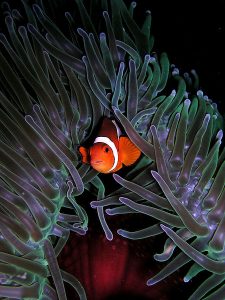 Their mating season is not known.

Clown fishes are sequential hermaphrodites. They develop into male first and when they mature, they become female. They reproduce through external fertilization. If somehow the female one is removed from the group, the most dominant male will become female. They can lay eggs on any flat surface and the male parent guards the eggs until they hatch about 5 to 10 days later, after the dusk. 100-1000 eggs are laid in spawning pass depending on the age of the female.

They have bipartite life cycle. Eggs and sperms are held in pouches and then the spawn is released into the sea. The life cycle has scattering pelagic larval stage and it takes 2-3 months for the fishes to become matured enough to swim alone.

They have a life span of 8 years and those living in protected environment can live up to 12 years.

Clown fishes or anemonefishes are often displayed in the salt water aquariums because of their high survival rate. They are raised in aquaculture facilities that decrease the pressure on wild populations. These were the first species of saltwater fish to be tank raised.

Water Temperature: The suitable water temperature for this fish is 75-80 degree F.

Aquarium Size: Make sure that the size of the aquarium is large enough and should have plenty of rocks for the fishes to play.

Know more about this clownfish

Here are a few images of clownfish 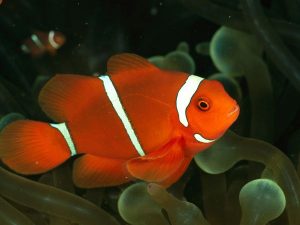 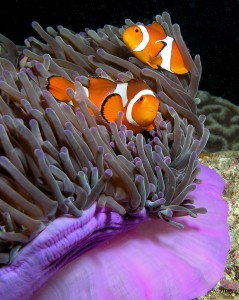