Black Marlin is a migratory fish normally found living in the tropical and subtropical waters of the Indo-Pacific region. Migrating Black Marlins are found in Atlantic Ocean. These fishes are considered one of the fastest swimmers on earth, often speeding up to 80 mph (130 km/h).

Color: Their colors vary from blackish to dark blue. These species have a dark blue dorsal (upper) side. The belly region tends to be silvery-white with strokes of faint blue vertical stripes on the lower sides. The back side of a Black Marlin fish is slate blue. When excited, it is found to have light blue stripes.

Body: It is a large-sized bony fish. They have a sword-like long snout. Their body shape resembles to that of a space rocket. 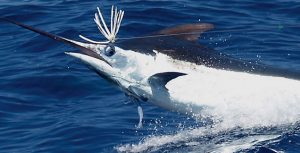 Black Marlins are scattered throughout tropical and subtropical waters of the Pacific and Indian Oceans. The species is often found to roam independently in Atlantic Ocean. The ones that find their way into the Atlantic take the route through the Cape of Good Hope. These fishes are found in most Australian sea waters. They have been found in temperate waters.

Black Marlins are migratory in nature. Usually they tend to remain in shallow waters. They stay near the sea shore. Since this species belongs to the indo-pacific region it is found near islands and coral reefs. These fishes never swim below 30m depth. They stick to a range of ocean depth from 0 to 915m. Due to their migratory nature at times they enter temperate waters.

These are carnivorous fishes. They mainly feed on various types of sea animals and smaller fishes like dolphinfish, squid, cuttlefish, octopuses, mackerels, trevallies and swordfish. Black Marlins prefer feeding on small tunas when the latter are in plenty.

These Marlins perform external fertilization in breeding. The process of spawning takes place in water temperatures of 27 to 28 degree Celsius. A pregnant female has the ability to carry 40 million eggs. 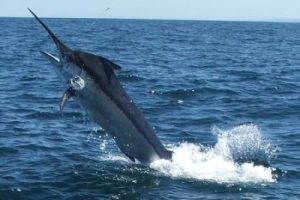 Study the behavioral patterns of this huge fish.

There is a shortage of data in IUCN regarding the conservation status of Black Marlin fish.

Here are some images of Black Marlin 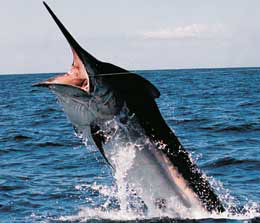 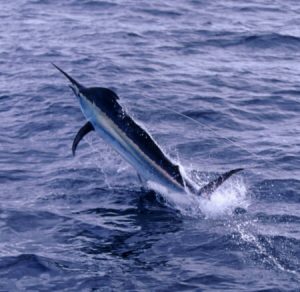