The Blue Shark is a species of shark found almost everywhere in the world and is the most widely distributed shark species. It is one of the most easily recognizable sharks because of their distinct blue coloration – a combination of deep indigo and vibrant blue. The shark species plays an important role in ocean ecosystems.

Body Anatomy/Skin Coloration: Blue sharks are literally blue in color. While the dorsal (back) side is a distinct deep blue, the ventral part (underbelly) is white. Both the sides are bright blue.

Eyes: Large round eyes that seem to be completely black from a distance. 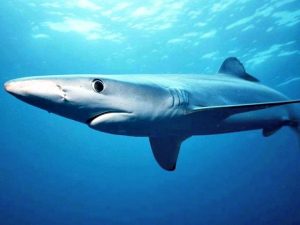 Nose: Nostrils are situated just in front of the eyes, under the snout.

Teeth/Dentition: The upper and the lower jaws have rows of very sharp teeth, adapted to tear their prey quickly.

The lifespan of this fish is up to 20 years in the wild, and around 8 in captivity.

The blue sharks are found in the coastal waters of all the continents except Antarctica. It dwells temperate, tropical and subtropical waters up to 350 meters deep. It lives near the coasts except those of Antarctica. Currently, no regional subspecies of this shark has been classified.

Habitat: Where do Blue Sharks live

The species inhabits in the tropical, subtropical and temperate waters up to 350 meters deep. They prefer water between 7° and 16°C. 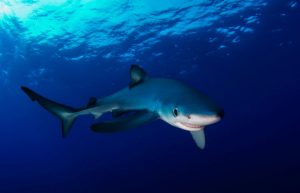 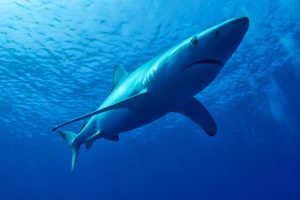 Blue sharks are nomadic animals that can migrate over long distances in search of food or for mating. In general, these sharks are lethargic and slow swimmers, and would only increase their moving speed when they get stimulated by other factors including views of other underwater animals that can be their prey. In such cases, the blue shark can prove to be one of the fastest-moving fish. They communicate with each other through movement gestures or body language. No other data about communication is available.

They have also been reported to perform acrobatics out of the water surface while chasing prey. The sharks are social in nature and move in small to medium size schools. There is also clear evidence of hierarchy in a group that is usually determined by size, sex, etc. However, all-male or all-female groups have also been seen. They are curious and fancy approaching the shores and are often seen by divers and boats.

Diet: What Do Blue Sharks Eat 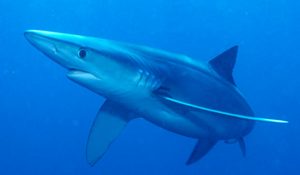 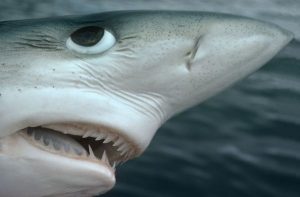 These creatures are polygamous and reproduce through viviparity after they attain the age of sexual maturity when they are around 5 to 6 years old. Before mating, the male blue shark would induce a bite between the first and the second dorsal fin of the female. If the latter accepts the courtship, the former would insert its clasper inside the oviduct of the female. This act delivers the sperm for the fertilization of the eggs. When the mating is done, both sharks part ways and never join again.

The female migrates northward for delivering the offspring, though it is not yet known how frequently the females give birth, or how long the sperm is stored inside the oviduct. The gestation period of the female is 9 to 12 months, while the young ones are hatched inside their mother’s body, after which the female gives birth to live young. A single litter can contain anything between 4 and 130 pups, with the average range being 25 to 50.

The baby blue sharks do not get any parental care after they are born. The mother shark leaves the juveniles soon after they are released from its body. Interestingly, these sharks have one of the fastest rates of growth among all shark species. A baby shark can keep growing up to 30 cm every year until they eventually reach the age of maturity.

Usually, the young ones are frequently eaten by larger shark species that share a common range including the great white and the tiger sharks. However, both juveniles and adults are sometimes killed by seals and sea lions that eat just their liver and stomach.

The adult blue sharks are often infested by certain parasites (like tapeworms), which usually come from other infected prey like opah, longnose lancetfish, etc. 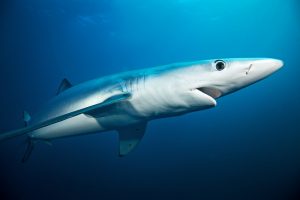 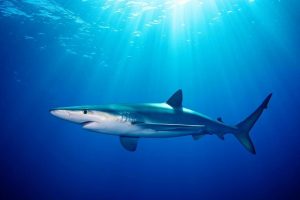 Owing to poaching and illegal fishing, the blue shark population is gradually going down. It is estimated that 10 to 20 million of them are killed each year for consumption and other purposes. The IUCN 3.1 has categorized this species under the ‘NT’ (Near Threatened) species list.