The Bonnethead Shark (also known as the Shovelhead shark) is a species of tropical shark, and is the smallest member of the hammerhead genus (Sphyrna). They are considered as a delicacy in many parts of the world and are widely popular for their ‘tasty’ flesh. Though their population is static, they are extensively hunted during sea fishing. Despite all this, not enough studies have yet been done on this species. They are known in several other names, including bonnet shark, bonnet hammerhead shark, and bonnetnose shark, and are often displayed in aquaria.

Weight: The heaviest specimens can weigh up to 24 pounds (approx. 11 kg).

Body Color: The dorsal side is evenly greyish-brown, while the ventral side has a lighter coloration.

Fins: Compared to other hammerhead shark species, the pectoral fins of the bonnetheads are larger and more developed in proportion to their body size. This helps them escape from their predators more effectively.

Teeth: The dentition of the shark reflects its diet type. The teeth are not serrated, showing gradual differences in shape along the length of their jaws. The set of teeth at the front are symmetrical with a sharp central cusp. The back teeth are in the shape of flattened blades to help them crush the shells of the prey (mostly crustaceans). 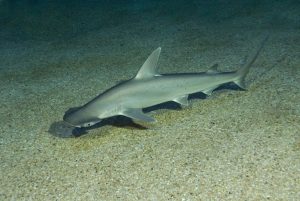 Sexual Dimorphism: The male and the female have distinct physical differences. While the female bonnethead has a rounded, broad head, the male possesses a distinct bulge on the top of its head (a unique feature of the hammerhead species).

In the wild, the longevity of the bonnetheads is about 12 years.

The shark occurs off the American coast, ranging from New England to the Gulf of Mexico and Brazil, as also, from southern California to Ecuador.

Bonnethead sharks are typically found in the shallow waters throughout their range. They prefer environments with warmer waters [over 70° F (21° C)] of the estuaries, shallow bays over seagrass, mud, and sandy bottoms, as well as the coral reefs along the coastline.

Currently, no subspecies of the bonnethead shark has been described by the biologists. 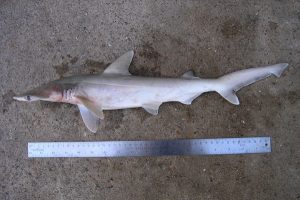 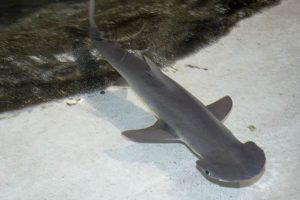 Very little is known about the different behaviors of bonnethead sharks. These are active fish that swim in small groups in the tropical waters, with each group containing 5 to 15 members. However, schools of up to a few hundred, or even thousands have been seen.

Following the temperature of the waters, these sharks keep constantly moving in order to maintain the process of respiration. The shark spends the hours of nighttime on shallow grass flats, foraging for invertebrates to prey. However, during the day, they move deeper into the sea water.

They are neither aggressive or dangerous to humans, nor do they bite. Owing to their size and shy nature, the bonnethead sharks are considered practically harmless to humans, with only one recorded unprovoked attack attributed to this shark species.

Being omnivorous, they consume both animal and plant matters. However, their diet list is usually dominated by marine crustaceans, mostly the blue crabs. They would also feast upon mollusks, shrimps, and different species of small fishes. Specimens of seagrasses have also been found in their stomach contents. 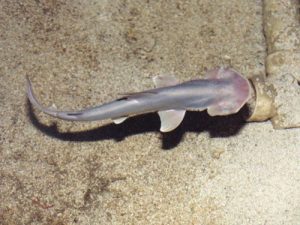 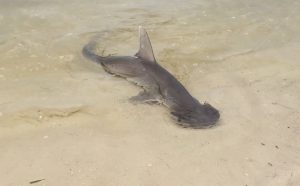 As mentioned, nothing much has been researched about the sexual behavior of these creatures. The bonnetheads reproduce by mating sexually, and they are viviparous – producing living young (not eggs). Each litter produces around 8-12 pups, usually.

The gestation period of these sharks is one of the shortest among all shark species, lasting approximately 4.5 to 5 months. The age of maturity of the pups is attained when the juveniles are approximately 75 cm (30 in) in length.

The baby sharks are born in around late summer to early fall. At birth, the young sharks measure 30-32 cm (12-13 in), with an approximate weight of about 172 g. The survival of the baby bonnetheads, especially the newborn ones, primarily depends on size-selective predation by other marine creatures.

Larger sharks, like the tiger sharks and the lemon shark that share a common habitat, are potential predators of the bonnethead species.

Owing to their high population numbers, this species has been categorized as ‘LC’ (Least Concern) by the IUCN 3.1. 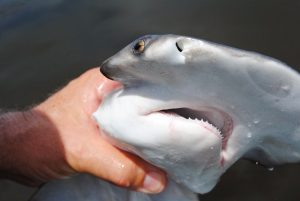 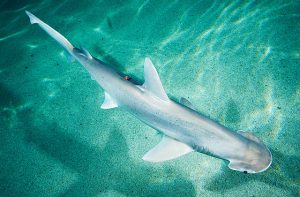