Spotted Eagle Ray is a species of cartilaginous fish belonging to the Myliobatidae or Eagle Ray family. They are one of the most beautiful Ray species in the world. Their interesting behavior patterns and peaceful nature separates them from many other species of this family. They have various common names such as white-spotted eagle ray, bonnet ray, duckbill ray, bonnet skate and spotted duck-billed ray.

They are counted among the most beautiful Ray species with their colorful and attractive appearance:

Size: Adult Rays of this species can grow up to 16 feet (5 meters) in length including their long tail. Young Spotted Eagle Rays measure between 17 cm and 35 cm in width at the time of birth.

Wingspan: They generally have a 9 feet wide wingspan. The largest Spotted Eagle Ray has been recorded to have a wingspan of 10 feet (3 meters).

Weight: This species of fishes generally weigh between 180 kg and 225 kg. The largest Ray of this species weighs around 230 kg (507 pounds). 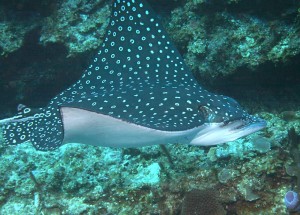 Color: The color of their dorsal side ranges from black to dark blue or grey. This side is covered with white, pearly and pale yellow dots and rings. Some of the larger rings have a black center. The underbelly or ventral side is off-white. Their tails have a white base.

Body: Like other Rays from the Myliobatidae family, this species has a flat disk-shaped body. They have a pair of pelvic fin just before the tail.

Snout: Their broad and flat snouts resemble the bill of a duck.

Tail: They have a long whip-like tail with 2 to 6 venomous, barbed stingers attached to its base.

Mouth: These fish have rows of flat broad teeth combining to form a kind of plate in both their upper and lower jaws. They have 6 to 7 papillae situated at the roof and 6 more situated on the floor of their mouth.

This species is found in the tropical waters. Their distribution range includes the Gulf of Mexico, Atlantic Africa, Hawaii, Oceania, the Indian Ocean as well as the coasts of both North and South America. They can also be found in the marine waters of northern Japan, Australia and the Galapagos Islands.

These Rays inhabit shallow coastal waters near bays and coral reefs. They frequent at 80 meters depth of marine water and sometimes also near the ocean surface. Their preferable water temperature ranges between 75 °F and 81 °F (24 °C and 27 °C).

This species of fishes have some very interesting behavior patterns: 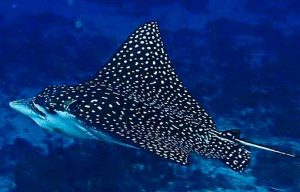 Various large shark species including the bull shark, tiger shark, silver tip shark and the great hammerhead shark are known to feed on this species of ray. The sharks sometimes follow female Spotted Eagle Rays to feed on their newborn offspring.

They have many adaptative features that assist them to avoid being preyed on and feed on hard shelled preys:

This ray species is ovoviviparous, meaning their eggs develop and hatch inside the body of the female rays. The gestation period of this species lasts for 1 year. A female gives birth to 2 to 4 young Rays during each reproductive season. They attain reproductive maturity at 4 to 6 years of age.

The exact lifespan of this specie is unknown. They are thought to have a lifespan of 15 to 20 years.

Here are some interesting facts about this amazing Ray species:

This Ray species is included in the “Near Threatened” category by the IUCN. They are often captured for commercial purposes to be displayed in public aquariums.It has been given various protections in many countries to help the species survive.

Here are some images of this gorgeous ray species. 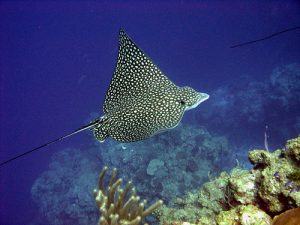 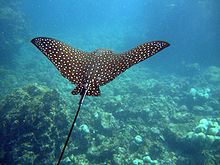