The Moorish idol is a small marine fish species, the representative of Zanclidae family. Inhabitant of tropical and subtropical reefs and lagoons, this fish is notable for its broad allocation throughout the region of Indo-Pacific. Many of the butterfly fishes resemble Moorish idol. This species got its name from the Moors of Africa, who supposedly believed the fish to be bestow of happiness . They are the popular aquarium fish but are also known for having short aquarium lifespan.

These adorable aquarium fishes looks like the description given below.

Size: The fish can grow to the length of 9 inches.

Color: Moorish idols stand out in contrasting bands of black, white and yellow which make them attractive to the aquarium keepers.

Weight: These species weigh from ½ lbs to 3 lbs.

Fins: They have long, white and sickle shaped dorsal fin.

Mouth: Moorish idols have small terminal mouths at the end of the long, tubular snouts and also they have long bristle like teeth line.

Shape: Their shape is inimitable. They usually have a circular body that makes them look different from the other fish species. 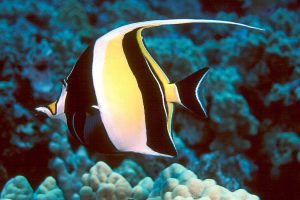 Moorish idols are largely seen in East Africa, Indian Ocean, Ducei islands, Hawaii, Southern Japan, and Micronesia. They are also found in Southern Gulf Of California and Peru. These species are very much indigenous to Indo-Pacific Region.

These species prefer living in tropical and subtropical areas throughout the pacific and indo pacific regions. Though they are found in flat reefs but are also spotted in lagoons as well. Clarity of water does not bother them.

Their behavioral characteristics are quite interesting to observe.

They are omnivorous in nature. They are very picky about their food and that is why they are termed as snobby. They prefer dieting on of small and live foods, such as brine shrimp, vegetable foods, etc. Though they are bold grazers in nature but these species are extremely shy about their eating, especially in the company of other fishes. They eat 2-3 times a day.

Moorish idols adapt themselves very well in the water. 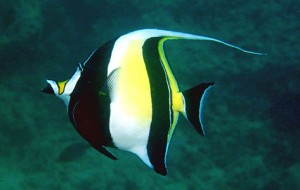 Not much is known about their mating season in wild.

Moorish idols are pelagic spawners. They release their eggs and sperms in water column. Their long larval stage reveals their impressive range. Before becoming free swimming juveniles they reach a length of 7.5 centimeters.

The Moorish idols have an interesting life cycle. They spend much of their time at the ocean surface after hatching from the planktonic egg. When the idols grow large in length, they settle out of the plankton onto the coral reef.

Moorish idol have a lifespan of 2 to 4 years.

Moorish idols are difficult to care for in captivity. Due to their colorful appearance and lively nature these Idols serve as great aquarium fishes.

They usually require large tanks, exceeding some 100 US gallons. Some of them became voracious and destructive in the aquariums if supplied with low level of water. They are peaceful in nature. Their survival rate is quite low and most of these species do not survive for a year.

Modish idols prefer salt water. They survive in strong salt water movement as they are found swimming anywhere from the surface to as deep as 550 feet.

Moorish idol is prone to diseases. They require enough cruising space. They suffer stress and strain that will increase their chances of getting affected by contracting disease or parasitic infections. Avoid using copper medications and if required use quinine based medications.

Below mentioned are few fascinating facts about Moorish idol.

Moorish idols can make great aquarium exhibits and can enhance the beauty of the interior of your space.

Take a look at some of the prominent pictures of the Moorish Idol fish! 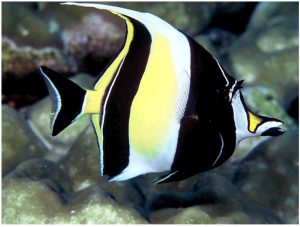 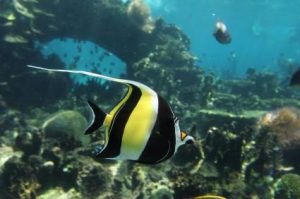