Fire skinks are a type of lizards mainly found in different parts of Africa. Some other names of this species include True Fire Skink, Togo Fire Skink and African Fire Skink. They are quite shy and like to hide in their burrows. These beautiful reptiles are very popular as pets.

These lizards have a shiny and colorful appearance.

Length: They can grow anywhere from 10 inches to 14 inches in length.

Color: These skinks have a golden back with red, black and silver fire-like patterns adorning the sides of their body. Their throats have black and white bars. The male skinks are usually larger and of a brighter color than the females.

Body: Their stocky tubular body is covered in smooth scales that gleam in sunlight.

Tail: The long tail of these creatures is black with white markings. 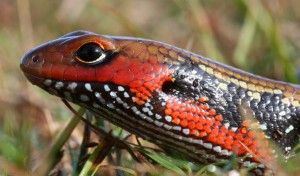 These creatures are mainly found in western regions of Africa. The main area of distribution includes Guinea, Uganda and Angola.

These creatures live in open woodlands, rainforests and edges of open grasslands. They can also be seen near ponds and lakes during skin shedding.

The behavior patterns of these animals are similar to other skinks.

Many animals and birds like raccoons, coatis, snakes, foxes, hawks and herons prey on Fire Skinks.

Their adaptations help them to survive in their environment.

Not much is known about the reproductive habits of these skinks in the wild. But unlike many other skinks, this species is oviparous (animals that lay eggs).

In case of pet skinks, the season of reproduction starts in April and continues through May. The females lay eggs in their tanks. A single clutch may contain 5- 9 eggs which take somewhere between 40- 50 days to hatch when incubated at 85° F temperature.

The average lifespan of these animals is 10- 20 years.

Fire Skinks shed their skin underwater. The molting is done in patches by shedding small pieces of skin one by one.

Here are some interesting facts about these animals:

These skinks are very popular as pets and are fairly easy to take care of.

Housing: A 20-30 gallon tank is ideal for an adult Fire Skink. The baby skinks can live in a 10-20 gallon tank. They need access to water in order to shed skin. These lizards like to dig tunnels and move around in their cage.

Lighting: A 10-12 hours light cycle is ideal for them. Exposure to UV light is good for their health and it helps to increase their appetite and color.

Humidity: They prefer high levels of humidity (70%- 80%). One may also provide them with a “moss box” with damp sphagnum moss.

Temperature: The ideal daytime temperature for these lizards is somewhere between 80 °F and 85 °F. It should be about 5 °F less at night. The temperature of the basking area should be around 90 °F.

Feeding: Pet Fire Skinks eat small insects like crickets, ants and spiders. It is ideal to provide them with calcium and vitamin supplements two to three times a week. The growing skinks should be fed at least once a day, while the adult ones will eat two to four times a week.

Temperament: They have a mild temperament. The female creatures can stay together peacefully. But the males are very territorial and fight among themselves if kept together.

Handling: One should use a pair of gloves when handling these lizards as sometimes they become aggressive and inflict a bite that can be quite painful. They will shed their tail if anyone tries to grab it. The tail will re-grow with time but will lose its beautiful coloration.

The population of Fire Skinks appears to be quite stable. However, like other species of skinks, their population might have been affected by de-forestation.

Here are some pictures of the Fire Skinks. Check out their beautiful coloration. 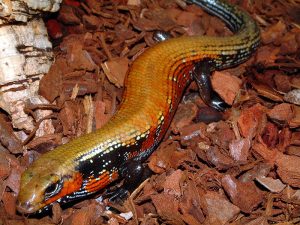 The Fire Skinks are an amazing species of skinks with some interesting habits. They are quite popular as pets for their shy nature and mild temperament.

One response to “Fire Skink”