The Galapagos shark is a type of Requiem shark. These sharks are found worldwide and are mostly seen in wide groups. They are active predators and are also known as the “Grey Reef Whaler”. They are often seen in large groups.  It was in the year 1905 that Galapagos shark was named from the specimens found near the Galapagos Islands. They sometimes approach boats or swim up high to divers, out of a sense of inquisitiveness. The shark has peculiar fusiform shape and is identified by their long dorsal fins. Biomimicry studies on Galapagos said that their skin pattern serves as a natural foul to bacteria. 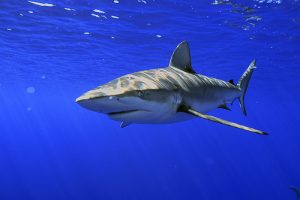 The description given below will let you know how this species of  sharks looks like.

Size : Their maximum length is 3m and during birth they are 50-80 cm in height.

Shape : They have a form resembling to that of fusi and shape of a reef shark. It becomes difficult to differentiate this species from those dusky and large shaped sharks because of their shape.

Color : These sharks are brownish gray in color. They have pale white stripe on the side of their body.

Snout : Their snout is broad and curved.

Fins : These sharks have a pair of dorsal fins. The first fin originates over the posterior. The long pelvic fins are straight and each have a pointed tip.

The Galapagos shark is widely seen in tropical oceanic islands that includes Pacific Ocean, Indian Ocean and Atlantic Ocean. Wide population of this species are  found in continental waters off the Colombia, Baja California, Bermuda and eastern Australia. They are mainly circum-tropical. Recent report says that this species has also been seen in the continental waters off the Colombia, Australia, Guatemela and Baja California. There are about 19 types of sharks found in Hawaii and Galapagos is one of them.

They prefer residing in clear, tropical waters. These sharks penetrate shallow bays in coastal waters and also venture into the surf. They found their niche in the vicinity of pinniped colonies and are caught at a depth of 4,119 ft. They are often seen congregating around sea mounts as well as rocky islets. They are not capable of surviving within small space like aquariums.

Their behavioural pattern is little bit similar to that of the Grey Reef Sharks.

They love eating cephalopods and bony fishes. The larger one prefers varied diet that includes consumption of small sharks like sea lions, marine iguanas and many more. Also they have crustaceans and octopuses. This species of shark also eats squid, mackerel and flying fish. Galapagos are often seen attacking the fur seals and sea lions. 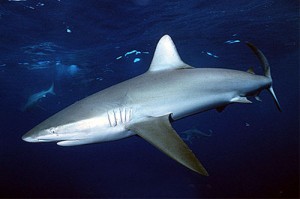 Their biggest predators are Tiger sharks. They are often attacked by the tiger sharks. In case they are threatened by the predators, they arches their back, lowers it pectoral fins and swim in figure eight loops.

Galapagos sharks prefer residing in the Galapagos Islands because of their suitable adaptive features.

Their mating season occurs early in the year (January to March) and gestation is estimated to be about 12 months. Their mating habit is bumpy. Female sharks have scars around their grills, fins and body from biting by the males during mating.

Galapagos shark are ovoviviparous and displays a viviparous (producing living young) mode of reproduction. They don’t reach their reproduction age before 10 years. The gestation period lasts for one year. They give birth to live pups after moving into shallow nursery areas. Their normal litter size is 4 to 16 pups, each babies measuring to 24-31 inches in length.

Lifespan of this species is 24 years.

Galapagos sharks are not at all endangered and are listed as close to susceptible on the IUCN Red list of threatened species. They usually have a slow reproductive rate and there is also heavy fishing pressure across its distribution worldwide.

Here are given few images of Galapagos shark 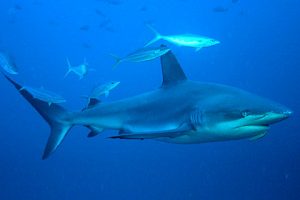 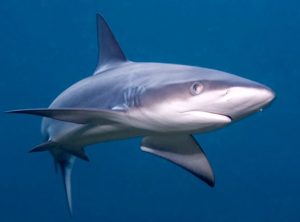