Great barracuda is a slender fish which grows up to six feet long. They are from the genus ‘sphyraena’ which means ‘pike-like’ in Latin. With its elongated body, a large mouth with conical unequal fang-like teeth and powerful jaws, it is also called the ‘Tiger of the sea’. Great barracuda is included in one of the predators on top of the food chain. It is not prized commercially due to its involvement in the ciguatera fish poisoning, however, is widely known as a gaming fish.

The common names of the Great barracuda include barracuda, barra, commerson’s sea pike. Some of the other names by which it is referred as are alu (Carolinian), barkura (Miskito), barracuda bicuda (Portuguese), barrcouda (French), picuda (Spanish), snoek (Dutch), Kupala (Hawaiian), gaviana (Portuguese) etc. 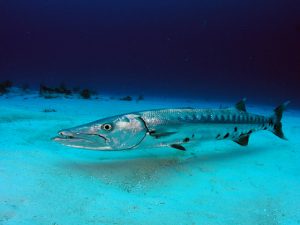 Great barracuda is a fierce looking fish with an elongated silver body and fang like jaws. It has a pointed head with large mouth. The lower jaw protrudes beyond its upper jaws. Great barracuda possesses strong jaws with conical teeth which are unequal in size. The gill cover of the fish consists of small scales instead of spines. The barracuda has two dorsal fines which are widely separated. The first dorsal fin has five spines and the other is located above the anal fin and has nine soft rays. It has a dorsal spinous fin above its pelvis. It has a fork tailed fin which makes it a fast swimmer. In coloration, Great barracuda are grey, silver, dark green or blue on top and fading into white towards its belly. Their cordial fins are dark violet with whitish tip.

Great barracuda are mostly found in the Mediterranean, Caribbean, western Atlantic and tropical waters. They are common in the Pacific Ocean (Malaysia, Fiji and Indonesia), Indian Ocean (Thailand, Maldives and Burma) and the Caribbean. They range in the Western Atlantic from Massachusetts, Bermuda to the Caribbean and Brazil. Towards the Eastern Atlantic, it ranges from Sierra Leone to St. Paul’s Rocks and Sao Tome Island. In the Indo-Pacific region, they are found across the Red Sea and Eastern Africa till Hawaii.

Great barracuda are solitary hunters. Juvenile barracudas form a large school of hundreds and thousands which also protects them from predators. Great barracudas are ambush predators. They camouflage themselves near sea grass and attack the prey by overrunning them with short brush of speed. Barracudas are attracted to shiny object as they mistake it for silver fishes that they commonly eat. Great barracuda do not have eyelids like most of the fishes, and if they are moving very slowly, it means that they are asleep. They are alert for danger even when they are sleeping and are aggressive if trespassed. 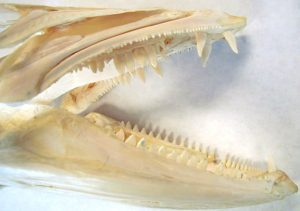 Great barracuda spawn during April and September. The male becomes sexually mature within 3 years; however a female barracuda takes at least 4 years to be sexually mature. They breed few times during the breeding season and release about 5,000 to 30, 000 eggs each time. Great barracuda exhibits dioecism. They mate in the shallow waters when the water becomes warm. The female releases the eggs and leaves it floating in the water until it is hatched. The baby fish or fry, takes shelter in the shallow water and estuaries until they are mature enough to venture out in the open sea.

The larvae settle in shallow waters where there is marine vegetation where it gets protection and food. They spend the first year of their life in shallow estuaries. As they mature, they venture out into the deep sea with reefs.

Great barracudas have an average lifespan of about 14 years.

Great barracuda have sharp eyesight and strong jaws which make them one amongst the few of the predators on top of the food chain. They are carnivorous and feed mostly on small fishes such as grunts, snapper, bream and mullets and occasionally shrimps and other marine invertebrates. They have a cannibalistic nature and may feed on their own young ones.

Great barracuda are close to the top of the food chain. Juvenile barracudas fall prey to the bigger fishes and also their own species. The only eligible predators of the great barracuda once they mature are the sharks, dolphins, giant tunas and goliath grouper. 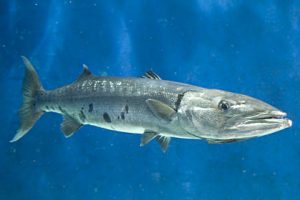 One ounce of boneless barracuda contains

Only young great barracudas are fit to be consumed. Mature barracudas which are more than 2 feet in length are best avoided as it is suspected to cause ciguatera fish poisoning.

Great barracuda is more of a game fish than a commercial one. It has been involved in the ciguatera poisoning cases caused by the accumulation of ciguatoxin in the flesh of the marine creature. Poisoned people suffer from gastrointestinal maladies, heart problems, weakness etc.

Great barracudas are large and have a fearsome appearance due to which they are usually misunderstood. They rarely attack humans. Incidents of attack maybe due to the attraction of a shiny jewelry or a diving knife which they mistake it for a shiny fish. Fatal attacks by the barracudas are rare. Few simple precautions taken by the divers can prevent such attack by the great barracudas.

Great barracuda population has remained stable and is not considered an endangered and threatened species. Earlier they were hunted down for their meat. Recently discovery proves that the majority of Great barracudas have high content of toxin causing ciguatera fish poisoning. Consuming fishes with this toxin causes illness, digestive related problems, physiological problems, headaches, muscle pain, fluctuation in blood pressure, heart problems etc. Juvenile barracudas or the ones below 2 feet in length can be consumed. The larger ones however, are considered dangerous and were made illegal to sell in United States.

Here are some of the pictures of the Great Barracuda. 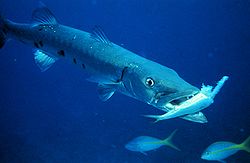 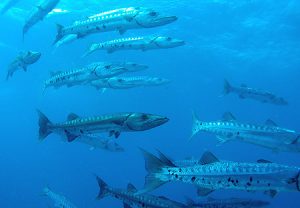