Pilot whales are large aquatic mammals belonging to the Globicephala genus. The genus consists of 2 extant species, the Short Finned Pilot Whale and the Long Finned Pilot Whale. Between these two species, the animals are found in marine waters all over the world. They are closely related to the extinct blunt-snouted dolphins. Extant relatives of the whale include the Risso’s dolphin, false killer whale, melon-headed whale and the pygmy killer whale. Pilot whales are often referred to as “Blackfish” along with a number of other species belonging to the Dolphin family.

The two species have similar physical appearance, making it difficult to identify them in water. However, there are certain distinctions between them, such as size and weight. Both species display specific sexual dimorphism as well.

Body: Their bodies are more plump and robust compared to most other species from the dolphin family.

Color: They are principally dark gray, black or brownish in color with light patches marking certain areas. For example, the area behind their dorsal fins is marked with a light grayish saddle pitch. They also have a pale anchor-shaped band under their chins while a faint blaze marking can be seen behind both eyes. Other lighter areas include a large pale marking on their bellies and the light genital patches.

Skull: The characteristic skulls of the two species help in their distinction and identification. Skull of the short finned species has a short and broad rostum along with a premaxilla covering a large portion of the maxilla. The long finned species have skulls with elongated rostrums and comparatively exposed maxillas. 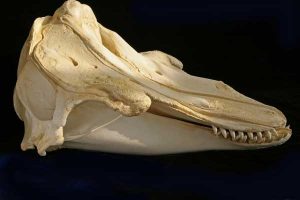 Head: The male short finned pilot whales have distinctive globular heads that can even droop and hang over their mouth, especially in older individuals. Both the species have one large bulbous melon in front of their heads. 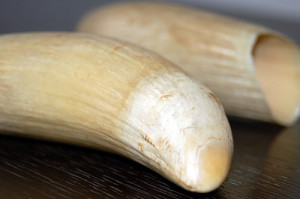 Fins and Flippers: The whales have a pair of sickle-shaped flippers with their length varying between the two species. The tail stocks are flattened from one side to another. They also have one dorsal fin sweeping backwards from the frontal part of their backs.

The global population of long finned whales is divided into two parts, with the first and smaller one inhabiting the circumpolar band in the Southern Ocean between the altitudes of 20° S and 65° S. Sightings have been reported off the coasts of countries like Argentina, Chile, South Africa, New Zealand and Australia. The much larger second population is distributed in the North Atlantic Ocean, with their range extending from the waters of South Carolina in US across to Morocco and Azores in south and the waters of Newfoundland to Iceland, Greenland and northern regions of Norway in north. They are also found in the western Mediterranean Sea.

The short finned species is less populous with their distribution range including the tropical and temperate waters of the Pacific, Atlantic and Indian Oceans. They are known to inhabit certain parts of California and Hawaii all year-round.

The short finned whales prefer warm tropical and sub-tropical waters with populations living around the outer boundaries of continental shelves. But, individuals have been reported to move towards the coastal areas, sometimes, far enough onshore to become stranded. 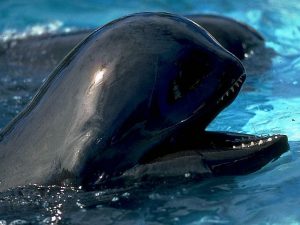 The diet of these carnivorous animals mainly consists of squids. They are also known to feed on various fishes as well as aquatic creatures such as cuttlefish, herring and octopus.

They have a characteristic behavior pattern that sets them apart from other similar species:

Pilot whales do not have many enemies due to their large size. However, the short finned species have a few predators such as killer whales and certain large shark species.

Here is some information regarding the adaptive features of these mammals:

The mating season for the long finned pilot whales begins in February and continues through March. The short finned whales are known to reproduce all year with the peak breeding season being July through August. 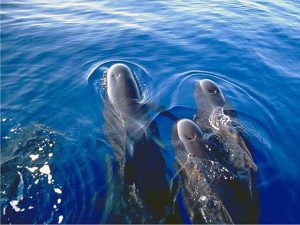 No evidence of male dominance and fight for mating rights have been found in either species. The male whale remains with the female only a few months after mating. One male can mate with multiple females in one pod. They contribute to the maintenance and survival of their mates as well as other members of the pod. Both species are known to reproduce once every 3 to 5 years with each female giving birth to 4 or 5 offspring during her entire lifetime. The female long finned pilot whale gives birth to one offspring 12 to 16 months after mating while in the short finned species, the gestation period lasts for about 15 months.

Female short finned whales are known to go through menopause after reaching a certain age. This is less common in the long finned species. Post-productive females often take part in raising the young whales in their pods. The long finned females have been found to reproduce and lactate almost all their lives.

The baby whale, also referred to as a calf, generally nurses for around 3 years. However, the lactation usually continues for longer periods of time, allowing for deep mother-calf bonds. Both male and female whales usually remain in the same pods they were born in, even after becoming adults. This is an uncommon trait among mammals, only found in certain other killer whale communities.

The average life expectancy of the males is around 45 years while the females live for approximately 60 years. 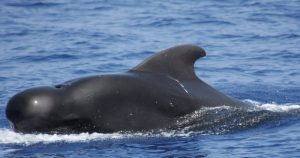 Both species are listed in the IUCN Red List of Threatened Species as “Data Deficient”. The Convention on the Conservation of Migratory Species of Wild Animals or CMS listed the long finned populations from the North Sea and Baltic Sea in Appendix II. The short finned species is listed on the CITES Appendix II. The animals are protected by law in certain countries to save them from extinction. But, whalers in various countries continue to hunt them due to their unclear conservation status.

Find out some fascinating facts about them:

Check out some images of these fascinating underwater creatures. 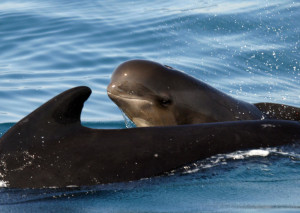