Bowhead whale is a baleen whale belonging to the right whale family.  Baleen whales are characterized by their baleen plates in place of teeth used for filtering food from the ocean. This dark bodied whale with a distinct white chin lives in the icy cold water of the Arctic and sub Arctic region and are also called Greenland Right whale and Arctic whale. Suggestive to their name they have a massive bow shaped head which can measure over 16.8 feet (5m) and comprises 30 – 40% of the entire body length.

The Bowhead whale can grow 50-60 feet (15-18.5 m) long and its massive body can weigh 75 tonnes to 100 tonnes. The dark coloured whale with white markings on the lower jaw line also has white marks which grows with age. Similar to other baleen whales females are slightly bigger than their male counterparts. They do not have any dorsal fin and has 230-360 baleen plates on each side of the mouth. It is the longest baleen of 3m (9.8ft) found amongst any whale. It is one of the most adaptive animals in the icy region. It has1.6ft (50 cm) thick insulating layer of blubber against the freezing cold and boney skull useful in crushing  8m thick ice. 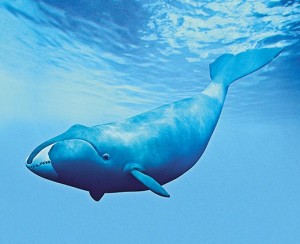 The bowhead whales live their entire lives in the Arctic oceans.

During the winter months, these Arctic whales are found in huge numbers in the South Western Bering Sea. In the fall they breed and calve. During spring with the breaking and receding of ice they move towards the north into Chukchi and Beaufort seas.

These Arctic whales are not extremely social and most travel alone or in a small heard. They assemble in groups of three in the spring and about fifty whales in the winter months. They are not aggressive and when threatened retreats under water.

The Bowhead whales reach their sexual maturity in ten to fifteen years. Sexual exchange takes place in pairs and in groups with one or two female bowhead whales. The female gives birth to a single calf in every three to four years after a gestation period of thirteen to fourteen months. The newborn calf is about 4.5m in length and weighs about 1,000 kg. The calf is nurtured with mother’s milk and mother and child may remain together for a year or more.

Bowhead whales have a life expectancy of at least 40 years, with an average range of 60 to 70 years similar to other whales but according to recent research in the 19thcentury it is speculated that they may have lifespan of more than 100 years.

The bowhead whale has been severely exploited by commercial harvesting. They have been hunted for their large amount of blubber, meat, bone and baleen. From the beginning of 15th and the 16th century the North Atlantic stock of Bowhead Whale have been commercially hunted. In the North Pacific such commercial hunting began in 1840. With the commercial exploitation the estimated number of 30,000-50,000 decreased to 3,000 by 1920s. Commercial whaling came to an end in 1921. 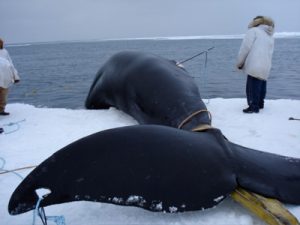 For the past 2000 years the Bowhead whales have been hunted by the indigenous people for food and fuel. Such harvesting is now regulated by the International Whaling Community enforced by the Alaska Eskimo Whaling Commission. The Bowhead whale has been listed by the National Marine Fisheries Service as “endangered” under the United States Endangered Species Act.

With the global climatic change the arctic region has been increasingly used for oil exploration. Threats to these arctic dwellers come from the increasing heavy industrialization with high risk of bio chemical hazard in the Arctic region. Contamination and anthropogenic noise from the off shore oil drills have become a major danger.

The bowhead population has increased after the commercial whaling has ceased. The small number of hunts by the natives is not supposed to affect the population recovery. The population of the Bering-Chukchi- Beaufort stock from the Alaska coast appears to be recovering and the count in 2001 was 10,500. The Department of Fisheries and ocean in Canada has estimated 14,400 bowhead whales in the eastern Arctic. This indicates a good recovery in their population when compared to the count prior to the ceasing of commercial whaling.

How we can help

Read more about the bowhead whale. Be aware of the human-induced danger to these whales of the Arctic regions and reduce such hazards.

Here are some Images of this gigantic mammals. 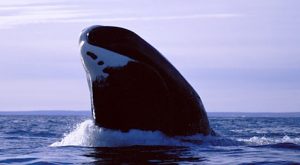 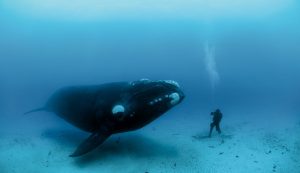