The Australian lungfish is a rare species of the genus lungfish, found in the rivers of Queensland. They are known with many names such as Queensland lungfish, barramundi and Burnett salmon. Considered as one of the six existing lungfishes in the world, these fishes can survive on land without water, for many days. Compared to other fishes, these aquamarines can breathe with a single lung, if required due to change in the water quality.

It is a primitive fish with special features that are worth mentioning. Its long heavy body separates it from other species of its kind.

Color: The color of the back, lateral sides, fins and tail of this aquamarine ranges from olive green to dull brown. The color on the underside is orange to pale yellow. During the breeding season, the reddish color on the sides of the male body becomes more vivid. The young ones bear a yellow or brown spotted pattern along with a dull pink stomach.

Size: This lungfish usually grows up to 1.3m and can reach to a maximum of 2m. Though both male and female counterparts of this species follow a similar growth pattern, the latter is comparatively much bigger than the former.

Weight: Australian lungfish can weigh up to 48kg due to its bulky body.

Gills: This aquamarine has five pairs of gills which are used for heavy breathing.

Eyes: The eyes of this aquamarine are relatively small compared to other fishes and experience a week eye sight. 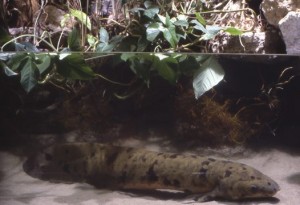 Fins: These lungfishes is equipped with paddle-like pelvic and pectoral fins.

This aquamarine is found mainly found in the North Pine River, Lake Samsonvale, the Brisbane River, Burnett River, the Mary River, Lake Wivenhoe and Enoggera Reservoir. These lungfishes have been introduced to many other rivers such as Caboolture, Pine, and Condamine.

Considered as one of the grimy species of its kind, the Australian lungfish is generally found in the slow flowing pools of south eastern Queensland. These categories of fishes prefer to live in still, shallow and stagnated pools which have some aquatic vegetation at its base. Generally present at a depth of 3-10metres, these fishes prefer to exist in small groups in underwater caves or waterlogged logs. Though this fish can tolerate cold, but it prefers temperature between 15-25° C. It can survive without water on the surface if enough moist is present. During the dry season, it submerges itself in the mud. The life of this aquatic animal is encircled in a pool.

This category of lungfish has distinct behavioral traits that are worth mentioning.

This category of lungfish is omnivorous in nature and hunts at night only. They prefer to feed on live foods and eat anything fleshy. Their food items mainly include pieces of meat, pelleted food, tadpoles, fishes, frogs, shrimps, prawns, aquatic snails, moss, molluscs, earthworms along with a variety of invertebrates and plant material available at the base of the river. The diet intake of the Australian lungfish increases with its growth. These fishes use electrical signals and smell of its prey to locate its hunting spot. 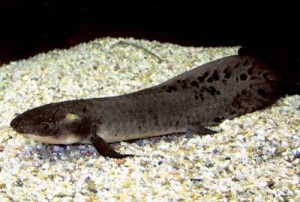 One of the serious threats to the existence of this category of lungfish is the formation of water impoundments in the river systems of Queensland.

These lungfishes have certain adaptive features which sets them apart.

These lungfishes usually spawn at night from August to December before the spring rains. They prefer to breed in still waters, where the water is sandy and deep. The ideal age for males to breed is 17 years and that of females is 22. After spawning, the female lungfish deposits 50-100 glued eggs in a clutch among the aquatic plants.

Few things have to be considered to keep these lungfishes as pets.

Housing: These fishes can be housed in large aquariums having water with low pH value, since an average Australian lungfish can grow to a maximum of 6feet.

Feeding: These fishes can eat almost anything fleshy and prefer small fishes. Pieces of meat, pelleted food, frogs and earthworms are also consumed by the aquamarines.

Temperature: Water temperature should be maintained in between 15-25 ° C, which is the ideal condition for this species to exist.

This fish’s conservation status is considered as “vulnerable” due to lack of evident research records to support any specific decision.

Some of the interesting facts of this lungfish are noteworthy.

Australian lungfish are rare fishes which are found only in Queensland. It is one of the protected species of Australia and is considered as the only living fossils belonging to the group of extinct animals, namely Dinosaurs. Hence, its preservation is mandatory.

Here are some images of this fish. 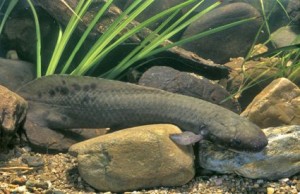 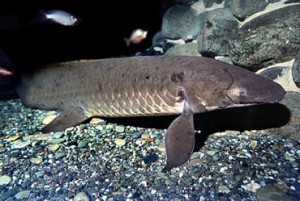