African lungfishes have elongated bodies like an eel with soft scales. They have narrow thread-like pelvic and pectoral fins which help them to swim and crawl on land. Prehistoric African lungfishes had two dorsal fins, a caudal fin and a tail fin all independent of each other. In the present day fishes, the three types of fins are fused to form a single fin-like structure. They have a flexible rod-like structure called notochord that acts as a support for their body. Lungfishes retain their notochords throughout their lives. These fishes can weigh almost around 25 pounds.

Lungfishes are voracious eaters. Their teeth are remarkably developed, compared to other forms of fish. The upper jaw has two rounded teeth at the front having a hard bridge that moves from side to side. The lower jaw is equipped with numerous crushing teeth. At first a lungfish sucks the prey in and crushes it. It then chews the broken carcass thoroughly. It is quite uncommon for a fish to eat in this way.

African Lungfishes are highly aggressive carnivores. It is thus best to keep them in isolation from other animals when they are adopted as pets. They are fearless and tend to attack anything that moves in their vicinity. Lungfishes as pets can bite human hands. They can survive in various aquatic conditions and even in areas having low levels of oxygen. 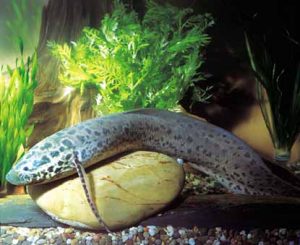 Lungfishes kept in a tank frequently rise up to the surface to get oxygen. Mostly it is not too active and lies down at the bottom of the tank. The fish is best when it is left alone. It is not very social and is known to attack even specimens of the opposite sex.

A special feature of this species is the process of aestivation. Aestivation is a process in which these lungfishes are in a state of dormancy. The lungfish eats and pushes the mud through its gills. It digs down through the mud and creates a hard cocoon around it with a slimy secretion. The fish leaves an opening for breathing and its swim bladder acts like lungs, enabling the fish to breathe atmospheric air. During this period, there is a lack of activity and the metabolic rate is low. Unlike the process of hibernation, which takes place during the winters, aestivation occurs during summer and times of intense heat and dryness. They can stay in this way for long periods of time. Reports have been found claiming that they can stay like this in underground muddy layers for as long as four years. During this time, a lot of ammonia is deposited in their bodies which can prove to be toxic and fatal.

In a zoo environment, they survive mostly on krill. They also have smelt, squid, fish gel, night crawlers and trout chow. These fishes are not fussy about their food and will eat anything, provided it is flesh of some other animal or fish. In some rare cases, they have also been reported to eat plants.

African Lungfishes are mostly found in temporary floodplains that remain completely dry for some parts of the year. They can also be found in marshes, swamps and backwaters.

African Lungfishes inhabit many parts of Africa. Some of these areas include:

The most common form of predators for this species is the shoebill bird. 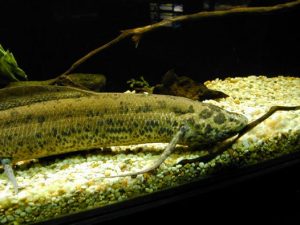 African Lungfishes have adapted themselves to be “dual breathers”. The young ones mostly breathe using gills but in adults, these gills reduce in numbers. Over their lifetime, they slowly change from water breathing to air breathing creatures. These fishes occasionally face situations wherein they may have to live in water having poor oxygen content. Sometimes drying up of their aquatic habitat may also pose a challenge for them. They have adapted themselves by developing an opening off the anterior portion of the esophagus which serves as a lung. They are obligate air breathers having two lungs.

The mating season for these fishes starts at the end of winter, around the beginning of the rainy season.

Lungfishes are oviparous and reproduce by laying eggs. These eggs are fertilized externally. They build nests which are like depressions or pits made on mud at the bottom of a water body. The nests are lined with plants. The females lay eggs and the males protect them. The white colored eggs are around 3.5 to 4 millimeter in diameter. It takes one week for the larvae to come out. The larvae use long, fan-like gills to breathe until they go through metamorphosis. For the first three weeks the young ones or fries as they are called, remain in the nests under paternal protection. They gills atrophy during metamorphosis, after which the lungfishes start breathing through lungs.

Under favorable conditions, African lungfishes are known to live for long periods of time. Specimens surviving for more than 20 to 25 years have been reported.

There are mainly four different subspecies of this fish. These are

Housing: The African Lungfish can live in a tank with other small fishes. However, it is best to keep them under solitary conditions as they are very aggressive and can eat the small fishes. Lungfishes grow rapidly and hence it is important that they should be provided with a large tank from the beginning. The water chosen for this species should be neutral or slightly acidic. Adequate ventilation should be provided in the water tanks to aid the lungfishes in breathing. You can decorate the aquarium in any way you like as long as you keep the aquarium free from any sharp objects.

Food: They are highly versatile in their food habits and they will also eat dry food if they are trained to do so. When the food is too large for their mouths, they will nibble small pieces from it. This is true even when they have other large aquatic species as tank mates.

Aestivation: They often hibernate without water and will dig out mud and create a place for it to aestivate. It is however strongly advised not to try to aestivate them in tank environments, as finding the right conditions in captivity can be a challenge.

It is difficult to buy aesthetically beautiful lungfishes from the market. This is because the places storing them keep numerous small lungfishes in the same tank or aquarium and these lungfishes attack each other causing permanent physical deformities.

African Lungfishes have been listed as a species of “Least Concern” by the IUCN.

African Lungfishes can be brought as pets from any pet shop selling aquatic animals. They can also be brought from online shops.

The following  pictures show some specimens of African lungfishes. 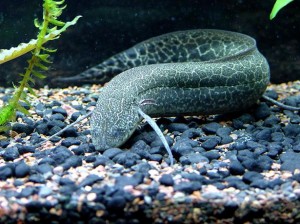 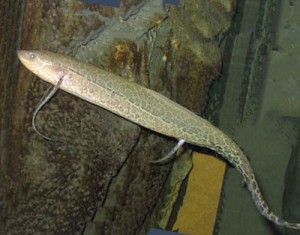