Yellow-Eyed Penguins are classified as a rare species of penguin, found only in New Zealand. Prior assumptions suggested its resemblance to Little Penguins but with more recent studies suggest its links with those of Eudyptes genus. It is also known by name of Hoiho in Maori. Very few of them are left now which is why they have been called endangered. Due to their yellow colored eyes and the stark yellow band around their eyes, they are named as such.

A brief description about its appearance is given here.

Size : It is quiet a large penguin, having a length of between 27 and 30 inches.

Weight : Maximum it may weigh around 7 to 8 kg prior to molting and right after it, weight might go down to a minimum of 5 to 6 kg.

Color : Juvenile yellow-eyed penguins have a grayish head and gray iris, unlike the adults that have light yellow heads with yellow iris. Adults have black feathers, with dark brown throat and chin. It has bright stripe of yellow from the nape to the eyes. 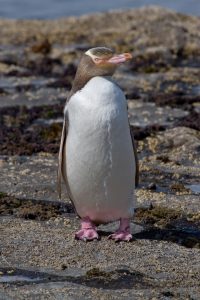 Hundreds of years back, their range constituted only of sub-Antarctic islands but after Waitaha Penguin suffered extinction, it extended its territories to New Zealand.

Their breeding habitats include scrubby areas and forests, amidst lupin and other trees. They make nests in furrows, slopes as well as the beaches itself. These habitats are a part of large or smaller bays.

It produces a range of sounds for various occasions. Very shrill long calls are produced by men during mating rituals and calls for locating each other during comebacks from foraging trips are common. Short calls are also used for communicating when they are on land. 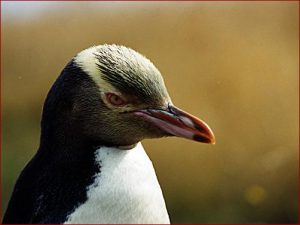 What do Yellow-Eyed Penguins Eat?

Fish is their primary food, comprising about 90% of their diet. Different fish species that it eats include opalfish, blue cod, New Zealand Blueback Sprat and red cods. Apart from fishes, they feed on arrow squids as well. When they are young, they mostly feed on a diet of squids, unlike the adults.

Young penguins are at a major risk from their enemies that are mostly stoats, feral cats, rats and dogs. At sea, shark species are its common threats. Other than these, humans degrading their habitats, destroying them are also other threats. Unknown diseases are another cause of worry for these penguins as it already happened in Stewart Island, killing almost half of the juveniles.

Some of their adaptive features are:

They engage in courtship in the month of august. 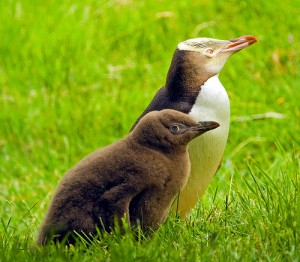 Breeding occurs in the month of September, when the females lay around 2 greenish eggs in the nests which have already been made in August. Color of the eggs changes from green to white in the next 24 hours of being laid. Sexual maturity is attained by the age of 3 or 4 when they breed start breeding. Both the parents incubate the eggs for around 40 to 50 days till they hatch.

The chicks are born after 40 to 50 days of incubation and are being taken care of by the parents till they are big enough to fend themselves. In the next 6 weeks after it hatches, they take turns while guarding the chicks. Whoever goes for feeding comes back to feed the baby and undertakes the duty of being with the chicks. To cater the demands of the hungry chicks, after 6 weeks, both go for hunting food for them. In February, fledging occurs and they are set free.

As per their natural history, they have a long life span, often living for around 20 years or even more. Compared to the females, males live much longer.

No sub-species of the Yellow-eyed penguin have been found yet.

They are a protected species and hence petting them is illegal in New Zealand, where they are found.

They have been listed under the Endangered section by IUCN Red List. Various conservational programs have been initiated to protect the species by the Yellow-eyed Penguin Trust apart from recovery plans. It has also stressed to keep dogs out of their breeding sites to ensure complete protection.

Some of these facts amuse the kids:

Some of the images of the Yellow-Eyed Penguin listed here will give you an idea of their appearance. 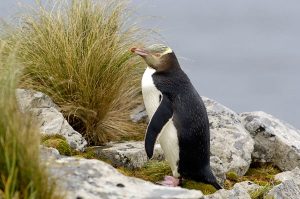 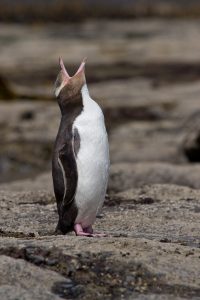