Find out physical description of these cute, little, adorable birds below.

Weight: Little penguins weigh about 1.5 kilograms on an average.

Color: The head and upperparts are generally blue in color. However, an immature penguin will have lighter colored upper parts. The ears have a slate-grey shade, fading to white from chin towards the belly. The beak is dark grey to black. The irises are pale silvery or bluish grey or hazel in color. The feet are pink with black soles underneath the webbing.

Beak: The beak size ranges from 3-4 cm in length. 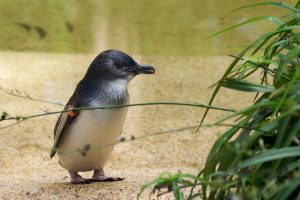 They are found in New Zealand and also along the southern coasts of Australia. Their range spreads from near Perth in Western Australia to around Coffs Harbor in New South Wales.

They often set up their colonies in sand-dune vegetation, sea caves and on headlands. The ocean is the Little penguin’s natural environment. However, they also live in man-made structures such as cavities beneath houses that are built a little raised from the ground level.

The behavioral traits of these angelic, little birds are very interesting to observe.

These birds feed themselves by hunting fishes such as anchovies, squids, small octopuses, planktons, pilchards and other small sea animals. They may also eat crab larvae, crustaceans and sea horses.

The adaptive features of this species help them to survive in their natural habitat. 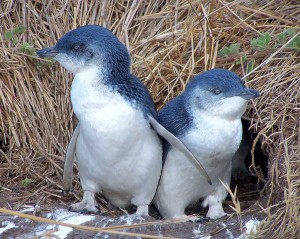 The breeding season of Little penguins vary from year to year and from colony to colony based on the availability of food. Usually the mating season is between June and August.

Female Little penguins tend to mature when they are 2 years old and males mature when they are 3 years old. Male penguins return to their colonies and reconstruct old burrows, dig new nests to attract females. Females arrive in June to meet aggressive males who perform complicated courting displays. They lay two eggs at a time. For the 35 day incubation period both males and females take turns in incubating the eggs.

Little Penguin eggs take almost five weeks to hatch depending on the food supply. Both males and females take care of the young in the first three weeks. In the next five weeks, the young penguins are fed regurgitated food by the adults. After this period ends they are forced out of the nest.

Little Penguins live for seven years on an average.

Little Penguins are listed in the Least Concern Category according to the IUCN. In Sydney, snipers have been deployed to protect the colony of Little Penguins.

There are few interesting facts about this cute species of bird.

Here are some Images of these incredible birds known as little penguin. 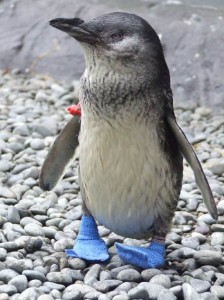 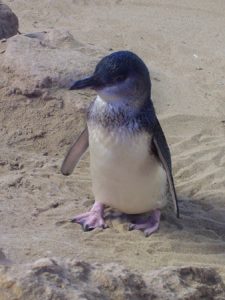