Gentoo penguins are marine birds found across the Antarctic Islands. Their style of walking, called waddling, is rather fun to watch as it involves the tail feathers swaying from side to side as they walk. They can dive up to a depth of 650 feet and stay underwater for long durations of time. 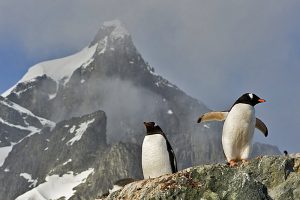 Color – The back is black and the dorsal side white, there are white eye-patches that are joined with a narrow band of white across the forehead. The bills are reddish-orange.

There are two recognized subspecies: 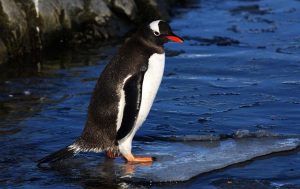 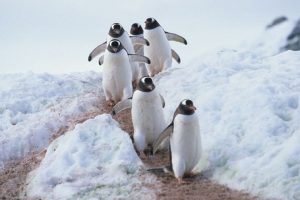 Gentoo penguins live in frozen and rocky Antarctic islands looking for food near the shoreline. Breeding penguins prefer flat grounds with small rocks and pebbles with which to construct their nests in vegetation. They may choose an area close to the ocean or far inland. 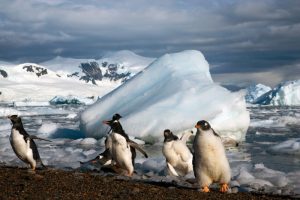 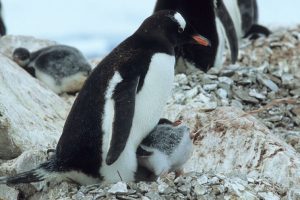 The wooing process for the gentoo penguins involves the male choosing a nest site and bellowing out calls, inviting females to come and check the site. If considered appropriate by a female, they engage in mutual bowing or trumpeting. The breeding season occurs once yearly. The female lays two spherical white eggs, which both parents incubate for around 30-40 days. 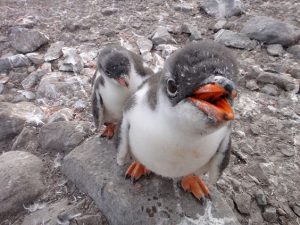 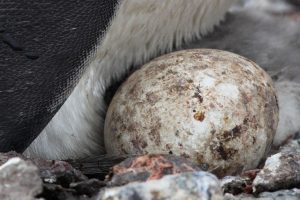 Chicks fledge after around 75 days until which time they stay in the nests with the parents looking after them. Eventually reaching independence after about 100 days, they reach sexual maturity when they are around 2 years of age, though only start breeding when they are 3-4.

The average gentoo penguin lives for around 13 years in the wild.

They communicate with each other through a variety of high-pitched squawks, low-pitched hisses, tactile and visual forms. Hungry babies produce a high-pitched chirp to let the parents that they need food. Juveniles achieve the adult sounds after their first molt. 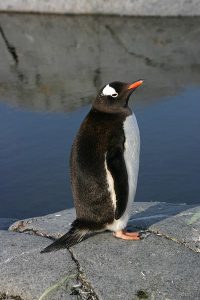 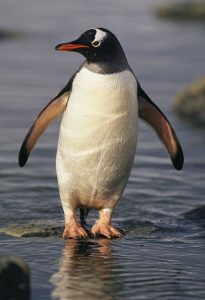 Gentoo penguins primarily eat crustaceans, fish, and squids, with krill forming the majority of their diet. 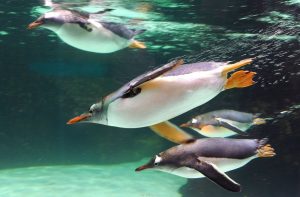 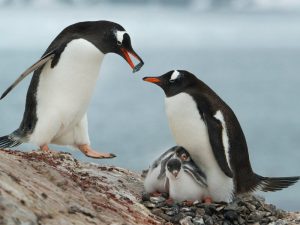 Killer whales, leopard seals, and sea lions prey on gentoo penguins in the water. There aren’t any documented terrestrial predator of this bird because of the harsh habitat they live in. Skuas, however, do prey on the eggs and young juveniles.

The IUCN lists the gentoo penguin under their ‘Least Concern’ category. 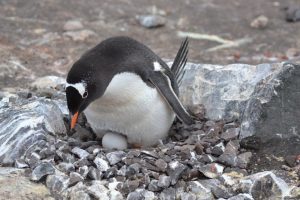