Height:  They are taller than the penguins belonging to the other classes. By height, they can stand up to 70 cm. Macaroni penguins are a large-size species of the penguin family, looking taller and heavier than the other species.

Weight: Macaroni penguins’ weight greatly varies on sex and the time of year. Precisely, on an average, an adult macaroni penguin can weigh around 5.5 kg. 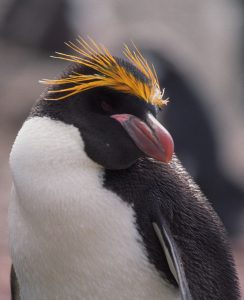 Color: These penguins are well-known for their varied colors. These colorful penguins are marked by a few very distinctive features. A long red beak and a tuft of thin but bright mustard-yellow to orange feathers on the crest of their heads give a very handsome look to these Antarctica birds. Otherwise, these penguins share more or less the same black and white features of most other species of penguins. Their throat, chin, head and the upper parts are black, in sharp contrast with their white under parts. Their black feathers bear a blue tinge when new, but turn brownish when old.

Where do macaroni penguins live

The habitat of the macaroni penguins is in the South Pole. They are spread from the Sub-antarctic to the Antarctic Peninsula, including the northern South Shetland Islands, the Heard and McDonald Islands, the Prince Edward and Marion, Crozet and Kerguelen Islands, and the Bouvet Island. While these birds forage for food, their groups will range north to the islands off Australia, New Zealand, southern Brazil, Tristan da Cunha, and South Africa. 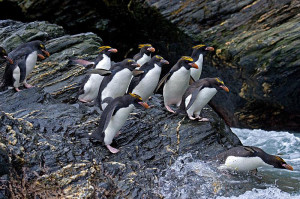 What do macaroni penguins eat

Macaroni penguins mainly live on crustaceans, mainly consisting of krill, as well as small fish such as marbled rockcod, painted notie etc., and cephalopods. Annually, these South Pole birds consume more marine animals than any other species of seabird. During breeding season, krill constitute almost 90% of their food.

While swimming or diving in the deep sea, the macaroni penguins have strong power of vision. Their sharp eyesight helps protect them from their predators.

Being very skilled swimmers, their flippers have developed accordingly, so as to give them their excellent power of locomotion under deep waters. They also use their flippers to tuck their heads inside while sleeping.

Also, these penguins use their feathers to ward off the extreme cold from coming in contact with their skin. 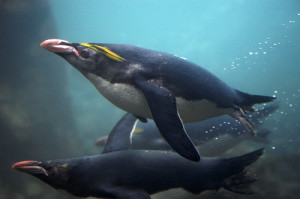 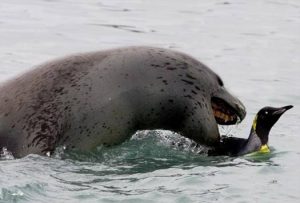 Among the birds, the Skua species, the snowy sheathbill (Chionis alba), and kelp gull (Larus dominicanus) hunt the penguin eggs. The skuas and giant petrels at times take the baby penguins. 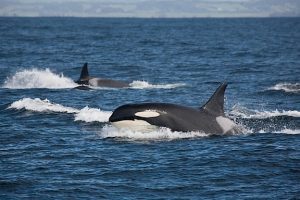 Like most other species of penguins, macaronis too use an elaborate set of sounds and calls, bows and displays for keeping their pair bond strong and secure. They also use this behavior also to locate, identify and feed their chicks.

When on land during breeding season, these penguins spend much time in preening for removing parasites and dirt, as also for maintaining the waterproof feature of their feathers. At times, preening each other mutually also helps to initiate the couple’s attachment.

Around the month of October, the macaroni penguins move ashore after spending the winter at sea. They gather in mammoth colonies in order to locate and choose their mates, and finally incubating eggs and hatch out their chicks. The male and female macaroni penguins are ready to breed at the age of six and five, respectively. 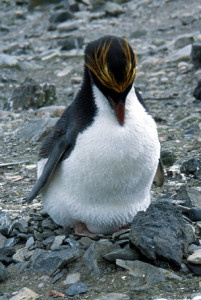 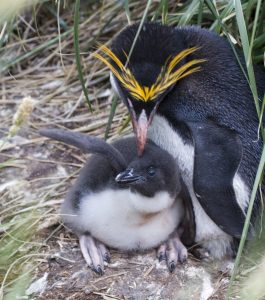 Macaroni Penguins breed during the summer months. Usually, these penguins breed in hugely packed colonies. The female penguins lay 2 eggs, making a shallow scrape in the ground (snow). However, it is extremely unlikely that the first egg will hatch out a chick. Usually only the second, larger egg is successfully hatches out after 34 days of incubation, and is incubated by both the parents. 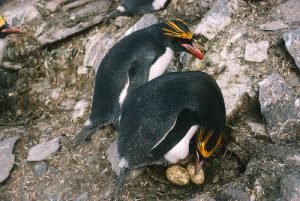 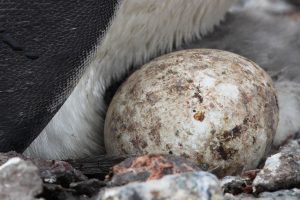 For the first 3-4 weeks, the macaroni penguin hatchlings are taken care of by the father penguin. The mother penguin hunts for food for both the father and the child. As the baby macaroni penguins grow bigger, they join a nursery with other baby penguins, known as a creche. With this, both the parents are able to find food to satisfy the gradually growing appetite of their baby.

When the chick gains its full adult plumage while attaining 10 weeks of age, after which, they are ready to go to sea.

The macaroni penguins may live for up to 15 years on an average in their natural habitats.

Macaroni penguins are migratory birds. When it is not the season of breeding, it is less likely that these birds would be found near land. When foraging, the penguins move away in groups all the way to the different islands off New Zealand, Australia, Tristan da Cunha, southern Brazil and South Africa.

Although, Macaroni penguins are not endangered species, but due to its sudden decline in population since the mid-1970s, the IUCN reclassified the conservation status of these creatures as ‘vulnerable’. 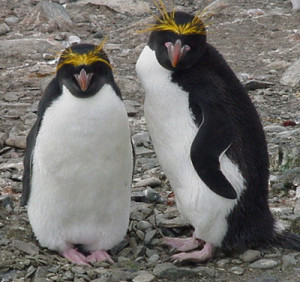 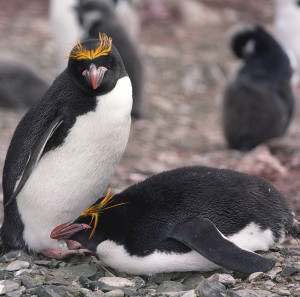 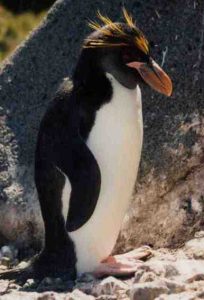