The spotted hyenas are large carnivores that roam much of the African continent. They are able, opportunistic predators and successful scavengers who have evolved to develop very useful hunting tools for these purposes. Read on to delve deeper into their physical features, behavioral characteristics including personality, and life-history. 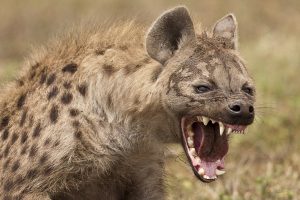 Color: They have brown or black spots on a gray, buff or yellow colored, coarse and wooly coat.

Teeth: They have one of the strongest bite forces among carnivores, aided by their powerfully built skull, strong jaw muscles, and dentition.

Despite their population decline, the spotted hyena is commonly seen in Kenya, Tanzania, Zambia, Zimbabwe, Mozambique, and a host of other sub-Saharan countries.

They are well adapted to live in savanna, semi-desert, mountainous forests, and acacia bushes at heights of as much as 13,000 ft. 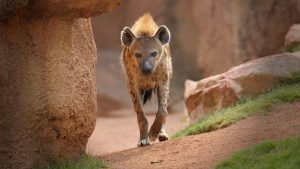 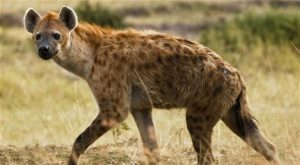 The breeding system that spotted hyenas follow is polygynous. During the mating ritual, the males maintain a timid personality, scampering off at the slightest bit of aggression shown from the female spotted hyenas. They do not have a specific mating season, their gestation period lasting for about four months. 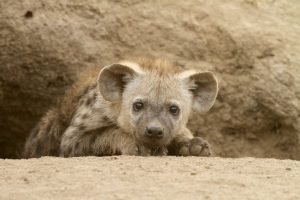 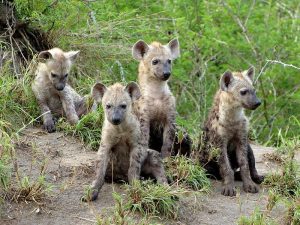 Usually, a litter of 1-4 well-developed spotted hyena cubs, are born after the long gestation with their eyes open. Two to six weeks after their birth they are taken from their burrow of birth to their communal den. They are weaned from their mother’s exceptionally nutritious milk when they are about 14-18 months old.

They reach sexual maturity between two and three years.

The average spotted hyena survives for around 20 years in the wild. One individual in captivity lived for 41 years.

These animals have a broad and varied range of vocal communications. They use squeals and groans to greet each other, a whooping sound as a contact call that gets faster and less spaced-out to express excitement after a kill. Other sounds include growling, grunting, and yelling.

The most striking part of their vocal repertoire is a giggling sound which resembles a loud hysterical human-like laughing. It is, however, not made out of pleasure, but is said to be exhibited by an individual on being chased or under duress.

Spotted hyenas are often mislabeled as scavengers but in fact up to about 70% of their diet comprises of kills that it has made, while only 30% made of scavenging other’s kills. They have been known to eat a wide variety of animals, including zebra, wildebeest, waterbuck, Thompson’s gazelle, Grant’s gazelle Cape buffalo, impala, warthog, hare, ostrich eggs, golden jackals, bat-eared foxes, and porcupines. 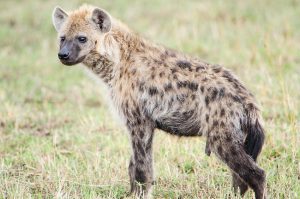 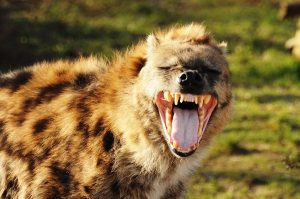 The main enemies of the spotted hyena in the wild are lions, with both of them competing for food in their shared habitat. In fact, an encounter between the two may result in the hyena’s death. 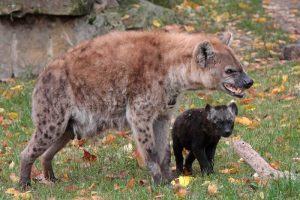 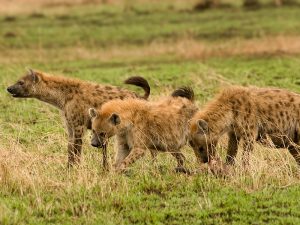 The IUCN has listed the spotted hyena under the ‘Least Concern’ category. 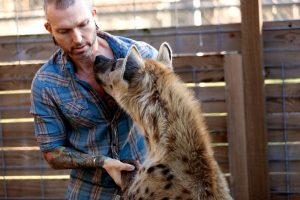 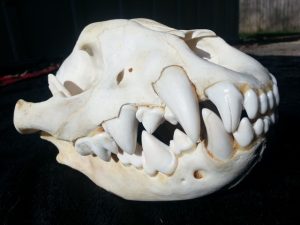