Striped Hyena belongs to the Hyaenidae family and is considered to be the smallest of the species of true hyenas. They emerge in the night and go into hiding by sunrise. It might be coward mostly but during certain occasions when it has to protect its food, it competes with the leopards.

Physical characteristics of the striped hyena are:

Weight : Adult Hyena might weigh between 20 and 55 kg with their average weight being 35 kg approximately. Males are more voluminous as compared to the females.

Color : Hair on their back is white near the bottom but towards the top it is darker in color, often brown or black. It has dark stripes and spots running across the forelegs from both inside and outside. Few dark stripes run vertically on the thigh’s outer portions. There are many color variations on the fur apart from these.

Looks : It has a thick cover of hair on its back running up to its tail. They resemble a dog but have slender features and long legs. 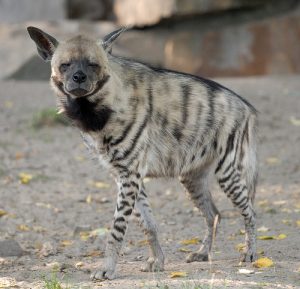 Striped hyenas are found in Egypt, Senegal, Niger, Chad, Mali, Nigeria, central Tanzania and Cameroon in the continent of Africa. They are sparsely found in India, Pakistan, Israel, Turkmenistan, Uzbekistan and Tadzhikistan.

Striped hyenas generally live in open areas or those having light thorny shrubs. Habitat often depends on the geographical location of these creatures. Desert regions are avoided in Africa; instead thick mountains are preferred in its northern parts.

Thick forests and mountains with high altitudes are not inhabited in Asian regions but they have been spotted at 3,300 m above sea level in Pakistan. Semi-desert vegetation, areas with thickets and boundaries of sand deserts are their biomes too. Traces of their existence near human settlements have been found in Israel’s populated areas.

These hyenas are omnivores and chiefly subsist on dead animals that are thrown out by the sea. It eats the decomposed bodies of animals, at various phases, which comprise bones, ligaments, cartilages and other body parts. It can consume any carcass but refrains from that of the vultures. It has a varied diet of oil willow fruits in Tajikistan and Uzbekistan along with melons in Israel. Dirt, dead bodies of buffaloes and feral horses are its main food in Jordan.

It does not have an extensive range of calls like some other species of Hyena. The cubs whine before engaging in suckling and ‘yelling’ on being pursued by attackers. When it is frightened, it makes a giggling sound and during fights for food or playing, it basically growls. Striped hyenas usually remain silent with very less vocalizations. 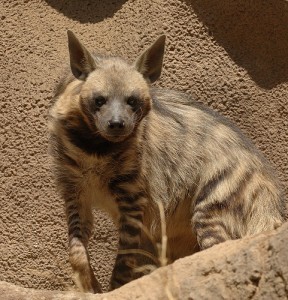 They compete for food with several predators, which again vary according to the locations. But as such they are not preyed upon by bigger carnivores like tigers and lions. Humans have also been found to harm their existence.

While being attacked for predation, it pretends to be dead to avoid being preyed on by the apex predators who eat freshly preyed animals.

A particular mating season cannot be pointed as it largely varies from one place to another. In some places like southeastern Turkmenistan, breeding happens in November and December while in other places it might be noticed in January or February. Mating can take place several times in a day.

After reaching sexual maturity by the age of 3 yrs, striped hyenas start mating. After the gestation period of almost 3 months, the cubs take birth. Maximum 6 cubs are born in a litter. Both the male and female care for the young ones.

After birth, the cubs are not able to see anything and their ear tubes are also closed. It takes around 7 days for the eyes to open. It has been observed that in the zoo weaning occurs after passing of 8 weeks.

They are said to live for around 12 years in the wild which might even extend for more than 20 years in captivity. 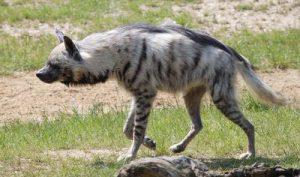 It might not be a great idea to pet these hyenas as they fall in the nearly threatened category. In captivity, it has been noted that they can be tamed like dogs.

In several parts of its range it has an endangered status. Striped hyenas have been listed as nearly threatened species according to IUCN. They live in several protected habitats in their range.

Take a look at some of the images of Striped Hyena here. 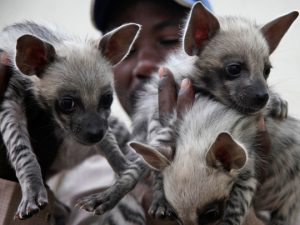 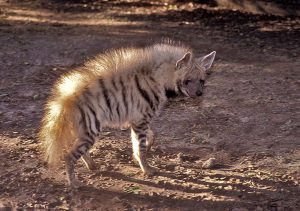