Brown Hyena is the rarest hyena species found only in some countries of southern Africa. These hyenas are distinguished from other hyenas by their shaggy appearance. This species of mammals is considered to be near threatened species by the IUCN.

This hyena species has an extreme shaggy appearance with long furs covering their body. 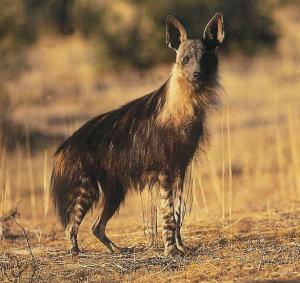 Color: The general color of their fur is dark brown. These mammals have a grey head along with tawny upper body. Their grey legs have dark horizontal stripes.

Body: The entire back and neck of these mammals are covered with long fur, approximately 12 inches (305 mm) long. The fur coat appears particularly shaggy around their back and tail.

Head: Brown Hyenas have larger sculls than those of striped hyenas.

Teeth: They have strong jaws and teeth. Young animals of this species are able to break the leg-bones of a springbok gazelle within 5 minutes of their birth. However, the strength of their jaw gradually deteriorates as their teeth become weak with age.

These hyenas are mainly found in several countries in the southern and southeastern regions of Africa such as Namibia, western and southern parts of Zimbabwe, South Africa, Botswana and southern Mozambique.

The hyenas of this species live in arid savannahs, scrublands, grasslands and semi-desert areas of southern Africa. They have a home range of around 90 to 180 sq miles (233 to 466 sq km). 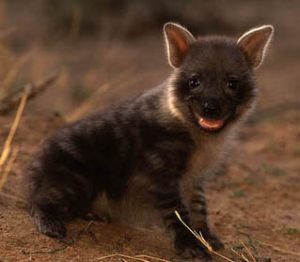 These mammals are generally scavengers in nature feeding on carcasses killed by much larger predators. Sometimes they supplement their diet with small mammals, rodents, insects and fruits. They are known for often appropriating the kills of cheetahs, leopards and black-backed jackals.

The general behavior patterns of these mammals are quite similar to other hyena species:

There are very few animals that prey on this species. Lions are known to feed on these hyenas. Spotted hyenas occasionally prey on Brown Hyena cubs. African wild dogs are another enemy species of these mammals. 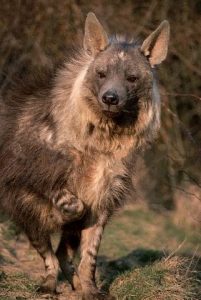 Their adaptive features and characteristics help them survive in their natural habitat:

This hyena species do not have any mating season. They can reproduce throughout the year.

These mammals become reproductively mature when they are 2 to 3 years old.Females are known to mate with dominant males of their own clan or other nomadic males. Their gestation period lasts for around 97 days. Females give birth to 1 to 5 young hyenas in dens located in remote sand dunes away from the territories of lions and spotted hyenas. The cubs weigh around 2.2 lbs (1 kg) at the time of birth. Females generally reproduce once every 20 months.

Usually only the most dominant female of a clan reproduces. However, if two females in a single clan reproduce at the same time, the mothers take care of each other’s cubs, although favoring their own. The male Brown Hyenas in a clan help the females to raise their cubs. 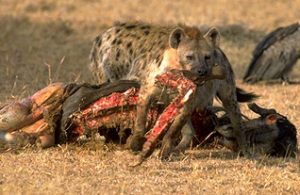 The cubs start eating solid foods once they reach 3 months of age. Around this time the mother hyena moves them to their communal dens. The mothers as well as other members of the clan bring food for the cubs living in the communal dens.

The hyenas of this species are born with their eyes closed, which opens around 8 days after their birth.The young hyenas leave their dens after they are fully weaned at 14 to 15 months of age.

These mammals have a lifespan of about 12 to 15 years in the wild. They are known to live up to 20 years in captivity.

Here are some interesting facts about this amazing hyena species:

This species is included in the “Near Threatened” category by the IUCN as the global population of adult Brown Hyenas has gone below 10,000. Overhunting and loss of habitat are two main reasons behind this decline in their numbers. These animals are under continual danger of becoming a threatened species. Due to these facts, various wildlife conservation societies are providing these animals with legal protections.

Here are some images of these amazing animals. 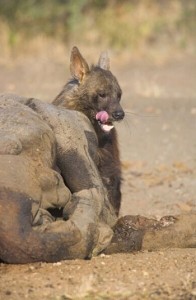 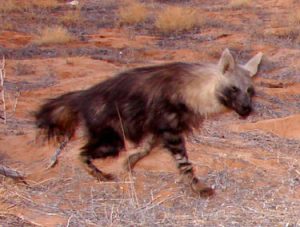