The Bushpig is a strong and stout species of pig family, commonly found in Southern and Eastern Africa. They are closely associated to the red river hog, another pig species that is also found in Africa. The Bushpigs form an important part of the African ecosystem. Although they are known to be wild and aggressive, they generally make good pets. Despite being preyed on by other animal species and humans their population have been pretty steady and constant, primarily due to their high reproductive rate.

Size: Adult Bushpigs reach a shoulder height between 66 cm and 100 cm. The females are smaller in size than the males.

Weight: Young Bushpigs weigh around 50 kg. The adults weigh up to 150 kg.

Tusks: Their tusks are quite short in size and very sharp. The upper tusks are hardly visible. The lower ones tend to grow up till 7 centimeters in length. 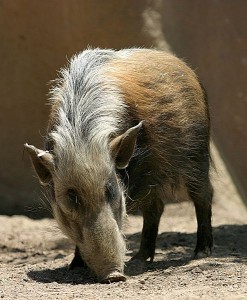 Body: Bushpigs have round bodies that resemble domestic pigs. Their signature marks for identification are the small eyes, pointed ears, muscular snouts and buckled toes. The body is almost entirely covered with shaggy hairs. Both male and female Bushpigs have mane, which bristles when they become restless and agitated.

Color: The color of their body varies between dark brown and reddish-brown, gradually growing darker with their maturity.  Their mane is of a lighter coloration compared to the rest of the body.  The upper portions of the face and the ears are also lightly colored. The young Bushpigs are covered with yellow-brown stripes when they are born, that gradually disappear.

Tail: The length of their tail is about 12 inches to 17 inches. The tip of the long tail is tufted. While running, Bushpigs keep their tails down.

Legs: Their legs are relatively short compared to the whole body.

Sexual dimorphism: The male Bushpigs are characterized by having a bony ridge. They also have their snout covered by warts.

Behavioral traits of Bushpigs are quite interesting to observe.

The agricultural crops that they have developed a taste for in recent past include potatoes, tomatoes, maize, sugar cane and some other vegetables.

Bushpigs are found in many locations across Eastern and Southern parts of Africa including Ethiopia, Somalia and Congo. They are also seen in the KwaZulu-Natal and Cape Province of South Africa. Bushpigs have been recently observed inhabiting some islands of Indian Ocean such as the Comoros archipelago and Madagascar.

Bushpigs are mostly being preyed by lions, leopards, caracals, spotted hyenas and pythons.

Bushpigs mate from the months of May through the end of June. 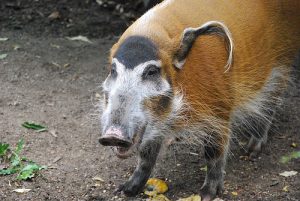 Bushpigs practice a polygynous mating system. The male Bushpigs do not allow other males to interact with his chosen group of females. There is strong competition among males for female attention. The males fight among themselves by butting their heads and shoving their foreheads.

The Bushpigs breed once annually. Female Bushpigs give birth mostly before the beginning of monsoon, between the months of September and November. The females generally move to a hollow or sheltered nest while giving birth. The gestation period generally last for 120 to 127 days. Females give birth to 1 to 4 offsprings but sometimes the number can increase up to 6.

The females wean the young ones for around 2 to 4 months. The males play an important role in taking care of the young ones and protecting them from intruders to their nests. Bushpigs can grow aggressive when they produce offsprings. The parents generally drive out the young ones when they are about 6 months old.These mammals reach sexual maturity at around 18 to 21 months of age.

The average life span of Bushpigs is about 20 years.

There are many subspecies of Bushpigs including:

Bushpigs are listed in the “Least Concern” category by the IUCN.

Here are some interesting facts about the Bushpigs.

Here are some pictures of Bushpigs. 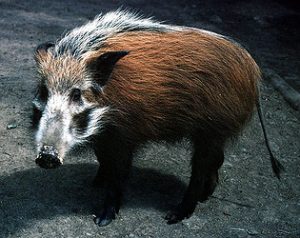 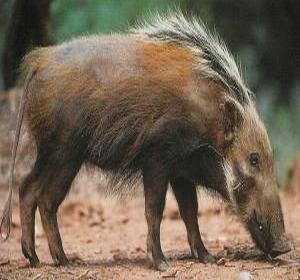