The African Civet is a species of civets that are spread throughout a wide range in the continent of Africa. They are famous for their musk, secreted from their glands, that has been used to make perfumes since centuries. Poachers have been hunting down these animals in the wild, and often keep them as pets for their expensive musk. The African Civet is the largest member of the ‘African Viverridae’, and the sole living member of its genus. 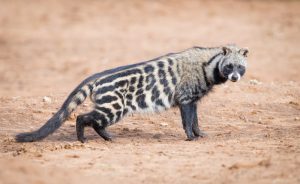 Size: African civets can reach 17 to 28 inches in length.

Weight: They can weigh anything between 3 and 10 pounds. The females are usually a bit larger.

Fur/hair/coat: They are covered with a short grey fur with black spots arranged in a few rows. Specific coloration of the body provides them with good camouflage.

Eyes: Their round eyes are encircled with black rings.

Body: With its wide head, long neck, a pointed white muzzle, small ears and eyes, and white forehead, the African civet closely resembles a raccoon. Its claws are always exposed and are non-retractable.

Scent Glands: The glands of these creatures look like two swellings close to their genitalias.  On an average, they are 2 cm wide and 3 cm long. The glands in the males are slightly larger than the females’, and can produce a stronger secretion.

Teeth: They have 20 pairs of sharp teeth, which are used for catching their prey.

In the wild, the African civets would live for around 12 years. In captivity, their longevity is up to 20 years.

The African Civets lives in the savannahs and in the dense forests of central and southern regions of the continent of Africa. They rarely inhabit the desiccated regions. Though, they some populations are found in the regions along the river systems projecting into the arid areas of Chad, Niger, and Mali.

Habitat: Where do African Civets live

African civets choose all areas that have a constant supply of enough water, food and shelter. They normally live in mountains and the swamps, and in the lowland forests and tropical or subtropical grasslands. 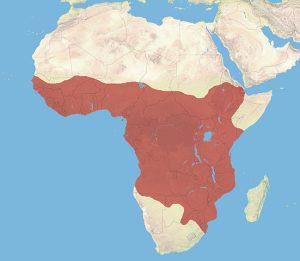 Between 1776 and 2000, six distinct subspecies of the African civet has been identified:

Little is known about the behavior and deportment of the African civet, since it is an extremely secretive species, and is not seen in daylight. These animals are not at all dangerous, but are rather docile. They are nocturnal, and primarily lead a life in solitude. However, they would gather in groups of up to 15 individuals during mating season. African civets are arboreals (i.e., dwell in trees) and come out to hunt only after sunset. This is the time they are most active. They are also excellent swimmers.

During the day, they spend the hours resting on the safe heights of tree tops or in dense vegetation. The females that have cubs spend the time in their nests. Basically, these creatures tend to move around in places where there is plenty of cover. They are extremely territorial, and would mark their territories secreting the scent from their perineal glands. Scents glands play an important role in their social and sexual behavior like, whether a female is oestrus, etc.

When they are threatened, African civet produces loud growls and cough-like sounds.

Diet: What Do African Civets Eat

African civets are omnivores, that is, they feed upon both plants and animals. Like most other clawed mammals, they do not use their claws to catch prey. They are opportunistic feeders with a long diet list. Its diet includes fruit and various vegetation, insects, eggs, birds, reptiles, frogs, fish, crabs, carrion, mice, and even small mammals like young lambs, etc. 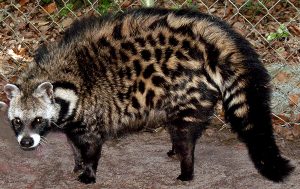 The reproductive behavior of these animals in the wild is also not known completely. For those that dwell in South Africa, the breeding season begins in August, and extends for almost 6 months (January). For the population in the east coast (including Kenya and Tanzania), the season of breeding is between March and October. An otherwise solitary animal, these civets are seen together only during the mating season. The females of the species normally deliver up to 4 babies, with a gestation period of about 2 months. The nest for the young ones is built by the females. Their nest is basically an underground burrow that has been deserted by other animals. The baby civet is kept in the burrow to assure complete safety. Though, at times, they also nestle in hollow tree trunks.

They are able to give birth to up to 4 litters in a single year. The litter size is 1 to 4. Each cub feeds on the female’s milk using its own teat for around 6 weeks, and begins eating solid food before it is weaned from 14 to 16 weeks. 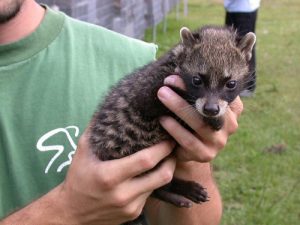 Though the newborn juveniles are almost the size of kittens, they are not completely helpless like many of their other close cousins. The females give birth inside their burrows. After birth, the baby civets are quite mobile, and have adequate amount of body fur, which is soft and dark. The female takes care of its babies until they grow up strong enough to defend themselves. The babies suckle milk for around 6 weeks. They begin consuming solid food after they are weaned for the first time at age 14 to 16 weeks.

The female baby African civets attain the age of sexual maturity at around 1 year of age, while for the males attain it earlier, between 9 and 12 months. The females can get pregnant for the first time when they are about 14 months old. 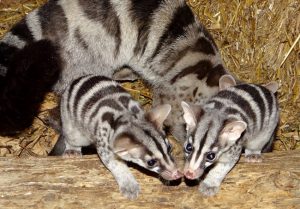 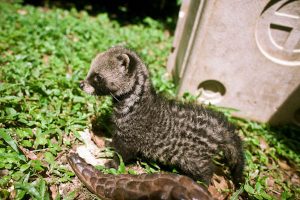 Predators: What eats an African Civet

Large predatory cats are the most common predators. Other predators like lions, leopards, snakes and crocodiles also fall under the list of their main predators. 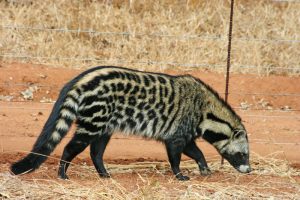 The African civet is not a threatened/endangered species. The IUCN 3.1 has categorized them under the ‘LC’ (Least Concern) species list. 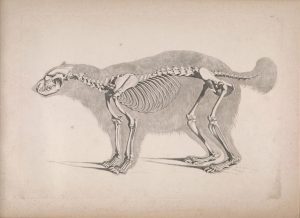 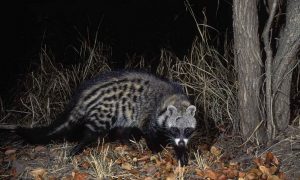