African forest elephants are smaller of the two elephant species found in Africa, the other being the bush or savanna elephant. Until 2001, they were considered the same, being collectively known as African elephants.

Color: Forest elephants have darker coloration than the bush elephants found in the savanna. 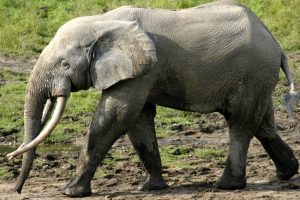 Tusks: Their tusks are harder, straighter, and downward pointing in contrast to the bush elephants’ curved tusks. They are yellow or brownish. The tusks can grow to up to 5 ft (1.5 m) and weigh 50-100 lbs (23-45 kg).

These elephants are found in the Congo Basin, in the countries of the Democratic Republic of Congo, Central African Republic, Gabon, Ghana, and Ivory Coast.

They live in the dense, tropical rainforests. 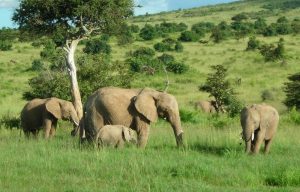 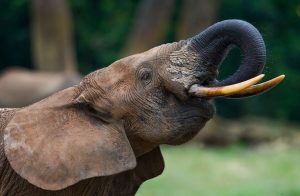 These elephants are herbivores. Their feeding habits vary seasonally. During the wet season they live on fruits, but when it is dry, they usually make do with leaves and grasses. They use their trunk as an appendage to pluck their food and putting in their mouth.

They are polygynous, and males may have more than one female mate at a time. Males experience an aggressive state called ‘musth’ between the ages of 15 to 25 and can be rather unpredictable during these periods. A fluid is secreted from the temporal glands between the ears and eyes, which they rub on bushes and tree trunks to spread the scent.

There is no fixed breeding season, as the females are polyestrous, and can conceive at any time of the year. The gestation period for forest elephants is between 22 and 24 months, after which the mother gives birth to a single calf (twin births are rare), weighing around 232 lbs (105 kg). Females usually breed once every 5-6 years, devoting all their attention to train their calf about the nuances of being an elephant.

It takes around a year and a half for the tusks to emerge for the calves. They are weaned at about 4-5 years of age. They eventually become independent when they are around 13 years old. Males reach sexual maturity between 8 and 15 years old, while females do so between 11 and years of age. 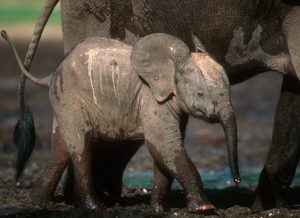 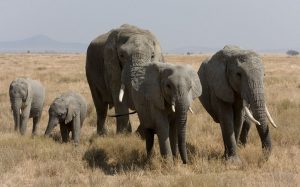 The primary mode of communication for forest elephants is by sounds of low-frequency, around 5 Hz. They also communicate through chemical (scents) and tactile channels. 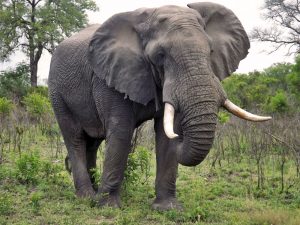 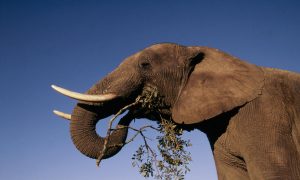 Like all other elephant species, adults do not have any natural predators in the wild. Calves may rarely be hunted by carnivores sharing their range.

Since this species has been so recently described and separated from the bush elephants, as well as their habitat being unsuitable for detailed study, the conservation status of forest elephants is yet to be evaluated. But along with the bush species, the forest elephants are classified as ‘Vulnerable.’ The species has been poached for decades for the ivory from the tusks. The ivory from their tusks is the most sought after because of its toughness, more so than those of the bush and Asian elephant.

How many African forest elephants are left in the world 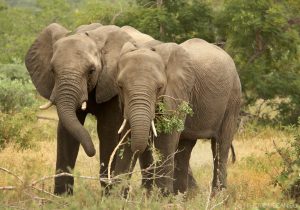 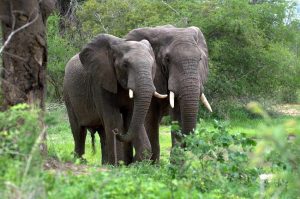