The Asian Elephant is a species of elephants distributed throughout the Indian subcontinent and Southeast Asia. It is one of the largest living creatures on the planet and is seen in numerous zoos across the world. Their population is declining rapidly mostly because of habitat loss and poaching for illegal trade. Poachers are known to hunt these animals for their skin, but mostly, for their tusks (teeth), which are highly expensive in the world ivory trade. The elephant plays an important role in the continent’s diverse cultures and religions.

Skin: The entire body is wrinkled, rough, very thick, and usually grey, with an average thickness of 18 mm (0.71 inch).

Feet: All the four large and thick feet have nail-like structures, five on each forefoot, and four on the hinds. 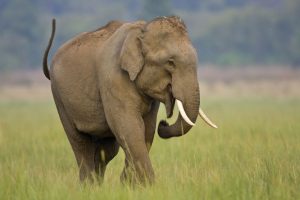 Sexual Dimorphism: Unlike the male elephants, the female Asian elephants usually lack tusks, and are also relatively shorter than their male counterparts. However, some male individuals may also lack the tusk, especially those from the Sri Lankan population.

On average, the Asian elephants live for 60 years in the wild, and 80 in captivity.

While the historical range of Asian elephants was 9 million sq. km., the present geographic range is only 500,000 sq. km. – which is only 5% of the historical range. Presently, it is made of small discontinuous regions in the Indian subcontinent and Southeast Asia, from India and Nepal in the west to Borneo in the south. 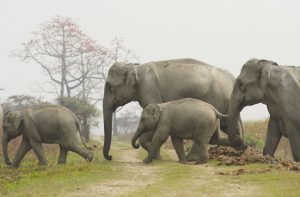 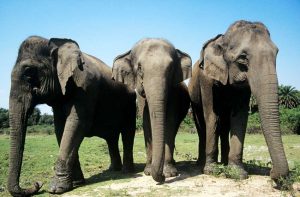 The Asian Elephant has three living subspecies, along with the nominate species: 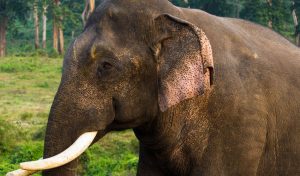 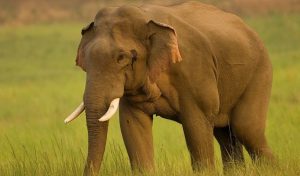 Asian elephants develop profound bonds with the family. They live in closely-packed matriarchal groups known as ‘herds’, which is made up of related females. A leader of a single herd is the oldest, and usually, the largest female, known as the ‘matriarch’.

A single group can have anything between 8 and 100 members, depending upon the size of a family and the terrain. Each elephant moves along with its own herd and drinks at least once a day. Hence, they are never far from a source of water.

These giant mammals display expressions and signs of joy, sadness, grief, anger, playfulness, etc., and are outstandingly intelligent. They can store memories for many years. By virtue of this memory, the group leader can remember the way leading to an earlier water source during the dry seasons and lead the heard for even tens of miles.

Like African elephants, the Asian elephants use their different levels of calls and sounds, called ‘trumpets’, to communicate between herd members, social groups and potential mates.

During the mating season, the male Asian elephants (bulls) will engage in fights with each other to win over an estrous female. However, instances of strong fights in such cases are very rare.

When they are between 10 and 20 years old, they undergo a yearly biological phenomenon called “musth”. During this period, the testosterone level rises to almost 100 times than during other times of the year. It is this secretion that makes the males aggressive.

After choosing a mate and sessions of successful intercourses, the female (cow) becomes pregnant. The gestation period is 18 to 22 months, after which, it gives birth to one single offspring (calf), or twins on very rare occasions. 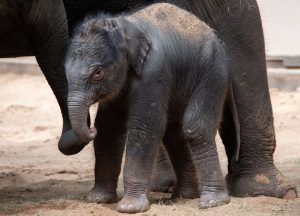 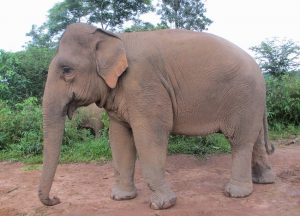 Picture of an Asian Elephant

During birth, a young juvenile weighs about 100 kg (220 lb). Its trunk is devoid of muscle tone, and hence, uses the mouth to suckle the mother. In fact, the young elephants take a few months to gain control over its trunk.

After birth, a calf is taken care of and protected by the entire matriarchal herd. The male animals usually leave the family unit, or are chased away, when they are 12-15 years old. They go on to lead a solitary life, or make temporary bachelor groups with other males.

After giving birth to a baby, the females generally do not breed again as long as the calf is not weaned. This recess results in an interval of four to five years. Unlike the male animals, the female animals stay on with the group. Both the male and the female Asiatic elephants attain sexual maturity when they are around 17 years old.

By virtue of their gigantic size, the adult Asian elephants practically do not have any natural predators. However, tigers have been recorded to attack and kill the baby elephants, especially when they are separated from their mothers, or are stranded from the group, or else, orphaned.

At present, a population of only 40,000 – 50,000 Asian elephants is left in the wild. Because of their declining population, the IUCN 3.1 has categorized them under their ‘EN’ (Endangered) species list. 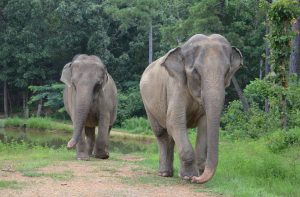 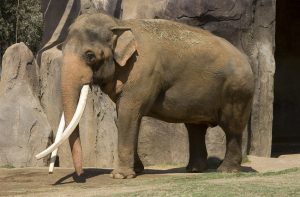