The Asian Palm Civet (pronunciation: ‘ey-zhun paam si-vit’) is a small cat-like arboreal native to South Asia. Though they are famous for assisting in the production of the world’s most expensive coffee, they are often considered as pests or creating noise and destroying crops, and are often trapped and killed. They are also known since ages for their sweet-smelling musk, which is still used for the production of expensive perfumes. 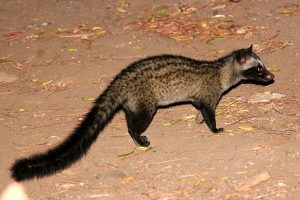 Body Color: The entire body is covered with gray, bushy and coarse hair/fur with three rows of black markings. A distinct white mask is present across its forehead.

Feet: The lower legs are black, short, and strong with claws adapted for a good grip while climbing.

Eyes: Roundish to almond shaped eyes with a thin, black line between the eyes, and a small white patch under both.

Nose and Muzzle: Each side of the nostrils has a white spot; the muzzle is black.

Tail: The lateral half of the tail is black.

Teeth: Both jaws are lined with sharp, pointed teeth.

Sexual Dimorphism: The male and the female can be differentiated by darker and lighter shades, respectively.

This cat dwells in the Southeast Asian tropical rainforests from the Himalayas and the southern China, the Malay Peninsula, to the Philippines, and the Indonesian islands.

Habitat: Where do they Live

These arboreal creatures mostly prefer thick woody regions and dense forests, but are also found in agrarian areas and even close by humans to find food easily. 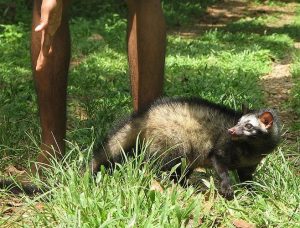 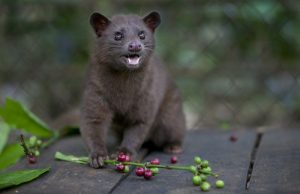 Though its taxonomic status has not still been evaluated, 30 different kinds of subspecies have been described between 1820 and 1992.

Palm civets are arboreal, using the same tree and the resting site repeatedly in the same area for a long period, and choose trees with holes and vines for camouflaging. Basically not dangerous, they might counter-attack or bite, if provoked.

This civet leads a lonesome life except during mating season. They can scent different kinds of excretions including urine, feces, and perineal gland secretion, which differ between males and females. 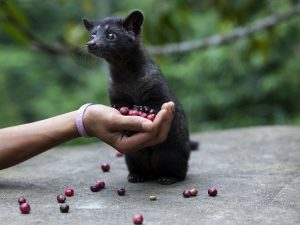 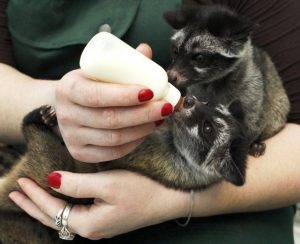 Diet: What do they Eat

Nothing much could be studied about the mating rituals or sexual behavior of these secretive creatures, except for the pets or the captive specimens from the zoo. A team of scientists could study the mating of a pair of these civets, back in 2010.

A newly-born juvenile weighs around 80 grams, and opens its eyes on the eleventh day. The role of the father is not much known. The baby civets are weaned by the mother almost after 2 months. They take one more month to grow fully, and attain the age of reproduction at about one-year.

The commonest predators of the Asian palm civets include lions, tigers, leopards, large snakes, and crocodiles. 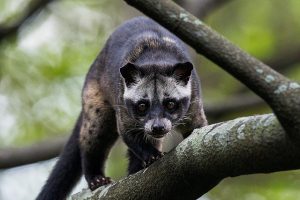 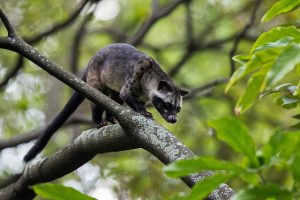 The Asian palm civets are popular for aiding in the production of the world’s most expensive coffee, the ‘Kopi Luwak’ or ‘Gourmet Civet Coffee’, sold for up to over one $100/pound in the world market. This is produced by force-feeding them with coffee beans, kept in very small enclosures. The beans are then passed through the digestive tract, where they get a ‘gamy’ (fermented kind of) flavor. The pits are then extracted from their feces. Animal rights groups have condemned this as an act of abuse and cruelty.

Despite poaching and illegal hunting, the population is quite stable. The IUCN 3.1 has categorized them under ‘Least Concerned’. 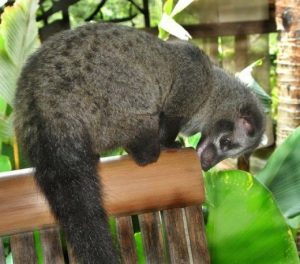 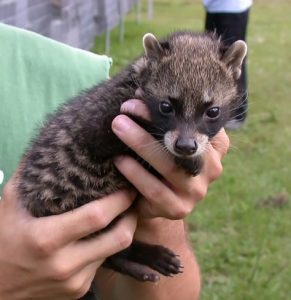