The Asian Long-Horned Beetle (abbreviated as ALB) is a species of beetles that are considered as pests and evolved in a few Asian countries. However, now, they are invasive outside their native range. Active measures have been taken to resist, quarantine and eradicate these invasive creatures from destroying hundreds of thousands of trees in the wild.

Body: The color is glossy black with 20 white spots all over. The body is divided into three divisions – head, thorax, and abdomen.

Wings: Two pairs of wings guarded by the exoskeleton.

Antennae: They are a slightly curved, striped in alternating black and white, and can reach a length of about 4 cm (1.6 in). 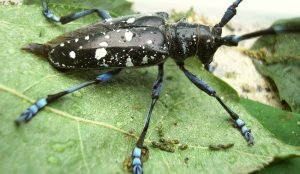 Feet: Three pairs of feet like most other arthropods, with tiny poignant structures at the end of each foot.

Sexual Dimorphism: The body size and the antennae of the males are larger than those of the females.

The young beetles would take around one to three years to attain maturity. Once they hatch out, the male adults live for approximately 50 days, while females for about 66.

The creatures are native to eastern China, Japan, and Korea, but had accidentally been introduced to many countries including the US, UK, Canada, Austria, France, Germany, Italy, etc.

These beetles usually occur at low densities by the edge of mixed forests where they find various host species of their choice, including poplar, birch, willow, elm, maple, ash, horse chestnut, and others. 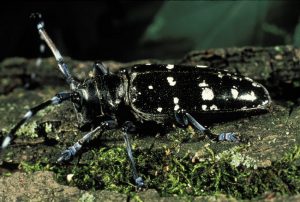 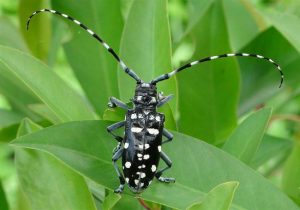 These beetles are diurnal, staying very active all day with their peak activity hour falling between 8 AM and 12 PM. They are relatively more active on warmer and sunnier days, rather than cloudy, dull or cold days. The adults of these creatures infest several species of host trees after getting attracted to the volatile compounds that the trees secrete.

These arthropods have a relatively higher capability to fly, with the flight reaching at an altitude of up to 1200 meters. However, they usually do not fly for more than 75 meters. The males of the species are extremely territorial, and their fights might often end in loss of legs or antennae.

The adults of these insects are herbivorous, feasting upon leaves, twigs, and several kinds of plant matters. In the United States, the beetles feed on birch, chestnut, green ash, maple, and a variety of other trees.

Interestingly, the females release a sex hormone from the cuticle to which both the males and the females get drawn. As they reach the secreting females, the males attempt to engage in the act of copulation. Mating occurs on the trunks and branches of the host tree, usually between 12 and 6 PM.

After successful copulation, the male beetles begin to guard the female, often for several hours post-copulation, so that the female beetle cannot mate with other males, since the females have the instinct of copulating several times either with the same male partner, or with multiple males.

On an average, the female Asian long-horned beetles lay 32 eggs. The eggs are laid singly over a period of 11 days and take another 11 to hatch. A female beetle would lay a total of 30 to 80 eggs in its entire lifetime.

The young ones primarily lead a secluded life as larva and pupa inside the cavities of the host tree, as long as they do not attain complete adulthood and eventual sexual maturity. The larvae are about 50 mm in length with a cylindrical, elongated shape, with a pale white coloration with a varied texture on the ventral side. The stage of the pupa lasts for about 13-24 days, after which it turns into an adult, and tunnel its way out of the host tree.

The juvenile Asian long-horned beetles feed on the xylem, phloem, and the healthy barks of more than 24 hardwood tree species, mainly the poplar. The beetles are able to begin their sexual life immediately after emerging from the host tree. 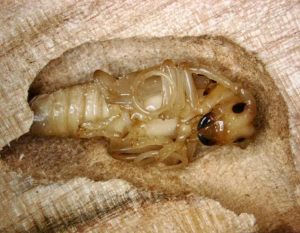 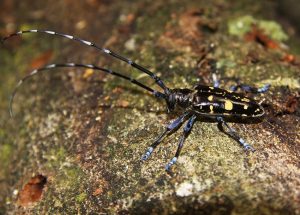 Toads, spiders, birds, lizards, scorpions, wasps, and small mammals are the primary enemies of these creatures.

They have been grouped under the ‘Not Evaluated’ category by the IUCN 3.1. 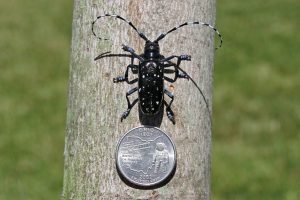 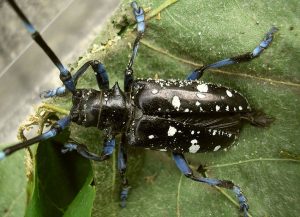