The Colorado Potato Beetle is a species of arthropods that are considered as pests throughout their range. They are mostly found active, infesting thousands of acres of crop fields, especially potatoes, which is their preferred host plant. Several measures have been taken to prevent these creatures from this act of destruction; however, treatment of these arthropods in home gardens can be more challenging.

Weight: They can weigh anything between 50 and 170 mg.

Body: The shape is rounded, with yellowish-orange coloration on the exoskeleton (cover) with black longitudinal stripes on the wings, and a few black spots behind the head, from where, two dark brown antennae, with uneven tips, protrude out.

Feet: Three pairs of feet with yellowish tinge at the top and black to dark brown at the tips. 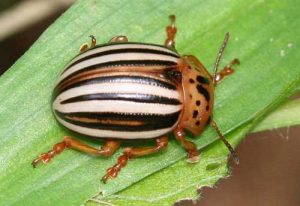 In the wild, the typical lifespan of these insects is between 2 and 12 months.

Colorado potato beetles live in the temperate and terrestrial suburban agricultural fields, grasslands, gardens. Native to a small region in western North America, they have spread very quickly in the potato crops across the other parts of America, Europe, and Asia, totaling an area of over 16 million sq. km.

The primary means of their communication and perception are smell and vision. They select and find out their nearby host plants through the chemical signals emitted by the latter. The creatures also retain their sexual communication by means of these signals.

Studies show that the adult potato beetles can sense the wavelengths between yellow and ultraviolet, as also polarized lights. When an individual male is done with selecting its host, it emits its ‘aggregation pheromone’, with which both the males and the females (and even the nearby larvae) get attracted to in the same location. Before mating, the females secrete a sex pheromone in order to attract the males.

As their name suggests, the preferred and primary host of the Colorado potato beetle is the potato plant; however, they may also feast upon a number of other plants as well, including crop plants like tomato, tobacco, eggplant, and pepper. 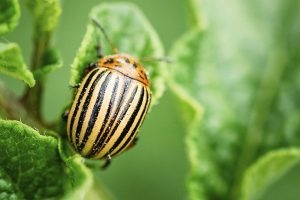 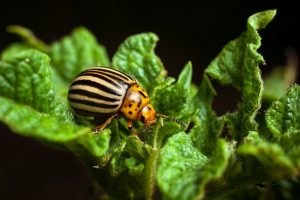 The Colorado potato beetle has a polygynandrous (promiscuous) mating system. They choose multiple partners when the breeding season checks in. After the winter months, they become active usually around the springtime in May, and begin mating and infesting the crop fields and gardens. The adult beetles feed for a very short period of time before mating.

The female Colorado potato beetle lays the eggs on the undersurface of the leaves of their host plant so as to protect them from direct sunlight. They deposit over 300 eggs within a span of four to five weeks.

Depending upon the temperature and latitude, the eggs hatch in about 4 to 10 days, from which the larvae are born, with their four instars lasting for around 21 days. These insects would feed on the leaves of the host plant, almost continuously, only stopping during molting.

Before pupating, the larva drops into the soil from the plants and make a spherical cell while metamorphosing into a yellowish pupa. This stage lasts for about 5 to 10 days. The arthropods have 1 to 3 generations every year. 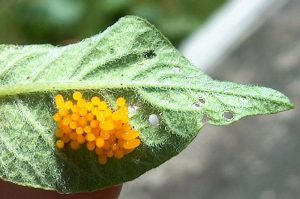 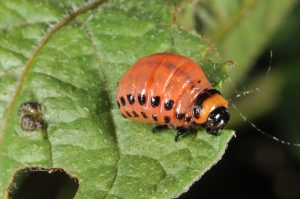 Several species of spiders, larger beetles and bugs have been known to eat these creatures. 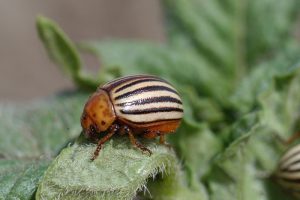 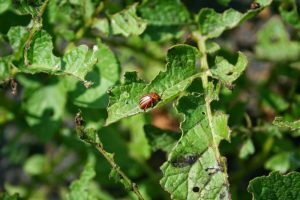