The Asian Lady Beetle is a small-size beetle that has a close resemblance to the ladybirds, well known for their beautiful, brightly-colored wings. Native to the eastern parts of Asia, it was artificially introduced to Europe and North America to control aphids and scale insects. Unfortunately, the species, in turn, became a pest itself, with most people, from farmers to commoners, often looking for ways to get rid of them from their infested farms or households.

Body: The body is hemispherical in shape, divided into head, thorax, and abdomen like most other arthropods. The underside of the stomach is always brown even in the case of melanic color forms.

Wings: Wing colors might vary significantly from light orange to dark red. The multicolored wings might have up to 22 black spots of variable sizes, or no spots at all (though rarely). 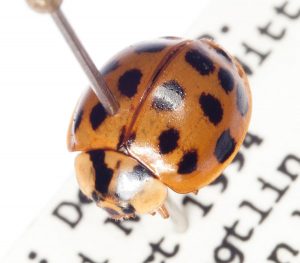 Feet: They have three pairs of reddish-brown legs that are hardly visible from under the body.

Sexual Dimorphism: The sexes are alike.

Apparently, the Asian lady beetle and the ladybug (ladybird) look similar, and it is tough to differentiate between the two. However, if you note once, you will be able to identify the two quickly. In the Asian beetle, you will find the characteristic large white “cheeks”, as well as a black ‘M’ or ‘W’-mark (depending upon how you look) just under its head. This feature is absent in the ladybird.

The Asian lady beetles can live for 30 to 90 days in the wild.

Basically, native to Asian countries like Siberia, Kazakhstan, Uzbekistan, Russia, south to the Himalayan mountain range to the Pacific coast including Japan, Korea, Mongolia, China, and Taiwan. They have been manually introduced to the continents of Europe and North America to control aphids and scale insects. 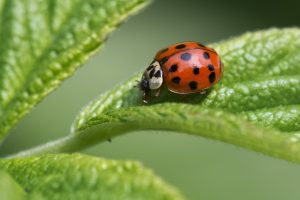 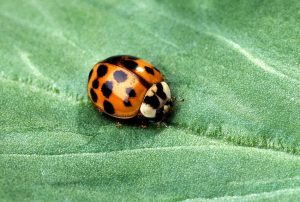 Like most other arthropods, the Asian lady beetles communicate through their chemical or sensory signals by secretion of pheromones, as well as through vision. Several types of pheromones are used for different purposes, like, signals during the mating season while interacting with the partner, detect or locate other individuals, etc.

The beetles congregate together and hibernate during the winter. Biologists have also discovered that specific pheromones have their effects on the behaviors of the creatures as well. The Asian lady beetles locate their prey, using olfactory detection, or their sight.

They are primarily insectivores, feeding on other insect species, terrestrial non-insect arthropods, as also their eggs and larvae. However, they also consume plant matters including pollen and fruits, including grapes.

Asian lady beetles keep breeding throughout their lifetime. When it comes to finding mates over close distances, they use their vision to find one. When there is no tentative mating partner around, they will use their pheromone secretions to attract one.

After a successful sexual encounter, the female undergoes internal fertilization of the ova. Studies suggest that females are often selective with their male partners. A male mate is often considered based on the color of elytra.

When it comes to mating, these creatures primarily follow polygynandry. One male or female would seek for multiple mating partners, copulating many times throughout the year. 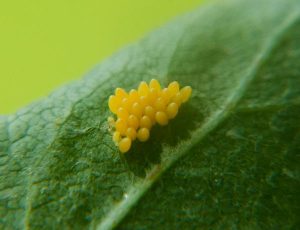 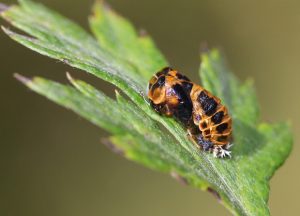 The females tend to lay eggs in clusters, with each one containing about 20 to 30 eggs. Asian lady beetles are holometabolous (i.e., undergoes complete metamorphosis). After hatching out of the egg, they undergo four larval instars, to the pupa, and finally to the adult stage.

The creatures are usually bivoltine, i.e., produce two broods in a season. However, up to five generations in a single year have also been noted. In the winter months, the adults diapause over a specified time period and get ready to lay eggs again by springtime, when the mean temperature begins to reach 12°C.

How are they Harmful: Does the Asian Lady Beetle Bite

The Asian lady beetles do bite if they feel threatened, or even if they land on your skin. So, the best way to resist them is to take the necessary steps to prevent these bugs from entering the house at all. Some people can also have allergic symptoms or reactions from these beetles, viz. eye problems like conjunctivitis, to hay fever, hives, cough, or asthma. Asian lady beetles can be a threat to the domesticated pets as well. 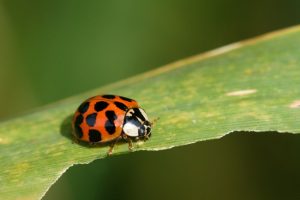 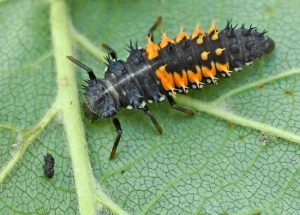