The Ghost Ant is an invasive species of tropical and subtropical ants that have been spread by humans, and are primarily found in parts of the United States. In fact, they are so widely dispersed that their original native distribution is unknown. Ghost ants are insects that fall under the same group ‘Hymenoptera’ that includes wasps and bees.

Head & Body: Ghost ants have a dark head and thorax, with a dull milky white or pale translucent abdomen like pharaoh ants. They do not grow wings. The head has two antennae that help them in moving.

Legs: Three pairs of legs are present that are almost transparent. 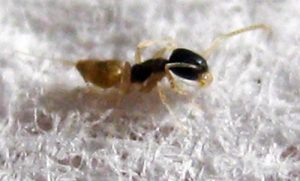 The exact lifespan is not known. However, they have a short life of only a few weeks.

The Tapinoma melanocephalum are primarily found in south and central Florida, as well as in Hawaii, and have been seen in and around the region for many years. Presently, they have extended in many other parts of the United States, including Texas (since 1994). They have also been found in Canada, Puerto Rico, Caribbean Islands, the Galapagos Islands, and other parts of the world.

Habitat: Where do Ghost Ants Live

They are mostly found close to human settlements, on the ground level or in trees, old branches, plant stems, moist grass, and dry grass clumps. Ghost ants can well become a severe house pest, and prefer nesting inside wall creaks, bathrooms, behind the baseboards, as well as in the mud of the indoor flowerpots. In the northern temperate regions of the US, they have been seen surviving only in warm greenhouses meant for plants, as well as in the heated buildings.

Since ghost ants are sweet eaters (as also prefer greasy foods), they will get easily attracted to the different smells of food that would eventually entice them to dwell in and around household kitchens and pantries.

These arthropods are mostly active during daytime (diurnal) and are social creatures. Their colonies are made of several queen ants and many male worker ants. Approximately, each nest house can have 100 to 1000 individuals. The workers are responsible for gathering honey-eating insects to feed the colonies. When disturbed, they have been seen running erratically to escape.

The colonies are often seen diverging into multiple nests, and it is natural on their part to trail between several nesting sites. They quickly get transported through crates, potted plants, packaging boxes, and various household goods especially through shipping, or even other modes of transport like cars or trucks.

When they make their colonies outdoors, they choose various sites in the ground level including piles of firewood, rock or stone cracks, or logs. The ants keep premade trails along the ground or building floors through which they enter houses. They would also follow shrubs or tree branches touching buildings, or even through the utility line cords around such apartments. 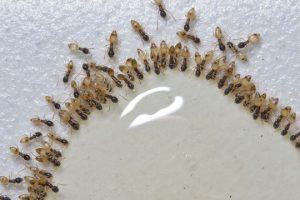 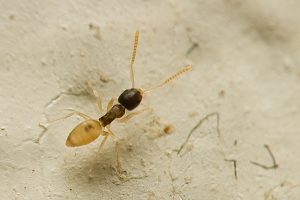 Do Ghost Ants Bite and are Dangerous Pests

Unlike the banded sugar ants, ghost ants can give a mildly painful, non-poisonous bite for resistance, or as a defense. These creatures do not usually bite or sting unless they are provoked, or their nests threatened. Their bites can inflict a little discomfort or itching, but there are no reports of any kind of skin reactions.

However, they do not damage furniture or pose a threat to household pets, as the raspberry crazy ants do. Their worst impact may be the transfer of organisms causing diseases. For this reason, many people use baits and various remedies to keep ghost ants under control or resist them from infestation, including the use of boric acid (borax).

Diet: What Do Ghost Ants Eat

Ghost ants are omnivorous, but mostly love to consume honeydew, which they can get from the plant-feeding insects. For this reason, these ants would often prey upon aphids (small plant-sucking insects) to collect droplets of honey. They also feed on other insects, both dead and live, and have been seen carrying droplets of blood. When they nest indoors, they mostly feast upon sweets in small groups. However, they do not chew or eat wood like the raspberry crazy ants.

The queen ants are polygamous and keep mating with the males of the colony to produce eggs. A queen can lay a large number of eggs that hatch into larvae after two to four weeks. These larvae transform into multiple baby ants, which in turn develop into the other colony members through the process of metamorphosis. This process of the formation of colonies is known as ‘budding’.

During this process, the queen would separate from the main colony with its group of male workers and form a new colony away from the main one. Since there can be many queens in a large territory, this process of budding can take place several times.

Other than humans, their primary enemies are larger ants, birds, frogs, some mammals, and various other species of reptiles like lizards, chameleons, snakes, etc. 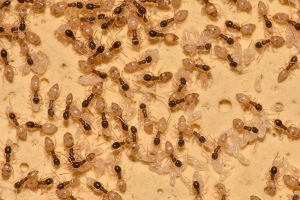 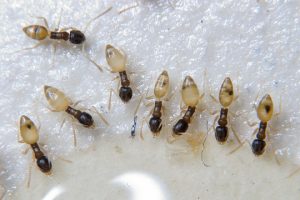 Ghost ants are considered an invasive species and are not subjected to conservation.