Bulldogs ants (Myrmecia) is a genus of ants known for their powerful stings and aggressive behavior  Their strong grip and savage biting behavior gives them their name ‘bulldog’.  They are also known as bull ants, jumper ants, sergeant ants and inch ants 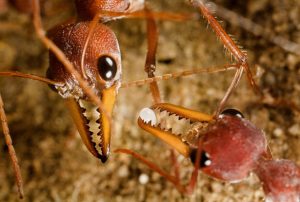 Have a look at the description of this huge ant.

Size: Bulldog ants are large in size and measures 8mm to 40 mm. The worker ants and the queens are of the similar size.

Eyes and Legs: They have large eyes and long hairy legs

Mandibles: Their mandibles are straight and long, located at the front of the head. These mandibles possess teeth along the inner lining.

Body: They have a stinger loaded with venom which is located in their abdomen at the tip of the gaster. These ants have the mesosoma which is attached to the gaster by two separate segments known as the petiole and the postpetiole. 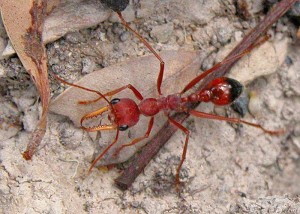 They usually feed on plant nectar, honeydew and plant juices. Sometimes they prey on other insects as well. They also feed on gum, fruits, fungi and seeds. These ants have their own dairy since they feed on sugar from the bugs that suck plant sap such as aphids just like milking cows.

The bull ants are found almost everywhere across Australia.

Bulldog ants are found in forests, woodlands, and heath. They make their homes underground which have expansive tunnel system with a small entrance.

These ants have certain adaptive features.

During certain times of the year, these ants develop wings. When the young queen is ready to mate she flies out to meet other males. These winged male and queens fly into the air and mate after which the males die. After mating, the queens’s wings fall off and she starts building an anthill. The fertilized queen starts a nest by digging small chambers where she lays her eggs. The queen spends her entire life laying eggs.

An ant’s life cycle passes through four distinct stages of egg, larva, pupa and adult. The eggs hatch into small grubs which grow into worker ants who expand the nest. The fertilized eggs hatch into females and unfertilized ones into males. The queen leaves the nest at night to find food for its babies. Forager ants who go out searching for food regurgitate the fluid food to feed other members of the colony. Young larvae are usually fed dead insects and grubs. In some species of bull ants, there are no colonies and the queen attacks the nest of other species to kill the queen before taking over the entire colony. 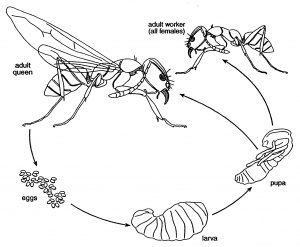 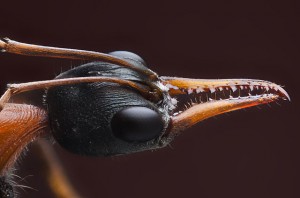 The bulldog ants live for 8 to 10 weeks passing through the four stages of life. However, in some cases, the queen ant may live for several years.

These ants are often hunted by ants of other species, birds, wasps and spiders.

They have been listed in the IUCN red list as Critically Endangered Species. However, no conservation measures have been taken yet.

Here are some interesting facts about these fierce little creatures.

Here are some images of Bulldog Ant. 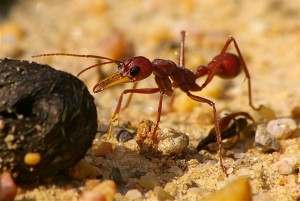 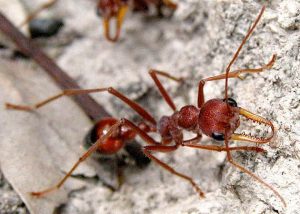 One response to “Bulldog Ant”