What Is a Ghost Crab?

It is a type of crab of genus Ocypoda that can be seen crawling along sandy shores in many parts of the US and Brazil. As expected, it is a member of the Decapod species. It is commonly seen on shores in many countries.

This animal has a pale body color that is similar to the color of sand. This makes it nearly invisible when it crawls about over sand. It is because of this apparent invisibility that the crab has got its unique name. The name is also suggestive of the fact that the activities of this creature are mainly restricted to night.

This animal has five pairs of legs. The first pair is called Chelipeds and is shaped like claws. The legs, when jointly used, can make crabs move in any direction – forward, backward or sideways. In male crabs of this species, one claw is slightly larger than the other.

It has large black eyes that are supported on stalks. Its eyes help it see in any direction. There are horns attached to the end of the eyes of male crabs. It is by these horns that the gender of a crab is recognized. The eyes of these creatures are sensitive to changes in light.

The large eyes of these crabs give them a wide field of vision. The eyesight of these creatures is very good. This helps them spot predators very quickly and find out any other threats.

It has a water-tight exoskeleton (external skeletal structure) which prevents the creature from becoming dry. The body covering also lends support to its muscles and organs.

With increasing maturity, the crab begins to lose its external skeleton. It comes off at a point, only to be replaced by a new, slightly larger shell. The new shell takes some time to harden and until that happens, the crab remains vulnerable.

This creature is found in sandy beaches of tropical as well as subtropical coasts. It can be found anywhere from the American Atlantic Sea, the Mediterranean Sea and the Red Sea to coasts along the American Pacific and the Indo-Pacific.

These crabs are usually found in sandy beaches and backshores where they live in burrows. Crabs usually burrow a deep hole to keep themselves cool during the daytime. They remain in burrows during daytime and when winter is at its coldest.

It is omnivorous, meaning it feeds on both animals and plants. It can also devour other crabs and detritus. The creature feeds on snails, clams, turtle hatchlings, lizards and small crabs. Ghost Crab foods also include organic matter. 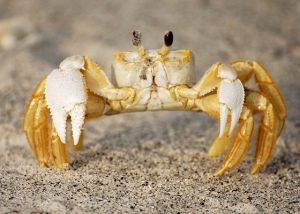 This is an exceptional creature that possesses the unique ability to store oxygen in airbags located close to its gills. When the creature buries itself in the sand during winter hibernation, it survives on this stored oxygen.

The crab can move on the sand at about 10 miles per hour and is able to change is direction suddenly.

It burrows into the sand at a 45-degree angle for a depth of up to 4 feet. It creates holes of 1-2 inch width. Adult crabs of this family occasionally dig a burrow with two entrance shafts.

The digging activities of these crabs have been reportedly heard even 2 meters (6.5 ft) away.

Ghost crabs generally look for food at night. This is also the time when they dig and repair their burrows. They search beaches for any animal or plant that has been washed ashore. It is rare to see these crabs during daytime as they are mainly active during the night.

Mature male ghost crabs neatly pile the burrowed sand next to their entrance. Young and female crabs do not make a neat pile and the sand they dig out is scattered in all directions beside their entrance. Female crabs can identify a male residence by the neat sand pile and get a mate for themselves.

Younger crabs burrow and make homes in the area of shore that is closer to water. Older crabs are seen to burrow away from water.

These crabs can make three types of sounds, by stroking their right claw on the substratum of their leg, by rubbing their legs together and through their gill chamber.

The animal breathes in through its gills. They periodically make their gills moist with seawater. The gill chamber produces bubbling sounds that can be heard by people who go for tanning at the beach.

The creature retreats to the ocean while laying eggs. The eggs of this creature turn into marine larvae.

This crustacean communicates through sounds with other members of its family. The creature has a unique mechanism on its right claw known as a Stridulating organ. When it strokes this against the bottom of its leg, a squeaky noise is produced. A crab produces this noise to warn other crabs not to enter its burrow. Male crabs also use this sound to attract female mates.

Ghost Crabs can make very good pets if properly looked after. If you are planning to breed these crabs in your home, here are some steps that you have to follow.

Female crabs of this species have a rounded abdominal flap. Thousands of eggs are incubated inside the flap. These are freed into the sea after being matured. The eggs mature into larvae at sea after over two months and then return back to the shore.

Studies have shown the density of Ghost Crab harvesting to be around 3000-5000 every km every year.

Know some of the most interesting facts associated with these creatures.

Want to know how these crabs look like? Here are some useful Ghost Crab Pics. Check out these Ghost Crab photos to get an idea about the appearance of these creatures. 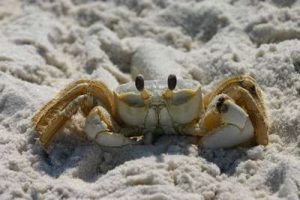 This crab changes its pace as its speed increases. It can walk for an indefinite period of time on four pairs of legs. At very high speed, it raises its fourth pair off the ground. At highest speed, it uses only the first two pairs of walking legs to keep running.