African leopards are one of the two big cats that inhabit the continent of Africa, along with the lion. The cheetah is also sometimes included in the big cat family due to their size, but it is technically not a big cat as it cannot roar. 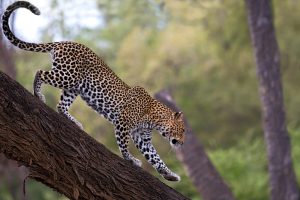 Color: Pelage varies from tawny to deep gold to a pale yellow with black rosettes that do not have a central spot. The head, belly, and the lower parts of the limbs have solid black spots. Melanistic African leopards are black all over the body, but on closer inspection and under certain lights the spots become visible.

Sexual Dimorphism: Males are larger and heavier than females.

This species of leopards are found throughout Sub-Saharan Africa.

They inhabit a range of habitats, varying from scrubland, semi-arid, savannahs, bush, riverine forests, mountainous lowland forests, and rocky outcrops. They prefer areas with above 2 in (50 mm) of rain and may be found at elevations of up to 18,700 ft (5,700 m). 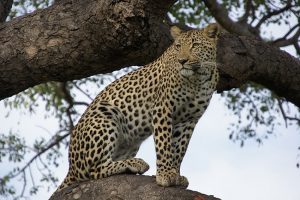 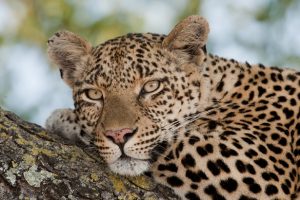 The African leopard is a carnivore with an extensively varied diet, ranging from dung beetles to young giraffes. It is a stalk and ambush predator, usually creeping up to about a few feet from its potential prey before making a final pounce and delivering a fatal bite to the neck, paralyzing the quarry. They keep their jaws clamped and eventually suffocate the prey to death. It is rare for leopards to chase after a prey after an unsuccessful pounce. Once it has successfully made the kill, a leopard will drag the carcass to a tree and cache it in a branch, away from the reach of other predators like African lions and spotted hyenas.

The prey base of an African leopard includes, but not limited to primates, gazelles, antelopes, pigs, and deer. They also may feed on reptiles, birds, insects, and rodents. Having opportunistic dietary habits, African leopards also take carrion.

African leopards mate year round but a peak in sexual activity is observed during the wet season. Females release pheromones to attract potential suitors. Copulation between African leopards lasts for 3 seconds at 6-minute intervals. They tend to copulate for a few days. The gestation period lasts between 90 and 105 days before a litter of up to 4 cubs are born. Some leopards have been seen giving birth to up to 6 cubs on rare occasions.

African leopards cubs are born with their eyes closed and with a weight of less than 2.2 lb. When going on hunts, females keep their cubs in dens, hollow tree trunks, and rock crevices to protect them from competing predators. Cubs can walk by themselves after 2 weeks and start eating solid food around 8 weeks old. They are weaned at 3 months old and leave their mother’s care when they are around 20 months of age. Males reach sexual maturity at 2.5 to 4 years old while females reach that stage between 2.5 to 3 years of age. 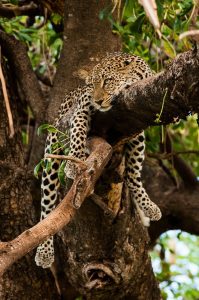 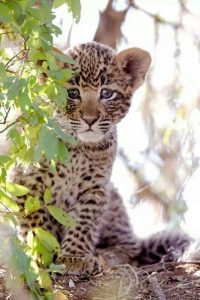 African leopards live for around 12 years in the wild. But in captivity, they can live for up to 21-23 years.

Being a member of the big cat family, the African leopard can roar. Besides roaring it also uses growls, spits and purrs to communicate with each other. They mark their territory with scent marking, droppings and a raspy cough like sound.

The only two predators of African leopards in the wild are lions and hyenas.

The IUCN lists the African leopard under their ‘Vulnerable’ category. There is an estimated population of roughly 700,000 leopards in Africa. 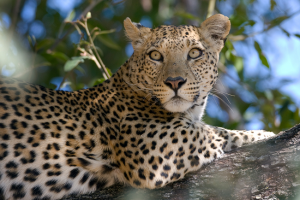 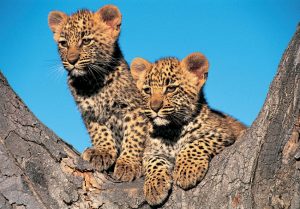