Aardwolf, also known as “Maanhaar Jackal”, is a small mammal species from the “Hyaenidae” family. This species has two subspecies which are the only remaining members in the “Protelinae” subfamily. It belongs to the same family as various Hyena species. Aardwolf is indigenous to the East and Southern Africa.

The two subspecies of this species are known as:

Their appearance resembles that of their close relative Brown Hyena. But, they are much smaller in size.

Weight: The weight of an adult animal of this species ranges from 9 kg to 14 kg.

Color: Aardwolves have tawny-brown to yellowish fur-covered bodies with vertical black stripes on the back. The upper parts of their legs are brownish and marked with dark bands while the lower parts are black in color.

Legs: Their front legs are slightly longer than the hind legs.

Mane: Distinct long manes run down the middle of their backs and necks. 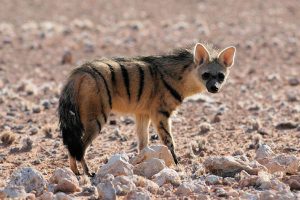 Muzzles: They have slender muzzles.

Ears: Their ears are long and pointed.

Tails: The bushy tails of these animals are 20 cm to 30 cm long with a black tip.

They inhabit open grasslands and scrublands with small trees and shrubs. The size of their home range varies depending on the amount of food available. Their habitat range may extend in a 1 km2 to 2 km2 area with high availability of foods.

Despite belonging to the family of Hyena, this species is insectivorous. Their diet mainly consists of Termites. But they also feed on various other soft-bodied insects such as maggots and grubs as well as their eggs and larvae. Occasionally, they hunt small birds and mammals.

The Aardwolves have a very interesting behavioral pattern: 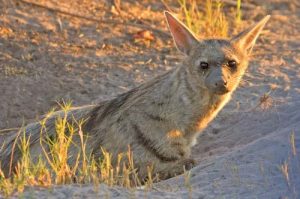 Various mammal species including Lions, Spotted Hyenas, Leopards and Wild Dogs are known to prey on them. Pythons are also known to be their predators.

The adaptive features of these animals help them to survive in their wild habitat:

Their mating season may vary depending on the distribution range. But generally, mating takes place during autumn or spring.

Both the males and females attain sexual maturity at 2 years of age. Unpaired male Aardwolves search for suitable mates in their own territories as well as other territories during the mating season. Dominant males often mate with the females from neighboring territories that are less powerful. This often leads to conflict and fight between the males with different territories. The gestation period for Aardwolves lasts from 90 to 110 days. The females give birth to 1 to 5 (most often 2 to 3) cubs during rainy seasons. This species usually does not reproduce during scarcity of food.

The Aardwolf cubs remain in the den with their mothers for one to two months after they are born. The eyes of the cubs are open at birth. These cubs begin foraging for food when they are 3 months old and become independent at 4 months of age. In most cases, they continue staying with their mothers until the next reproductive season. 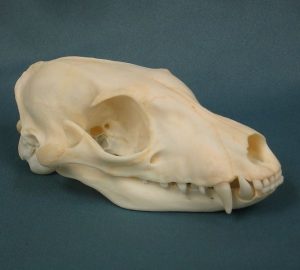 Their average lifespan ranges between 8 years and 10 years in the wild while they are known to live up to 15 years in captivity.

This species is listed in the “Least Concern” category by the IUCN as there are no immediate threats to their existence.

Find out some fascinating facts about these amazing animals:

Here are some images of this animal. 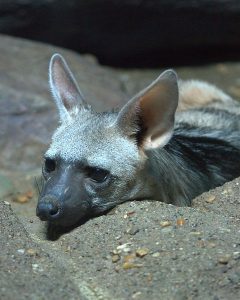