Golden Jackal is a medium sized jackal from Canidae family, known by different other names like Asiatic Jackal, common jackal and gold-wolf. It is a native to parts of Africa, central Europe, Southeast Asia and the Middle East. It is more linked with the coyotes and grey wolves instead of other jackal species. It is highly opportunistic when it comes to feeding. Several mentions of this jackal have been made in ancient texts in India and Egypt.

Some of the bodily attributes of golden jackal are:

Length of the adults ranges between 70 and 85 cm, with a shoulder height between 44 and 50 cm.

Females are lighter with weight between 7 and 11 kg in contrast to the males who weigh around 6 and 13 kg. 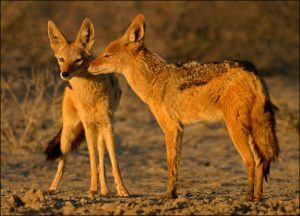 Fur color may vary, according to seasons. Overall, they appear golden or yellowish with the fur ranging from creamy to yellowish-brown shades. It has a back which is spotted with black, white as well as brown but ears, limbs and head are reddish brown in color.

It has a bushy short tail and long legs. The tip of the tail is black and this feature sets it apart from the other species of jackals.

Golden Jackals are distributed over a huge range in Africa, Europe, central Asia and Indian subcontinent. From Senegal to Egypt, northeastern and northern Africa has a large population of these animals. In Europe its range comprises parts of Ukraine along with Hungary Slovakia, Austria and Balkans. A significant rise in the number of jackals in Italy can also be noticed. Pakistan, Iran, Turkey, Lebanon, Syria, India, Thailand, Myanmar and Sri Lanka have fair distributions.

In the biomes inhabited by the golden jackals, construction of dens differs from one place to another. They prefer making dens in dense shrubs or leveled grounds including slopes. These burrows are almost 2 meters long, having a depth of more than 1 meter. In some areas, they are made in roots of trees and cavities of uprooted trees. They keep these hidden on the banks of rivers, below huge rocks.

Some of their Hunting/eating behaviors are:

Other behavioral traits include:

Diet of these animals is based on seasons and region they are living in. In India, they survive largely on birds, rodents, fruits and reptiles. Ducks, moorhens, hares, pheasants and rodents that look like mouse are being fed upon in the Caucasus region and south of it. A varied diet of fruits which include watermelons, pears, muskmelons, nets and many others is also consumed in these areas. Roots and bulbs of plants are also eaten in some areas close to the Vaksh River. Its feeding pattern changes in the Karakum Desert, where it hunts for snakes, lizards, muskrats and gerbils. Hence it is understandable how they survive on a variety of food as per their availability. 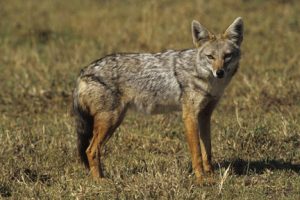 They emit sounds like that of the dogs. 7 types of sounds have been noted so far which is a characteristic mark of the subspecies. It resorts to long howls for calling each other and also on hearing sirens and sounds of church bells. Vocalizations are prominent in the evenings, afternoons and dawns. The leader of the pack emits a distinctive sound ‘okkay’ while initiating an attack.

It takes advantage of its flexible body and long legs for hunting and traveling with ease over several kilometers.

They practice monogamy, which implies that they remain loyal to their partners. For giving birth to babies, they mark a given territory and safeguard it from the predators. The female undergoes around 63 days of incubation to give birth to the pups in the den made underneath the earth.

When the pups are born, they have to wait for almost 10 days to see. Complete weaning occurs in the next 4 months, after which it attains the hue of the adults and a dark fur coat. They put up with the adults till the age of 2. By the time they reproduce their own, they help in raising the other litters born during that time.

In captivity, their life span might be 15 to 16 years but in the wild, it might be of around 8 years.

Around 12 sub-species of this animal have been reported to exist.

The pups can be easily tamed and raised.

Housing
Golden jackal can be kept in enclosures.

It can be fed with rodents, fruits and dead animals. 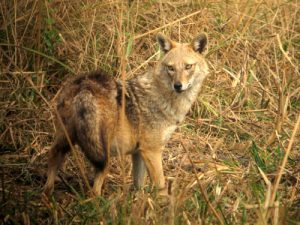 Apart from wild predators like leopards and wolves, they face enormous threats from habitat destruction and humans. In the presence of predators, they even have to strive to acquire food. Nevertheless, rabies and diseases are also common threats to their lives.

According to IUCN Redlist, this species of jackal is not endangered but listed under Least Concern animals.

Some fun facts that kids love to know about them are:

See how the Golden jackal looks in the pictures listed here. 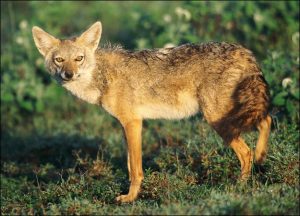