Waterbucks are large antelopes. They are found in two groups occurring as two different species. According to the African myth the meat of the Waterbuck is not edible because of the unpleasant odor produced by their sweat glands.

Height: A Waterbuck stands up to a height of 120 to 130 centimeters.

Body: Waterbucks are large creatures, having straight backs with shaggy and coarse coats. Males have sharp pointed horns which have ring like features and curved upwards and backwards. Females do not have horns and are therefore easily recognizable.

Color: The hue of their fur ranges from grayish brown to reddish brown which gets darker as they get older. The lower part of the legs has a black tone with white rings above hooves. 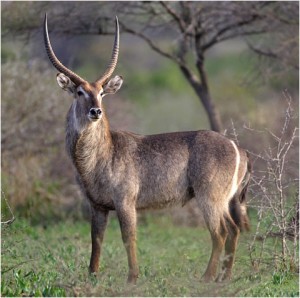 Head: Waterbucks have large rounded ears. There are white patches present above their eyes, around nose, mouth and on the throat.

The Waterbuck graze on a wide variety of grasses which are high in protein. When green grass is scarce they feed on fruits, reeds and rushes. Also, they drink plenty of water in unusually large amounts.

Waterbucks are found widely in Sub-Saharan Africa. The first group, Defassa waterbuck, is found in western part of Gregory, starting from Ethiopia to Senegal and towards Zambia in the south. The second group known as Ellipsen waterbuck is mostly found in south eastern Africa which spreads to Gregory rift and Botswana.

They mostly stay near water bodies due to the huge demands of water in their body. They can also be found in grasslands as a wide variety of grasses are a part of their diet. Thus, they are mostly found in savanna and woodland habitats. 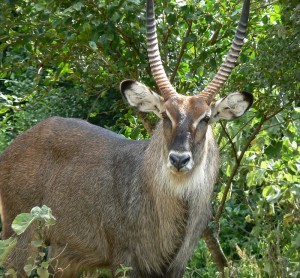 The Waterbucks have few adaptive features which help them to survive in their own environment.

Breeding among Waterbucks is carried out throughout the year since food is always available for young ones. However, mating activities reach a peak during winter. Near the equator the breeding is more perennial.

The young offspring, after birth, hides in the vegetation for the first two weeks. After this, the young one follows its mother into the herd. At the age of six months, the young one is weaned.

The life span of Waterbucks in wildlife is up to 18 years. If held in captive they live up to 30 years.

The Waterbuck is listed in the Least Concern by IUCN which means they are not yet endangered.

Here are a few interesting information about Waterbucks.

Have a look at some of the images of Waterbucks. 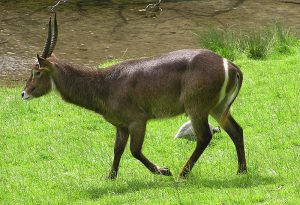 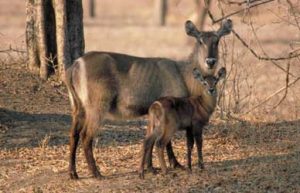