The Elephant Hawk-Moth is a species of common large pink and olive green moth that is widely spread throughout Europe. It is one of the brightest moths, and hence, is also popular in the pet trade. The larvae (caterpillars) of these moths are often found roaming in the gardens, feeding on leaves and flowers, during late summer. The moth gets its name from the elongated shape of its snout during the larval stage, which resembles the trunk of an elephant. 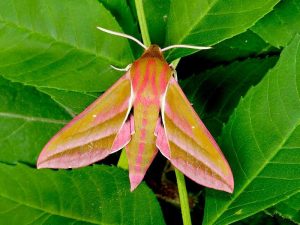 Body: Medium size body with a wingspan 62-72 mm. The head and thorax regions are segmented and are more slender than the rest of its body.

Feet: The legs are thin and pure white.

Eyes: The eyes of the moths are anti-reflective because of nanoscale protrusions.

This moth is most commonly found in England, Wales, Scotland, and Ireland and other parts of central Europe. The concentration becomes thinner towards the northern regions. However, their range also extends throughout Asia, up to Japan.

Habitat: Where do Elephant Hawk-Moths Live

Elephant hawk moths primarily prefer Rosebay Willowherbs, and can be found in a wide variety of habitats where this kind of vegetation is present including waste ground and clearings, hedgerows, rough grassland, woodland, heathland, sand dunes, and even in manmade gardens especially those that have bright, colorful flowers. 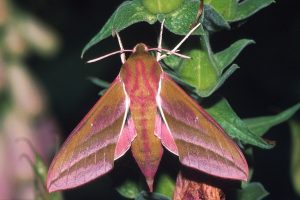 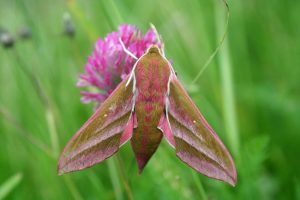 The life expectancy of the adult elephant hawk moths is up to 5 weeks.

These creatures lead a solitary life. The peak time for these creatures is between June and September and is rarely seen during winter. Like most other moth species, the adults are nocturnal and often go unnoticed unless they are attracted to bright lights. They begin flying from the dusk and stay active all night, finally coming to rest by sunrise. These moths spend the entire daytime on food plants. 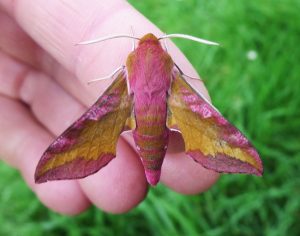 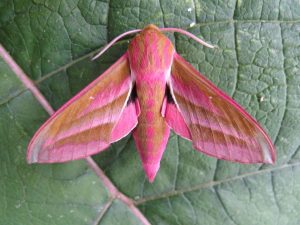 Diet: What Do Elephant Hawk-Moths Eat

Unlike the caterpillars, which feed on plant matter including bedstraws, willowherbs, fuchsias, and gooseberry, the moths live only on nectar. Very much like the butterfly, they visit from flower to flower suckling on the nectar at nighttime. They are mostly attracted to flowering plants like honeysuckles.

The female elephant hawk moths are relatively less bright. When the breeding season arrives, it gets attracted to the brightly-colored males. After mating, the female would lay eggs either in pairs or singly atop leaves and flowers so that, these plant matters can be a source of food to the young caterpillars. The eggs of these insects are light green with a glossy surface, and take around ten days before hatching.

The caterpillars are generally blackish or dark brown in color, but also green at times. They are found between late summer and early autumn before metamorphosis, after which, they assume the chrysalis (pupa) stage. They finally hatch out as brightly-colored moths in around May of the following year. 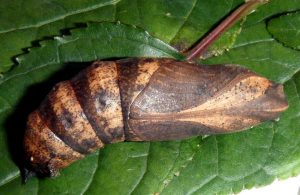 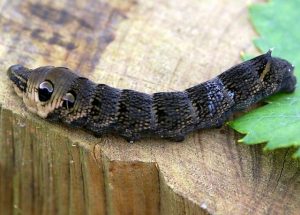 The primary enemies of these moths are spiders, especially the brown huntsman spider that shares its habitat. The moths get lured to the bright white forehead stripes of these creatures in the dark and are soon eaten. Different species of nocturnal creatures, including owls and bats, also prey upon these moths.

This species is common and have not yet been listed on IUCN’s Red List. 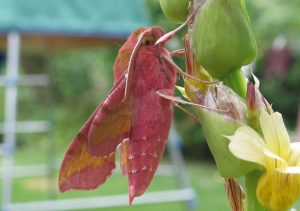 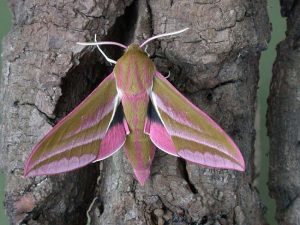