Polyphemus moth is one of the largest moths, having a huge wingspan. It is a member of the Saturniidae family, which is known to be the greatest silk moths. It depicts eye spots, which is one of its primary identification features. It draws its name from Greek mythical stories.

Eggs : Eggs are 3 mm in size with a thickness of more than 1 mm, in cream coloration.

Larvae : These grow up to around 75 mm in length and a fully grown larva has a reddish head with a yellowish green body. The body is segmented which contains tubercles in orange and yellow.

Moth : The following are the physical features of the moths:

Wingspan : Moths have a wingspan of more than 5 inches. 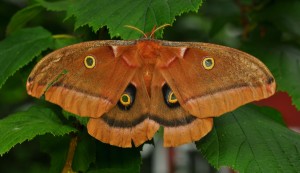 Color : Wings of these moths have a blend of yellow and brown. On the wings there are white and black lines. One of their most distinct features is the eye like spots on the wings. The hind wings have larger eye spots in yellow, black and blue colors. Whereas those in the front wings are small and yellow colored.

Other Features : Males have big antennas which sets them apart from the females.

This silk moth is common in the United States, Mexico and south Canada. It is highly prevalent in its range across America. It is commonly found in its range barring few like Prince Edward Island and Newfoundland.

They dwell in deciduous hardwood forests, wetlands and orchard apart from urban areas. They have several host plants where they lay their eggs. 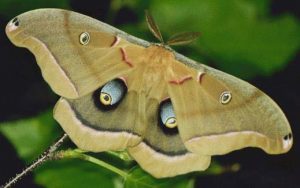 The caterpillars subsists on the host plants, by its eating the foliages of beech, birch, oak, maple, willow, honey locust, walnut, lemons, American elm, plum, pears and a range of other trees. When they hatch out of eggs they eat those shells that they were in. The caterpillars keep on munching on leaves and end up cutting the petiole which makes it fall on the ground. Once they attain adulthood, they do not eat anymore. The caterpillar is a voracious eater, gorging on leaves at a rate exceeding 85,000 times than its weight in a couple of months.

Usually as caterpillars they face threats from birds, insects and small mammals. A wasp is also known to be dangerous to their existence. It is a parasite which can create menace by injecting eggs  into its body.

During the mating season, males fly long distances to find a partner. This usually happens in the midnight. Mating generally takes place during early summer. The females release pheromones which have a distinct smell. The males get attracted to this scent and proceeds with mating.

It seems that the short-lived adulthood is only for them to reproduce because after mating and laying eggs they die. It engages in mating after some mating rituals and the lays eggs on the part below the leaf. It lays around 4 to 5 eggs on it, which hatches around 12 to 14 days after.

It has the same life cycle like other mates of its family. Yellow colored caterpillars born from the eggs laid on the host plants. They feed on the shells of the eggs from which they emerge till 2 weeks from deposition. Before it is grown fully, it molts 5 times. 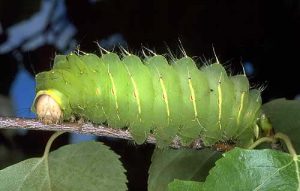 The host plant serves as the foraging ground, which nourishes it to attain the size of about 4 inches. After encasing themselves in the host plant, they begin on the journey of spinning brown silk cocoons. It finally becomes the pupa on the fifth molting, which also changes its color to a very bright green with dots of silver on its sides.  These cocoons sometimes fall to the ground or hang from the branches till winter ends. Till the end of the month of May, the Polyphemus moths live in the cocoon.

As adults they do not live beyond 5 to 6 days. From day one till it completes it metamorphosis completely, it lives for around 70 days.

For keeping them as pets, these guidelines can be followed:

Housing : For providing the perfect space to mate, the metal cage should have holes of correct sizes for the male and female to mate.

Care : You have to take care of the eggs, first by putting them in small pot and then raising them outside as larvae.

No data from IUCN seems to be available to shed light on its status.

Here are some images of this moth. 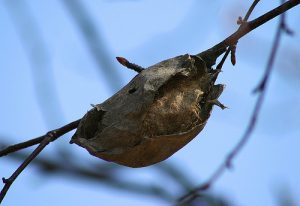 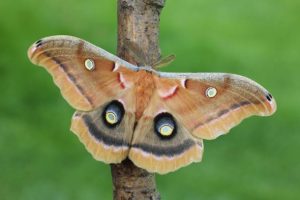