The Atlas Moth is the world’s largest moth in terms of their wing surface area, and second largest by wingspan (only next to the white witch moth), endemic to the Southeast Asian countries including India and China. These dazzlingly elegant and beautiful creatures are known for their multicolored wings that give them their characteristic bright looks. This saturniid moth is also known for its extremely low lifespan, and the absence of a mouth. The Atlas Moths are found throughout the year; however, they are most abundant between November and January. They are also popular as pets, since it is easy to keep them, and they do not try to escape.

Wing Color: The dorsal side of the wings are copper to reddish-brown having black, white, and pink to purple lines, and various geometrical patterns with black borders. Both the forewings are prominently protruded out at the top tips. The ventral sides of the wings are lighter or paler. 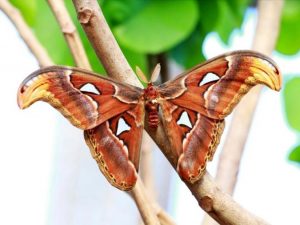 Weight: Owing to its large size, the moth weighs heavier than almost all known moth species, with the males weighing approximately around 25 grams and females around 28 grams.

Sexual Dimorphism: The females have bigger, more massive bodies than males as well as larger wingspans; however, the antennae in the males are broader.

The atlas moth has an extremely short lifespan. As an imago, these creatures would live for about two weeks only.

Distribution & Habitat: Where does the Atlas Moth Live

Native to India, China, Malaysia and Indonesia, this creature has a wide range of distribution, and is endemic throughout the dry rainforests, secondary forests, and shrublands of the tropical and subtropical areas of Southeast Asia, and is the most common across the Malay Archipelago. 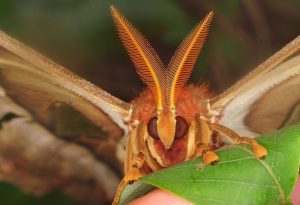 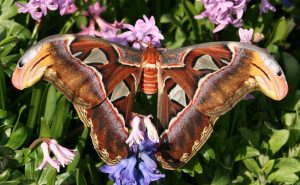 Atlas moths, like most other moth species, do not have very good eyesight, and are primarily nocturnal, seldom moving out during the daytime. This action helps them preserve their energy for the act of copulation, which usually takes place at night.

In fact, these moths do not fly far from the place they hatch out. This is because they are not good fliers, nor do they have enough energy for long journeys.

Diet: What Do Atlas Moths Eat

Interestingly, the imago of this creature does not have a mouth at all, and hence, the caterpillar must consume large quantities of food for storing enough fat for its further life as a moth.

The caterpillars of these giant moths eat leaves of citrus fruits, willow, cinnamon, guava, Jamaican cherry and different other leaves of evergreen trees. 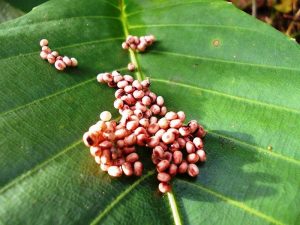 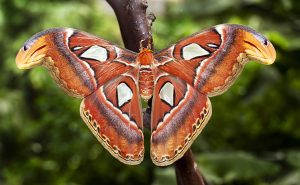 The only purpose of the atlas moth is to fly around in search of a mate and beget its own kind. The entire process of coming out as a winged creature and mating, takes about two weeks. During this stage, the moth depends entirely upon the energy stored up during their larva (caterpillar) stage.

The female atlas moths attract males by releasing pheromones through a gland located at the tip of the abdomen. The male atlas moths, in turn, can get the scent from over a few kilometers downwind with the help of their large feathery antennae. Once they finish breeding, the females lay eggs, soon after which they die.

The female moth lays around 200 to 300 eggs at a time at the underside of leaves of consumable plants, each of which are about 2.5 mm large. It takes about a fortnight for the insects to hatch out. As the larvae attain a size of about 4.5 inches, they form 7-8 cm long silken cocoons among plant leaves to metamorphose as pupa, and attach the same to the twig with the help of a fine, silken string.

The chrysalis spends about a month inside their cocoons, after which they are reborn as atlas moths, breaking out of the cocoon. However, quite unfortunately, this state is extremely short since an imago typically dies within one to two weeks. 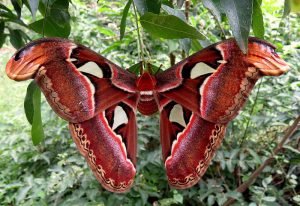 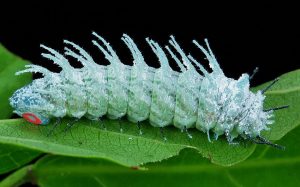 The species lies at the bottom of the food chain and is consumed by almost all insectivorous predators. They are also captured by humans to be sold live or dead to be kept as pets or in frames for show. 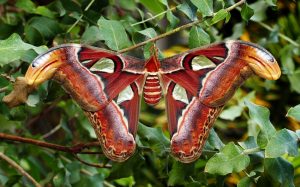 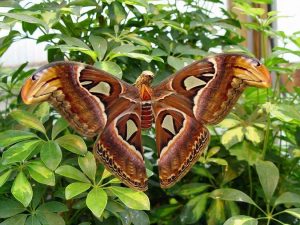