The Death Head Moth, also called the Death’s-head Hawkmoth, is a genus of moths with three species falling under them. With almost the same characteristic features, this group of well-known moths gets their common name ‘death head’ from the unusual skull pattern or patch at the dorsal side of their thorax. They are also a favorite subject of taxidermy, as well as in the pet trade market around the world.

Body & Wings: The body is stout with a bullet-like shape, with two long, narrow forewings and two shorter hindwings. 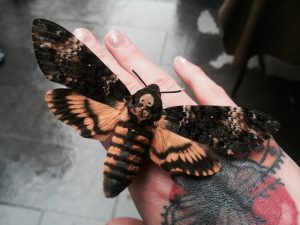 Fur/hair: The entire body is covered with fine velvety coat.

Eyes: Possess compound eyes like most other flying arthropod species. The eyes are shiny and black.

The adult death head moths can live for up to 6 weeks. The European species is unable to survive winters in the UK.

The genus has three prominent death-head moth species grouped under them:

1. The Acherontia atropos (common name: African death’s head hawkmoth) – found primarily in Europe, parts of Africa and even in some parts of Asia, like India, Saudi Arabia, etc., with a very small migrating population;

Habitat: Where do Death’s-head Hawkmoths Live 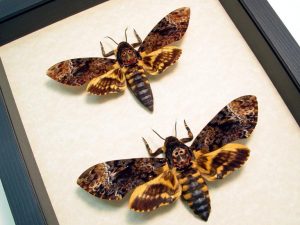 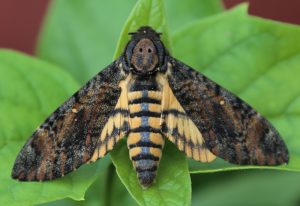 Death head moths are nocturnal and are mostly seen in light traps or beehives in search of honey. These creatures pollinate flowers like several petunia and orchid species while sucking nectar from their flowers. When they gather nectar, they can hover over the flower like hummingbirds.

All the species of these arthropods have been studied raiding beehives made by several honeybee species for ‘stealing’ honey. However, the A. atropos species attack hives of the Apis mellifera, commonly known as the western honey bee.

When provoked or irritated, the members of all the three species emit a shrill chirping noise. Though, this is not an oral call but is rather produced by inhaling and expelling air that vibrates their epipharynx. The squeak lasts for about one-fifth of a second.

Diet: What Do Death’s-head Hawkmoths Eat

The adult death head moths primarily live on nectar from flowers, as also, honey that they retrieve from beehives. The primary host plants of the caterpillars are potato, deadly nightshade, and a few other Solanaceae, as well as Verbenaceae, Oleaceae, Bignoniaceae, and others. 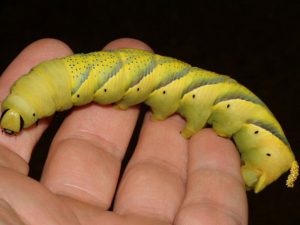 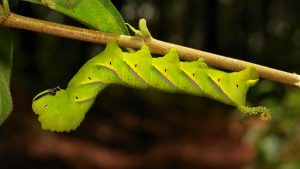 After a successful mating of between the male and the female death head moths, the latter lay eggs singly under old leaves of some host plant. The eggs are green or grey-blue. The larva (caterpillar) of the death head moth is hardy with a length of around 120 to 130 mm. They have a distinct tail horn.

The larvae of the three species have three typical color forms – green, brown, and yellow. There is less movement in the worms. The insects would click their mandibles and would even give a bite if threatened. When they are grown entirely after around 3 to 5 weeks, they dig burrows underground, excavating a small chamber where they metamorphose as a pupa and hang from the ceiling in the cocoon between August and October. The pupal stage lasts for about three weeks. 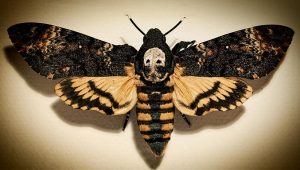 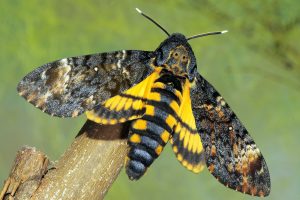 The primary enemies of these moths are birds, amphibians like toads and frogs, spiders, lizards and other local reptile species. 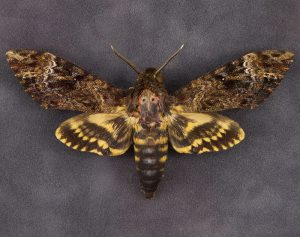