The Peppered Moth is a species of temperate black and white moths that are widely spread in various parts of the world. The most important thing about the peppered moths is their ways of evolution by natural selection. Quite interestingly, these insignificantly small creatures are able to camouflage cryptically against their backgrounds, as they hide while resting in the barks and branches of trees. Thus, these creatures became an outstanding example of a rapid evolutionary change in a localized area.

At present, there can be two varieties: The melanic carbonaria (black) morph, and the light-colored (white) morph.

Wing Color: It resembles a butterfly and typically has long speckled black-and-white wings. 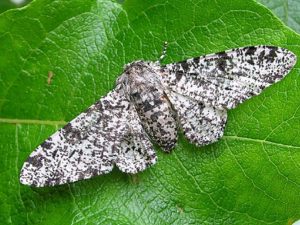 Body: A characteristic feature present in their body is the frenulum that serves as a link between the wings. The body is brown to tan in color with very elaborate patterns, thus blending evenly with their surroundings.

Eyes: Have compound eyes like most other insect/arthropod species.

Sexual Dimorphism: These creatures are sexually dimorphic with only the males having two thick, feathery antennae.

Like most other butterflies and moths, the peppered moths live for about 8-9 months. Some specimens have been seen to have lived for almost a year in the lab, or in captivity.

Habitat: Where do Peppered Moths Live

These creatures are widespread in shrublands, parklands, and some populations are more frequent in the deciduous and mixed-wood forests. 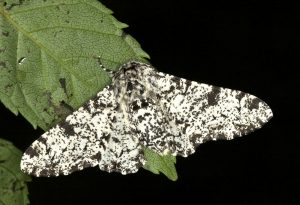 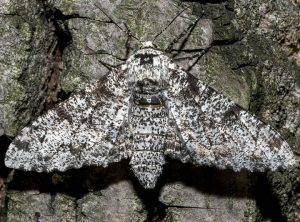 The peppered moths have been classified into seven different subspecies by the biologists:

Like most other moth species, the peppered moths are nocturnal and come out at night when the climate is relatively cool. They rest all day in the woods hiding from predators, particularly birds, no matter it’s a mating pair or a lonely individual. However, when they pair, the male would stay with the female peppered moths to ensure paternity. These insects would do most of their flying at night. 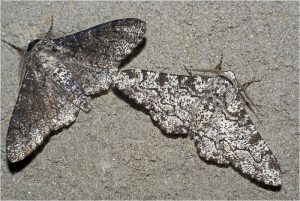 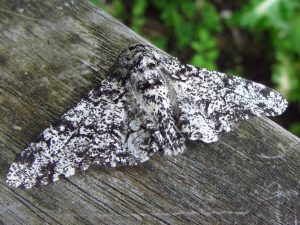 Diet: What Do Peppered Moths Eat

The caterpillars would feast upon a wide range of deciduous trees and shrubs while the moths usually consume flower nectars, fruit pulps, leaves, and sometimes, plant seeds.

Peppered moths are single-brooded – reproducing only once a year, while the adult moths are seen flying between May and August, mating with each other. The female peppered moths lay up to 2000 eggs in clusters, giving birth to caterpillars between 10 to 14 days. The caterpillars mimic the twigs or branches of trees.

Soon after hatching out, the caterpillars disperse from each other very soon. They move by crawling fast from one place to another, through the leaves and branches. Before transforming itself into a pupa (chrysalis), each caterpillar spins threads of silk and floating downwind landing somewhere by chance.

The insects, at this stage, are nocturnal, and would only consume food after sundown. Within a month’s time (by September), they are fully grown, and finally takes the pupal form, hanging itself from branches of trees. This stage lasts until the winter months are over, while the moth emerges in the next spring. 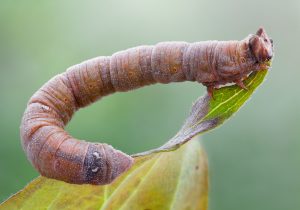 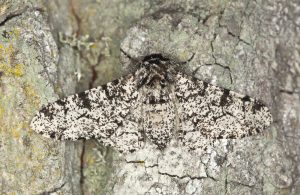 Before 1848, the peppered moths mostly existed as a white morph. However, since that year, a new dark morph was spotted in Manchester, England. In 1898, exactly 50 years later, the scientists calculated that the black variety outnumbered their light counterpart in a conspicuously striking ratio of 99:1.

The scientists were more than surprised with this strange chromosomal alteration, as they explained it as ‘chance mutation’ with the advent of industrialization and the resultant pollution. In this context, biologists had conducted several lab experiments to study the peppered moths to get a clear picture as to how they simulate their surroundings with respect to the environmental changes. They observed how species are able to change (mutate) over a period of time due to factors like pollution and predation.

The cause for this genetic mutation was then explained, as the Industrial Revolution took over the western world, resulting in the deposition of soot and coal particles, covering the greens, and eventually killing the light-colored moths.

Such a mutation practically rendered such pigmentation to these insects so that they get the natural privilege by being able to camouflage themselves perfectly from the birds and various other predators.

The chief enemies of the peppered moths are bats since these insects, too, are nocturnal. However, next in the list are the species of birds that are chance predators, including robins, great tits, and flycatchers, and can trace them hiding amidst the barks and branches of trees, or else, glued in secretion from the tree trunks. 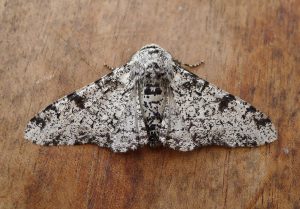 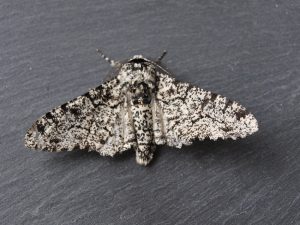 This species has not been officially classified by the IUCN 3.1; however, these moths are rapidly declining in numbers.