Trumpeter swans are the largest swans amongst all of North America’s waterfowls. It is one of the heaviest species of flying birds. This elegant bird got its name from its call. Their call sounds like trumpets. Find out all about this marvelous and beautiful bird below.

Wingspan : Wingspan of an average adult of this species of swan is 6.7 ft.

Body : This species is large in size. Their bodies and heads are connected by a log upright held neck.

Head : Their heads are small and round shaped. They have two, round and black eyes on two sides of their face. Their long, black bills start almost from corners of their eyes.

Feet : They have one pair of padded, webbed toes that help them swim in water as well as walk on land.

Color : These swans are clean white all over their head and body. Only starting from corners of their eyes till the end of their bills are black. 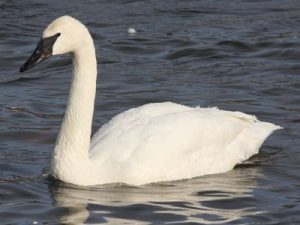 These swans call making a hollow and nasal honking sound. While flying they make a raspy noise to let their fellow beings know about the departure. Their call resemble to mild trumpet beats.

These birds fly at a speed of 40-80miles/hr. They mostly fly in flocks, being very social in nature.

They are found mostly in isolated parts of western Canada, North America and western parts of U.S.A.

During summer days theses swans inhabit shallow forested lakes, marshes and swamps. During the fall these swans move to sheltered coastlines and estuaries. 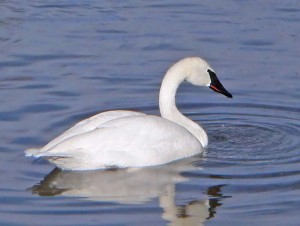 These swans have many predators on land, sky and water.

Given the long list of predators of Trumpeter Swans mother nature has also endowed this species with some adaptive features enabling them to defend or prevent themselves from danger.

These swans mate mostly between the months of April and May.

Trumpeter swans are monogamous in nature, which means they mate for lifetime. Their courtship begins at the age of 2-3yrs. They build their nests on muskrat lodges. They also nest in places where the water level is maximum 3 ft. deep. They are very territorial beings. They use the same nest over and over again.

Females of this species lay about 3-12 eggs per breeding season. Incubation period usually continues till 32-37 days. Both the parent swans raise the young ones.

The tiny hatchlings start swimming out after 2-3days of hatching out into the light. They start looking for food. The parent swans train them by breaking small aquatic planktons and other plant materials, releasing them to float around water.

First feather appear on the young ones after about a month from hatching and they get covered with feathers all over them after about 10 weeks.

By the age of 15 weeks the young swans start learning flying. By this time they weigh about 9 kg and are close to adolescence.

Male Trumpeter swans live for about 30-35 years. Females have a life span ranging between 25-28 years.

According to IUCN records these swans come under the Least Concern category. This species is absolutely safe, given the easy availability of their diet and unthreatened habitat condition.

Trumpeter swans are very easy to take care of and extremely fun to play with. Read their care sheet below.

Trumpeter swan is a beautiful bird. It is as interesting in its characteristics as a treat to eyes. Find out some extremely interesting things about this beauty.

Here are some beautiful images of this bird: 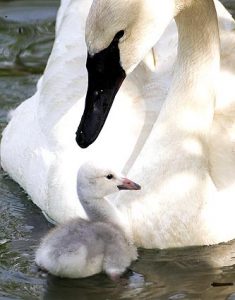 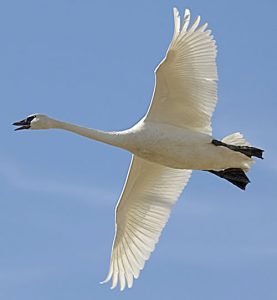 One response to “Trumpeter Swan”